ok, so I've dumped my sister...maybe next I'll ring up Grandad and tell him I think he's a boring twat

When I last wrote, on Thursday afternoon, Nic and I were getting ready to go to London for my surpise birthday treat. And it was a good treat! When we arrived in London we checked into our hotel, the Travelodge near Tower Bridge. I think Nic was feeling a little bit nervous about this because he had read some bad reviews of it, but it was fine. I haven't stayed in enough hotels to be too snobby about it, and although it was very basic it was clean and near where we were going. We walked down to Tower Bridge and crossed the river, which was exciting in itself as the bridge was being raised for a boat with a tall mast to pass underneath. We had dinner and then walked along Butler's Wharf, where Nic revealed my surprise to me - a cruise on the paddle steamer The Dixie Queen! The cruise had been organised by the Vortex Jazz Club, and was in fact a jazz cruise. We boarded the boat at Butler's Wharf just as the sun was setting, and had time to explore around the boat a fair bit before we started to move. Thrillingly, although we were going to Canary Wharf, we first went West, and Tower Bridge was raised for us. The sun had set, and Tower Bridge was all lit up. Everybody crowded out to the front of the boat, it was spectacular. 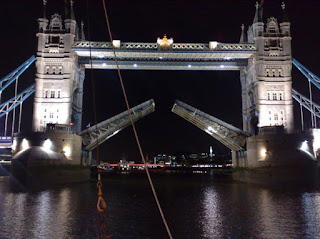 I couldn't get my phone to take a good picture of what the ballroom looked like, but it was very luxurious. Nic and I settled down at our table to enjoy the first perfomer, Barb Jungr. She was absolutely brilliant, opening with a version of Walking in Memphis and finishing off with Last Train to Clarksville. This was the first time I have been to see a female Jazz performer, and she was outstanding. After her set, we went back outside to enjoy the view some more 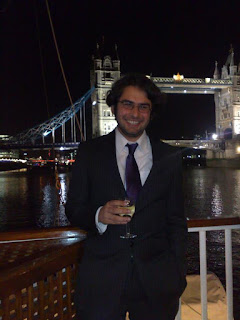 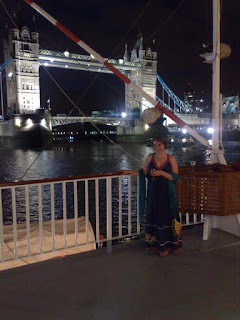 We went to the back of the boat and had a look at the paddle, and then settled back at our table to watch Lianne Carroll, who was also an incredible performer. I'll be buying some CDs when I get paid! I'm not enough of a writer to do the experience justice, but I have beautiful memories of the evening. It was one of the most romantic evenings I have spent, it was magical. When we docked back at Butler's Wharf, Nic and I walked along the river and had a drink in a pub near the HMS Belfast before heading back to our hotel.

On Friday morning we had breakfast in Spitalfields Market, in a cafe called The Daily Grind. It might have been because I was feeling a wee bit hung over (how though? I only had two glasses of wine and a gin and tonic, and I didn't even finish the gin and tonic. Although the gin was Bombay Sapphire, the tonic was Slimline Britvic - BOKE!) but the cup of coffee I had with breakfast might have been the best I've ever had. Seriously, it was just filter coffee with a bit of warm milk in in, but it was delicious. It set me up for the rest of the day! After a browse around the market, we headed over to Notting Hill because there was a comic shop Nic wanted to visit. The sun was shining, and we spent a very pleasant few hours looking at the antiques stalls on Portobello Road. I stumbled on the Hummingbird Bakery and bought some cupcakes (vanilla with chocolate frosting, and carrot cake with cream cheese frosting) which Nic and I enjoyed with a cup of tea when we got back to Leamington: 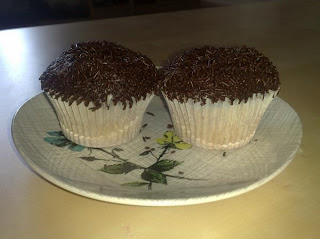 We caught a nice early train back to Leamington after making a stop at the International Cheese Centre in Marylebone for sandwiches and Tayto crisps. We'd only been in London for 24 hours but it felt like we'd been away for ages! We were both exhausted but spent a very happy Friday evening with M, J and L watching R Kelly videos on YouTube. It was wonderful, and I still had the whole weekend ahead of me. I do generally have quite mixed feelings about London - a trip down never quite lives up to my expectations. Perhaps because I didn't really have any expectations this time (because of the surprise element) it was perfect. I love just wandering around and making discoveries - such as discovering that George Grossmith lived in a house next to Marylebone station.

I was extremely good and the only things I bought were those cupcakes and a Marilyn French book (which was 50p) so I think I can buy myself something very pretty in October by way of reward.

I'm planning out something more intellectual for my next post, but it is going to take some time. Until then, just an account of my weekend will have to do, I'm afraid!
Posted by Roisin Muldoon