I'm not crying, I don't know what this is. I didn't even cry when I got shot!

I had originally planned to write something yesterday, but I had a very discouraging day at work, which made me want to curl up in my pyjamas and eat chips, which is just what I did. Normally my job is very enjoyable but yesterday I had to phone some local councils for information. I thought this would be quite easy, but I was wrong. In the main, it was just frustrating as I was bounced around from department to department, but I encountered one or two unhelpful people, and one man who was rude in the extreme. I'm not going to name names or anything like that, but I was flabbergasted to be spoken to so rudely by a representative of a local authority. I think maybe I am too easily annoyed by this sort of thing but it really put a cloud over the rest of the day for me. I used to work in a call centre, in a customer services context, so I have encountered rudeness like this before. I used to deal with rude callers by being extra polite, and this is what I did yesterday as well, but it really did affect my mood, and then my mind turned to maudlin thoughts, and everything seemed a bit shabby and crap.

Thankfully Nic was on hand to take me out for a walk and cheer me up, and talk through my negative thoughts with me, and I do feel a great deal more positive today. It helps as well that I am sitting next to a very friendly and cheery colleague, and that my work today has been much more interesting. I have written before how external things like noise can have an adverse effect on my mood, and this is the case here too. I don't know how to filter out the various irritants of modern life such as rudeness, they leave an emotional mark on me like a rash which itches for a few days before it dies away.

I have been re-reading The Diary of a Provincial Lady by E.M Delafield. This book always makes me feel better about life in general because it is so funny, but it is also reassuring that feeling stressed in public situations and awkward in social situations is what everyone feels. I never feel graceful, ever, and the Provincial Lady's struggles with similar feelings is comforting reading. On our way to Sainsbury's on Sunday, Nic and I called in to the tip shop (I love the tip shop) and I found a lovely hardbacked edition of The Lonely Lady of Grosvenor Square by Mrs Henry de la Pasture, who was E.M. Delafield's mother, I'm interested to see what that one is going to be like. I've gone a little bit off topic, I don't quite know how I got social awkwardness out of being annoyed by the extraordinarily rude man on the phone!

Socialising and social grace is something that has been on my mind recently, maybe because I have been reading Provincial Lady. I had a birthday party on Friday evening for my dear friend Tom. I enjoyed it very much and think that he did too, and I have been thinking about it off and on since then. Tom provided me with the guest list, and there were a few people on there who I don't know at all. In the event, only one of them was able to come and he was very charming, but I was very nervous about meeting new people for some reason. It was needless nervousness, in the event, because the party was very enjoyable. C, M and I had baked Tom a Dalek shaped cake the night before the party and despite my many misgivings about presenting it, Tom liked it and it was pretty tasty! I took some pictures of it, but will resist posting them on here because I don't really want to see them ending up on Cake Wrecks

I'll move on from the topic now as my mind is a little fuzzy....

Last night Nic and I watched Working Girl, which he had bought on DVD on impulse. It's a film I've seen a fair few times now, although not for a few years, and I was very pleased by how much I still liked it. For one thing, it was David Duchovny's first appearance on screen (setting him off on the path to Californication so it gets my vote) The film has its flaws, in the way that lots of 80s movies do, but I think it has charm, and I like the way that it refers back to the screwball comedies of the 30s without hitting you over the head with it. Also, Joan Cusack is absolutely brilliant: 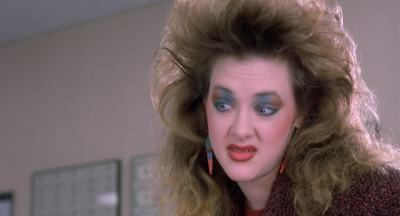 Sometimes I sing and dance around the house in my underwear. Doesn't make me Madonna. Never will.

I think the next 80s movie Nic and I will watch will be Big. It's another one I have seen many times, but not for a few years, and one that I hope I'll find as enjoyable as Working Girl. 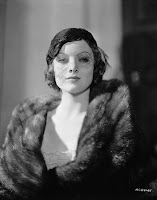