I'm going to tell you the same thing I told Al Minzer and his pyramid of dogs: take any job you can get, and don't make on the floor.

Hello all! I am in the middle of a much-needed few days off, hence the blogging hiatus. I hope you all had a very happy Easter! Mine has been suitably relaxing and the extra few days off have made it even nicer. That said, I have been pretty busy and haven't had quite as much time for lolling around the house in my pyjamas as I imagined I would. If the blog entries where I tell you what I've been up to bore you then I advise you to look away now, because here's what is the craic with me.

On Thursday afternoon we managed to get our meeting wrapped up nice and promptly and so I was on the 5:00 train out of Marylebone. This was especially good because Nic and I were heading to The Red Lion in Hunningham with Sugar Plum, N and Tom for dinner. You guys, if you live local to Leamington at all I cannot recommend The Red Lion highly enough. It used to be a biker pub, owned by the guy from Boon but now it is run by a lovely man named Sam. It is in a gorgeous country setting, with a good selection of drinks and some amazing food. Nic, Tom and I all had the vegetarian fish and chips, which is battered halloumi. It is SO TASTY that my mouth is watering a little bit just thinking about it. Anyway - we had planned to have dinner there, so I was very glad to get home in reasonable time to have a shower and get changed and I felt very refreshed and ready for my evening. We had a blast, the pub is gorgeous but the company is the thing, and it made me so happy to be at the pub with such awesome people.

On Friday, Nic and I had a reasonably lazy morning before heading to Birmingham for the day. It was a bit cold and drizzly, and we didn't find the vintage shop we were looking for in Moseley, but we did have a lovely dinner in Urban Pie and a nice look around the shops. I bought myself a copy of Adrian Mole: The Wilderness Years, which completes my collection, and I bought a fantastic bowler hat (pictures to come, because I wore it on Saturday) It's been AGES since I went into Birmingham and I was sad to find a few of my favourite shops had closed down, but it was nice to have a change of scenery all the same.

Saturday was James's birthday, so Nic and I headed over to his house to join in with his cowboy-themed party. I don't have anything cowboy appropriate, so I found a way to wear my new bowler hat: 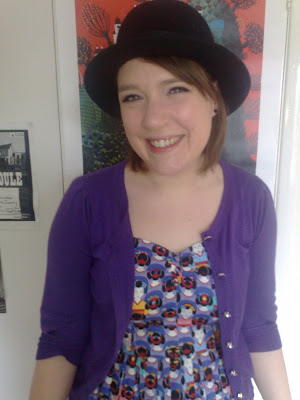 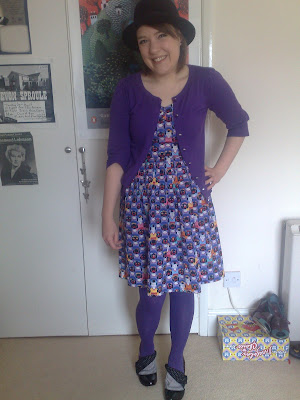 Nic did stick with the theme, and went as the sheriff: 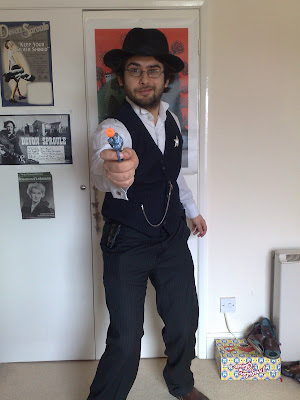 It was a good party. It was lovely to see both James and Mrs Z again, and to hang out with their baby girl, who has grown very big since the last time I saw her. I'm also heartily in favour of any event which requires you to drink champagne in the middle of the day.

Easter Sunday was highly enjoyable also. The sun briefly showed its face, so I thought I'd will it on by dressing for the summer in my Mauritius maxi dress: 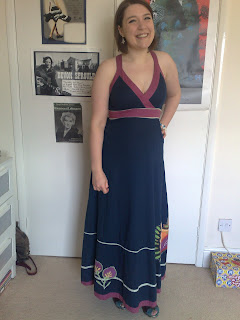 Nic and I bought some sandwiches from Corleone, and took them with us to Jephson Gardens. A rather tenacious squirrel was nosing around us, making it clear he wanted some of our food: 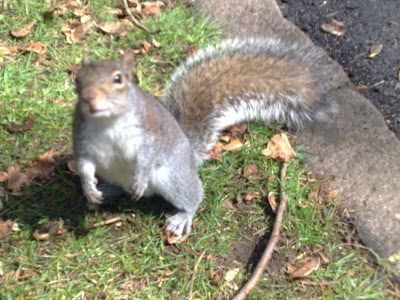 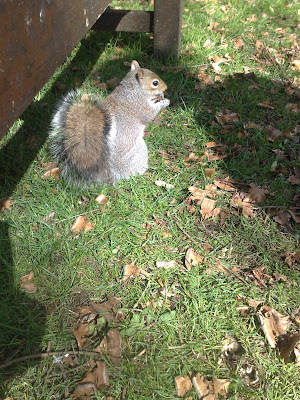 Nic didn't approve of this wee man's technique, but I thought he was pretty cute! After an ice-cream and a dander in the park and through the town Nic and I headed home. I had some ironing to do before we went out: we were going over to watch Doctor Who and have dinner with Tom. I was expecting to totally hate the new Doctor Who because the Russell T Davies/David Tennant Doctor irritated me so much it practically brought me out in hives. There were some things about this new Who that I disliked - I think the arrangement of the theme tune still sort of sucks, and I'm always going to find the 45 minute (or 65 minute, in this case) format annoying but I thought that Matt Smith was really good. I love his costume, and his acting does also remind me of Patrick Troughton. I'm reserving judgment on Amy Pond but so far she seems okay as a companion. I think she'll be pretty good, actually, because she'll be able to actually act with Matt Smith, rather than just react to a lot of gurning and shouting. All in all, I was pleasantly surprised. That said, Nic and I watched the first ever Doctor Who this morning, An Unearthly Child, and that really is incredible.

Yesterday I hung out with my lovely ladies Martha and Sugar Plum. We did a bit of shopping and a lot of gossiping, it was lovely. I bought some shoes from Bertie, which you'll be able to see below. I really am beginning to think that my feet are getting smaller because recently I am a lot closer to a 4 than to a 5. I tried on some lovely size 5 red shoes in the House of Fraser sale rail, but they were too big...but the shoes I bought are ever so lovely! I also bought two Inspector Morse box sets, only one more left to get now! That said, Nic and I do also have the first two seasons of Lewis to watch. I think the DVDs I have featuring Kevin Whately are starting to outnumber the ones I have featuring James Bolam. I am cool, no? In the evening we had a curry (home-made, and I think I probably ate as much lime pickle as curry) and watched Election, which we'd borrowed from Tom. I think it might be the only film I've ever seen Chris Klein in, and he was excellent, as were Matthew Broderick and Reese Witherspoon. It has a really disconnected, melancholy feel to it, which I liked a lot. I also really enjoyed all of the location stuff in Omaha, and I loved the way you got each character's interior monologue.

Spring really was in the air today, so I put on my new maxi dress and my new shoes: 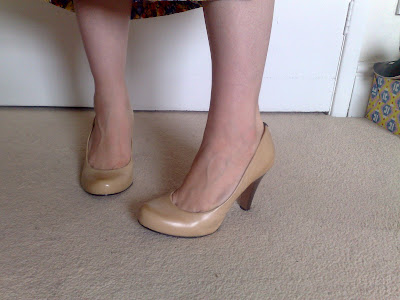 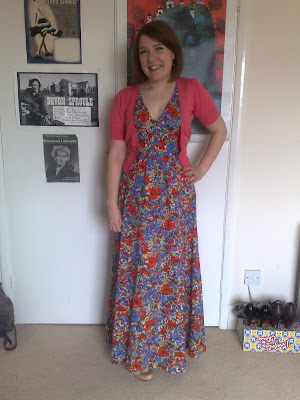 Fever Scribble maxi dress, cardigan from New Look
I really look like my mum in this photo!

Anyway, Nic and I had some very exciting birthday present shopping to do today. Before that (and before I got dressed) I had the exciting task of cleaning the bathroom. I know it probably sounds pretty sad, but I did gain great satisfaction from doing this, and am glad to have it done even if scrubbing the bathroom floor isn't the most glamorous use of a day off! The sun was shining and it was very beautiful in town and I've managed to find some excellent birthday presents for two very special people, so I'm extremely pleased with my day. I've got some nice things to look forward to tomorrow also - I'm getting my hair cut in the morning, spending the afternoon with Mrs Z and then leading the Sew Make Believe crochet workshop in the evening. It's back to work after that, I'm afraid, but it has been GOOD to have some time off.
Posted by Roisin Muldoon