The Revenge of Lady Muck

I've been in Northern Ireland for just over 24 hours now, and it's brilliant to be home. Nic and I were booked on a flight on Sunday, which was cancelled because of volcanic ash. It was looking like we might not get home at all, but luckily NI airspace opened in time for our rescheduled flight to fly, and I'm home at last in the bosom of my family. I'll blog about it in more detail later, for now I'm going to give you an appropriately Northern Irish book review.

I've been waiting to read Anne Dunlop's new novel The Revenge of Lady Muck since it came out in March. I don't know why I was funny about buying it online, but I didn't want to and couldn't find it in the shops in England. Anyway, today when my parents took Nic and I to Cookstown I thought I'd take a wee look, and I found it in the marvellous Sheehy's: 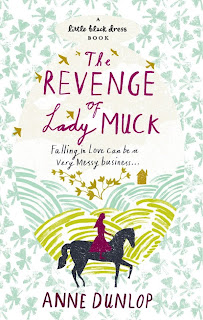 I was extremely excited about getting my hands on a copy of this because I have been waiting for years to find out what happens next in the lives of my some of my most loved fictional women, the Gordon sisters of Derryrose. I have read and reread Anne Dunlop's three other books about them, The Pineapple Tart, A Soft Touch and The Dolly Holiday and the last one ends on a bit of a cliffhanger. The girls are mentioned in some of her other books, but Helen Gordon in particular is a bit of a hero of mine, and I wanted to find out more.

The Revenge of Lady Muck has been published by the Little Black Dress press, an English publishing company. The previous three had been published by Irish publishing house Poolbeg and this move is reflected by a slightly different style. Dunlop is aware that her readers may not be familiar with the exploits of the Gordon girls and the book opens with a preface that sums up the previous three novels. This was pleasing in that phrasing from the novels is repeated here (I have reread them so many times I could recognise this!) and also because it was a nice way to become reaquainted with the story. I could immediately detect a change in the style of writing - it is less colloquial and a bit less conversational than her previous novels and this did take a bit of getting over.

This novel centres on Sarah Gordon, the second youngest of the Gordon girls. She's a primary school teacher, immaculately beautiful and ladylike and she has been single since she broke off her engagement to Ian Flemming, accountant and heir to a fitted bathroom empire. She broke it off after discovering that she'd 'unblocked sinks with more enjoyable poking and prodding' than having sex with her fiance. The novel follows her as her older sister Daisy is preparing for 'the wedding of the year' to Johnboy Jackson, and Sarah becomes involved with the aristocratic and handsome TV presenter Rupert Glass. The story romps along and is lots of fun, and I very much enjoyed getting to know Sarah after becoming so intimately acquianted with her sister Helen. It's a good Cinderella story and Dunlop very subtly emphasises the importance of knowing yourself before you can know what you want. Sarah's colleague Alexandra (Sandra) Jackson - The Rabbit, to readers of the previous novels, discovers this as well as she finds a way to stop feeling anxious about Sarah and to enjoy her marriage to Ian Flemming.

I read the novel in about two hours - starting it in the car on the way home from Cookstown and finishing it while everyone around me was watching TV. It's no exaggeration to say I didn't want to put it down. I was glad to find out a little of what happened to Helen, but it was Sarah's story and Helen was a fairly minor character. I can't fairly call this a complaint - my preference for Helen is mine alone, and for readers new to the saga this won't have presented a problem. However, I did miss her voice and her wit, and when another character dismisses her by saying that she chases after men because she doesn't have anything else special about her, I felt affronted on her behalf. I hope that if Anne Dunlop does decide to give the Gordons another outing, we get to hear from Helen again.

I'll read this book again. It may not become as treasured a member of my bookcase as Dunlop's other books, but it's definitely a keeper.
Posted by Roisin Muldoon