Not a look to be taken lightly, especially not at two in the morning on the streets of Derby. If the media is to be believed.

I always find the first sentence of the blog really difficult to write - I have written and deleted about five different sentences already. Maybe I should just plunge in and start with a pun or something, but I don't know if I would find that any easier. You'd think I'd have got the hang of this by now!

Anyway, here's what I've been up to. After writing my blog and finishing work on Friday, I had a very long and hot shower to make myself feel better. I put on the new frock that I bought before going to Paris (but which I deemed to short to wear with flat shoes and therefore didn't take with me) and headed out to meet Sugar Plum and Martha for a coffee: Ruby Belle sailboat dress from Lilac Rose. See how short it is! Still, I suppose I should give these things a go while I'm still young enough to wear short skirts and high heels.

I don't love it - I'm not totally sold on the colour, but it's fun and I think it'll look cute with pink tights in the autumn. Anyway - it was nice and sunny on Friday evening so it was nice to put on a new frock and see my best girls. We ended up staying in the cafe until it closed and then having to continue our conversation in Tesco. It was really good to see the ladies, even if my coffee was pretty bad. I should have known it wouldn't be good when the lad making it had to consult the manual, even though it was just a white coffee. At any rate I think we were too busy talking and catching up for me to drink the coffee, which is just as well!

Nic reasoned that watching a Fred Astaire film would be a good way to make me feel a bit cheerier and he was right. We had singapore vermicelli and watched Shall We Dance and my blues were turned rosy pink by bedtime. Well, not quite but it certainly did help!

After a very sleepy Saturday morning browsing the library sale, the charity shops and catching the sun in Jephson Gardens, Nic and I watched about eleventy million (three) episodes of Star Trek: The Next Generation while I worked on the gift I'm making for a colleague. I had sort of half planned to do some sewing, but I really want to get this other thing finished so my plans will have to wait. It's always nice to make something for someone else, isn't it, boys and girls? Yes, it is! Saturday evening was excellent - along with Martha, Nic and I had a drink in Wilde's before having dinner with Sugar Plum and N in their house. Nic and N escaped to the Somerville for last orders to give us time to talk and it was lovely, if a little bit rambunctious. I won't bang on again about how excellent my friends are, but they are and I honestly don't know how I would get through the tough times without them.

It turned into an unexpectedly late night, and Nic was feeling a wee bit delicate on Sunday morning, but not delicate enough to stop us from going to London. Ages ago Nic had booked us tickets to see Stacey Kent, who was playing a gig in the Open Air Theatre in Regent's Park. Of course going to this was dependent on how good the weather was, but as it was bright and fine on Saturday we'd decided to go. Nic booked us a hotel on lastminute - a four star hotel near Regent's Park! We headed down to London, checked into our hotel and bought a picnic to take with us to the park. We met up with our friend JP and his girlfriend H, and had a picnic in the Rose Garden. It was a lovely lazy way to spend a Sunday afternoon, and although H had to leave before the gig started JP was able to come with us.

I don't really know Stacey Kent's music at all, but Nic likes her a lot and the gig was excellent. Her phrasing is quite a lot like Blossom Dearie's and as well as some of my favourite standards (The Surrey with the Fringe on Top and Tea for Two are two good examples) she sang lots of material that had been written for her. What made the gig so special was the setting, however. The music was beautiful, and it was very moving to experience it as the evening was getting darker and the wind was moving through the trees. We all headed back to our hotel room after the gig to hang out with JP for a bit, which was lots of fun. Also, Nic was able to have a drink from the mini-bar for the first time ever! The hotel was lovely and we got quite an unbelievable bargain, really - so much so that going to gigs in London is something that we'll hopefully do more often.

This morning we had an amazing breakfast on Marylebone high street (grilled halloumi, scrambled eggs, roasted tomatoes and toast) before having a wee look in the shops. I avoided temptation this time and didn't even go into the Cath Kidston shop, and we caught the last of the sunshine in Regent's Park before catching the train back up to Leamington. It was such a lovely thing to do, and was a bit of a tonic after feeling so low all week. I didn't take any photos, but I got another wear out of my lovely new vintage dress and I saw LOTS of herons!

All in all I am feeling much better than I did on Friday. It has been difficult to get a sense of perspective because, between one thing and another, I have felt totally besieged. It sounds very obvious to say that talking it out with my loved ones (and on here too) has really helped. So has looking at pretty things, like this bag I have my eye on from Joules: 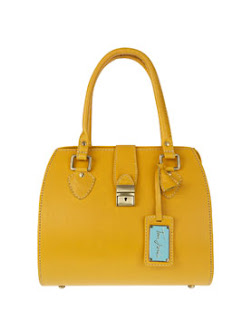 It's pretty expensive so I might have to save up for it. Or, more likely, I won't buy it at all but will occasionally go into the shop to stroke it lovingly until it is no longer available to buy. Either option is pretty good, really.

Right, I'm off. On the cards for this evening is Saturday's episode of Doctor Who, home made pizzas and rice pudding. You'll get a more coherent blog from me tomorrow, I'm sure. Maybe.
Posted by Roisin Muldoon