I'll fetch you a punch up the bracket, mush!

Hey you guys! There's been a bit of an unplanned break in transmission round here lately, I suppose some of you might have been thinking that I had slipped through a crack in the earth or something like that. But, you know, I'm still here - it's just been a tough week and I had no blogging mojo at all. I won't go into the specifics, and I'm still not feeling great but I think I can see how it's going to get better, and that's a good thing.

Anyway - despite some of the doom and gloom there have been some really excellent things about this past week and, you know, it's nice to think about them! Last Saturday (7th August) Nic and I headed over to Birmingham with Sugar Plum and Martha to do a bit of shopping and hang out with our friend Becky. Becky is off to America in a week or so to study, so it was good to have the chance to spend some time with her before she went. We had lunch in a vegetarian cafe in Digbeth before having a look in the vintage shops in the area. I don't often have much luck with vintage, it has to be said, but I was wearing one of my very favourite vintage dresses, and I think that gave me a bit of good luck: In COW I found a lovely vintage dress made of a drapey flowy fabric that's possibly polyester. Anyway, it looked mediocre on the hanger but was beautiful on, so I bought it. In the Custard Factory's Saturday Flea Market I also stumbled across a pair of second hand Kurt Geiger shoes. Not vintage, but they had never been worn, and were only £10 and in my size: Shoes number 30: KG Charlie shoes
This is good for Ruby Shoesdays because earlier in the week I had given one of my pairs of red shoes to the charity shop - so this helps to keep me in the game!

While Nic took himself off to buy some comics, we ladies had a look in Fancy Silk Stores. Both Sugar Plum and I had specific projects in mind, and got what we were after, and Becky found some amazing printed cotton with a fig print on it. We had a very jolly day, but I had rather forgotten just how exhausting I always find Birmingham. Nic and I just curled up on the sofa and dozed the rest of the evening away.

I had a very difficult day on Tuesday, but was cheered up immensely in the evening by a visit from Sugar Plum and N. Sugar Plum came bearing shoes - she was sale shopping in the Aspire sale and, knowing I had my beady eye on these, bought them on my behalf: Shoes number 31: Irregular Choice Oz shoes
Now, these may well be the most impractical shoes I own because of the raffia uppers. I haven't yet worn them because the weather has been too dismal, but I'm sure I'll find a way to wear them soon. They're really high, even for me, but I just love the engraved perspex heel. I suppose perspex heels normally suggest stripper shoes, but I don't think that's really the case here!

On Wednesday Nic and I went to see Toy Story 3, which I loved. We saw it in 2D because I wasn't sure I could get on with having to put 3D glasses on over my proper glasses, but I loved the film so much that now I would like to go and see it in 3D. I was feeling a wee bit emotional anyway, but I was really moved by the film as well as being hugely amused by it. I can't remember the last time that I went to the cinema and felt completely transported by the film. In the evening I went along to the Sew Make Believe social, which was excellent as always.

On Thursday I wore the vintage dress I bought in Birmingham the previous weekend: I'm afraid the photo doesn't really do the dress justice - the skirt is a lovely full skirt and the waist is nipped in at just the right place. I wore it with a skinny patent belt from Marks and Spencers and felt a bit like Betty Draper. I wore this round to Tom's house, he was cooking us dinner and we hoped to be able to see the meteor shower from his balcony. It was too cloudy to see anything (probably just as well, having read Day of the Triffids I was a little bit suspicious of this meteor shower!) but we had a really good evening just chatting and spending time together.

I passed Friday and Saturday very quietly, getting my head down to some sewing. At the start of the month, I bought some Colette patterns from Sewbox, so I decided this weekend was the time to try one out. I had bought this pattern, which is called Ceylon: 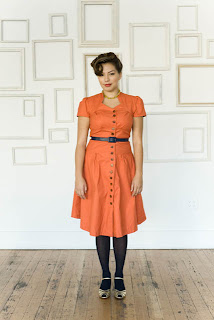 I was totally seduced by the shape of this dress. Also, the autodidact in me thought it would be a good learning opportunity as I'd have to learn how to make buttonholes and attach sleeves. I was very excited when the pattern arrived, because the pattern booklet is so pretty, and the instructions seemed really clear. The pattern was labelled 'intermediate' which is probably fair enough, but the instructions are so good that I sailed through this one relatively easily. It took me a bit of time to figure out how to insert the sleeves, and it took me slightly longer to figure out just how the bloody hell to get the automatic buttonhole bit of my sewing machine to work. This was frustrating actually because once I got it working it was really easy but the instructions that came with my machine missed a bit out, so I was only able to figure out where I was going wrong by looking it up on Google. I made fabric covered buttons for this, which was a bit time consuming because there are 16 of them. However, I'm really glad I did because I love how it looks. I'll definitely make this dress again, I quite fancy making it in red with black buttons. It was a fairly intensive two days of sewing to get it done, but I have learned loads from it and I am so pleased with how professional it looks (even if I do say so myself!) I will make the bodice slightly smaller, I think, but that's about the only change I'd make the next time. I've lent Lysy the pattern and will be interested to see her take on it. My next sewing project will be another Colette pattern, this time the Roobois dress.

Today has been very relaxing as well. The sun came out, which was especially welcome after yesterday's monsoon-like downpour. Nic and I had lunch with Tom and our friend Dave, who was visiting for the weekend, before having drinks with Lauren, Lysy and The Scientist. I don't quite know how I've managed to exhaust myself this much, but I'm sure you can tell that my concentration is wavering. I think it's time for a cup of tea and a Basil Rathbone Sherlock before bed. Goodnight all!
Posted by Roisin Muldoon