And watch out for your fillers - your breads, your rolls, your chips, your dips. You've only got so much room - don't be a hero.

Evening all, and happy clocks-changing-now-it's-British-Summer time! Actually, I find the clock change always a bit wearing because it messes up my body clock, but today has been warm and sunny and if I'm a bit tired, no matter because it is finally officially no longer winter. I mean, there's no guarantee that there won't still be snow but still.

So anyway my dears, I hope you've all been having a good week. All is well enough with me. Work continued to be very busy all week and I was looking forward to my home working day on Friday being a day where I could catch up with myself and do all the little jobs that had been building up all week (writing up meeting notes, reading, booking things, that kind of job) but I ended up getting so stressed by work that I burst into tears. It's stupid, because it was nothing big or important, just that I kept being interrupted and pointlessly at that. Mind you, I think the tears broke the storm clouds that had been gathering above my head all morning and cleared my head for the afternoon. I was greatly helped along in this by Nic soothing me and feeding me his delicious home made carrot and coriander soup. As the sun was still shining I packed up a bit early and went out to meet some friends for coffee and a gossip, and it was wonderful. I wore a dress lent to me by Denise:

Emily and Fin Lulu dress, Fever Hetty jacket and Bertie Sardinia shoes
So, I love this dress. It is so much fun to wear, and I adore the print. I'm currently scouring the internets for one I can afford. Oh, also, I got this sweet little jacket for £5 on ebay! I'm all about the ebay bargains as you know, but this one is especially good because it's warm enough for the spring, but light enough to not be too warm. Also: polka dots! Of course, I didn't wear the jacket all day, here's what was underneath:

Any excuse to wear this little bolero...
I'm going to call this one for the Shoe Challenge as well. It's really easy to wear these shoes, because they go with everything and are surprisingly comfortable. I love the way they make my legs look really long! 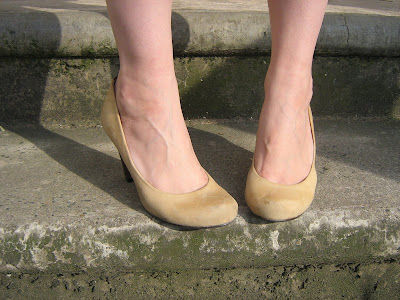 Bertie Sardinia shoes
After a stressful morning it was so nice to hang out with friends in the afternoon, and Sugar Plum and Lysy invited me to join them at the Sewing for Pleasure fair at the NEC the following day, so I had something excellent to look forward to the following day. Every inch the classy lady, I ended the evening in bed with a gin and tonic, Nic, and an episode of New Tricks, all the storms and tears totally forgotten.

I was up bright and early to meet the girls at the station in the morning, and feeling quite excited about going to the Sewing for Pleasure fair. It has to be something good to induce me to catch the horrrible cross country train on a non-work day (it's the train I catch to work, and it's like travelling in a really fast-moving toilet) so the bar was set quite high for the fair. It was a fun day, not least because it was really good to hang out with my wonderful girls, and to check out lots of sewing stuff. I was generally unimpressed by the fabric on offer - there was lots of lovely stuff, to be sure, but nothing at a good enough price to warrant having to stand in a long queue and be elbowed around by middle-aged ladies for. Still, I bought some Vogue patterns at a knock-down price, was inspired by lots of the things I saw and had a really good time. I haven't taken photos of the patterns I bought, but you'll see them at some point no doubt. I did get to meet someone pretty cool:

Don't be fooled by my smile here. He really was pretty scary, and really tall!
This isn't one of the patterns I bought, but I did take a photo of it for Lysy. She's been wanting a Sexy Taxi Driver costume for a while now, so I wondered if maybe she'd rather be a Sexy Something Else: 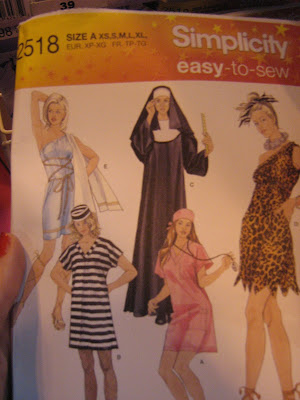 Sexy Grecian, Sexy Nun, Sexy Cavewoman, Sexy Surgeon, Sexy Convict
We got back to Leamington early enough to do a bit more shopping (I bought some buttons, but that was it) and then the girls headed off while I dandered into town with Nic. We had a look in some of the shops and stopped for a coffee in Exclusive Roots Cafe on Park Street. Nic had hot chocolate and I had coffee with chocolate and banana cake. I just wanted to mention it, because for one thing the cake was immense. It was awesome. Also, the cafe is part of a charity and all profits go to that charity. Seriously though, the cake. It's good!

On Saturday evening Nic and I settled down to watch a film. I'm not always in the mood for concentrating on a film, but over the past few weeks I've been really enjoying watching films and discussing them with Nic. I really enjoyed Vertigo last week, and as I've been wanting to watch Don't Look Now for ages that's what we watched. It helps, of course, that I have a huge crush on 70s Donald Sutherland: 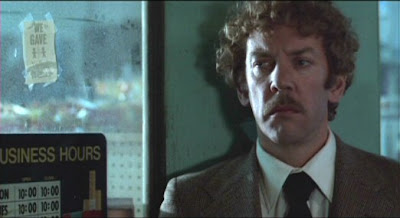 Donald Sutherland: Yes please
I knew all of the pop-culture references to Don't Look Now, and had seen clips of the famous sex scene between Donald Sutherland and Julie Christie, but knew very little about the film itself. In many ways I think it's a good film to have watched so soon after Vertigo because they have a lot in common. I found Don't Look Now to be surprisingly moving - I was really surprised by the extent to which I was touched by that sex scene. It was tender and beautiful and it brought me to tears. I've so often seen Don't Look Now referred to as a horror film but I didn't view it in that way myself. It was almost unbearably tense and the sense of building to an unavoidable climax was very strong. Like with Vertigo, I look forward to watching it again to see how knowing what the ending is changes my experience of the story. Also, seriously, I adore Donald Sutherland so never need an excuse to watch a film with him in it!

Today I've been a bit drowsy due to the clock change, but I've had a pretty sweet Sunday. I slept late, Nic and I breakfasted on scrambled eggs on toast and then took a walk into town to do some grocery shopping before I headed off for an afternoon of sewing, cake and chatting with Denise and Lauren. I'm still working away on my gingham dress (progress made, though!) and Denise and Lauren had their own projects on the go. It's such a nice, companionable way to spend a Sunday afternoon and I really enjoyed myself. We ended up with a little dressing up session, and both Denise and I went straight home and bought ourselves nice fluffy petticoats from ebay after trying on one of Lauren's most recent buys. It was great. I had to get changed shortly before going out, having discovered that my dress had toothpaste on it, but I think my second-choice outfit worked out well:

Fever Pansy spot dress, red bow belt from a charity shop and Topshop shoes
Nic bought me this bow belt yesterday when I spotted it in a charity shop. It was very cheap, and it looks it, but I think it's fun all the same.

My lovely Nic is working hard to get our dinner ready (chilli men stir fry and noodles: yum) so I'd best wrap this up. I think this week is going to be horribly busy at work, so I don't know that I'm going to be around much, but I'll see you all before too long no doubt. Look after yourselves, yeah? And each other, as Jerry Springer used to say.
Posted by Roisin Muldoon