When I sat down to write this blog post I was in a really crabby mood. I'm sleep-deprived and under the weather and feeling crabby about various things anyway, but in the time it's taken me to get my photos sorted out the metaphorical sun has come back out. So, instead of crabbing at y'all about everything that's annoying me at the moment I'm going to share what I've been up to over the past few days. I think that's a bit better, although I can't promise I won't crab a bit! Ignore me if I do though, because I have no call to. Nic and I are watching New Tricks and he has just cooked me the most amazing smelling veggie chilli for dinner.

Anyways, what I have been up to! Well, I had Thursday and Friday as annual leave because it was Nic's birthday and we had lots of fun things planned, starting with a trip to London on Thursday to visit the Doctor Who Experience at Kensington Olympia. Nic had been waiting since before Christmas for this, so he was very excited indeed when we set off on Thursday morning. 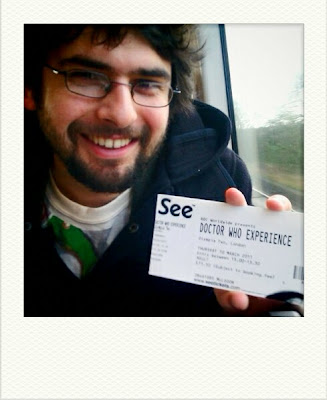 Nic on the train with his ticket
It took us a little bit of time to work out how to get to the venue (confusing signage on the platform at Earl's Court!) but we arrived in good time to eat a picnic before immersing ourselves in the experience. I don't want to spoil the experience part of it for any of my readers who might want to go, but it was very exciting and enjoyable to be in a Doctor Who adventure! The best part was undoubtedly walking through the doors of the TARDIS to discover that it is actually bigger on the inside! Photography was prohibited during the experience bit, but once we got into the exhibition photography was encouraged, so Nic and I both took lots: 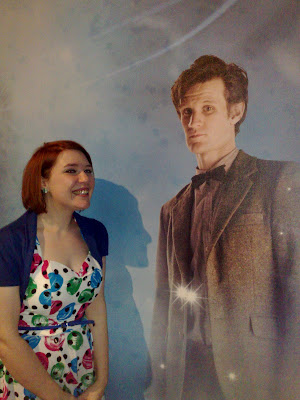 Meeting the 11th Doctor. Sort of. Although after the experience, it did sort of feel like we had met! 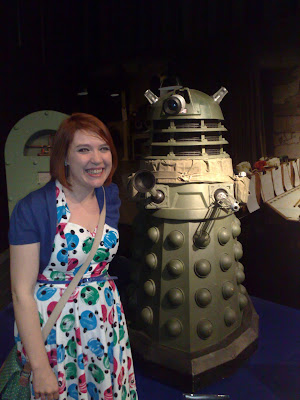 One of the WW2 Daleks. It's armed, but this was Box File Dalek, so I wasn't too scared 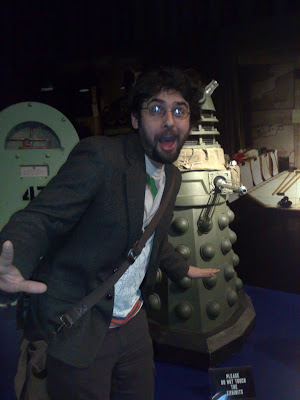 ... but Nic clearly isn't as brave as me 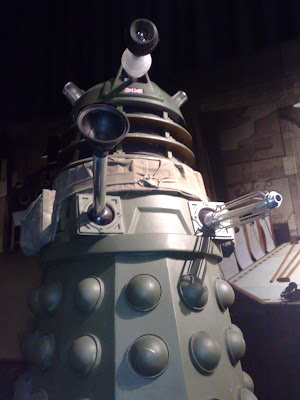 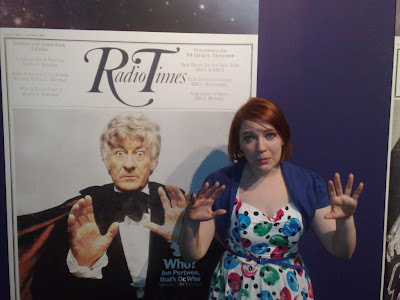 Here I am with my favourite Doctor, Jon Pertwee 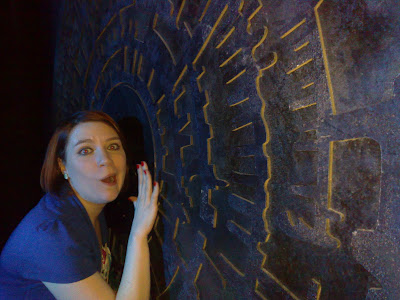 The opening of the Pandorica 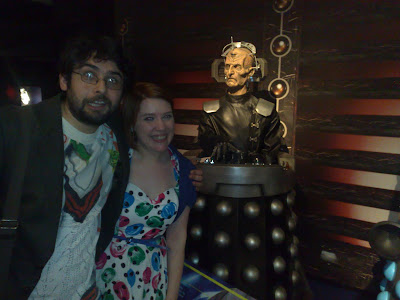 I love this photo of Nic and I meeting Davros
The exhibition was really cool. There was a good mixture of artefacts from both new and classic Doctor Who, including lots of original props and models (like the rather enormous Robot from Robot and some of the Daleks from Remembrance of the Daleks) and there were some really fun interactive things to do, like recording your voice to sound like a Dalek and learning to walk like a Cyberman. They also had the orginial TARDIS console from Peter Davison's years as the Doctor and you could get inside the ugly-ass TARDIS of David Tennant's Doctor: 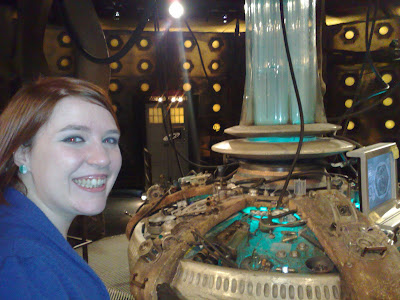 I'm no Billie Piper, and I'm pretty happy with that. David Tennant is the SUCKIEST Doctor. 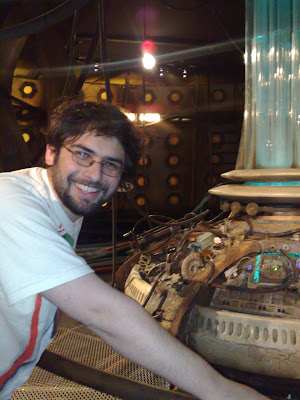 THIS is much better 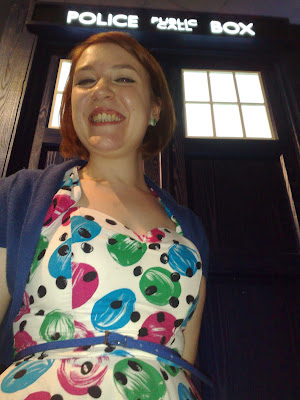 Outside the TARDIS
One of the best interactive bits was being able to get inside a Dalek and control it. It was awesome: 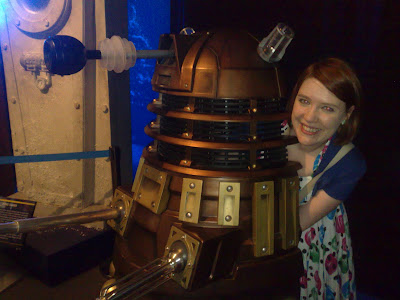 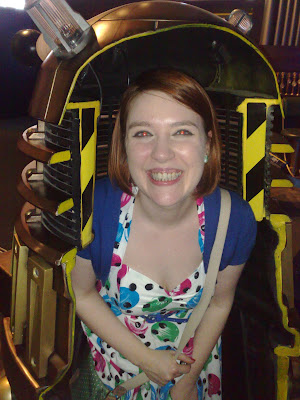 Me inside a Dalek
Of course, we stopped in the gift shop on our way out for some souvenirs and encountered a couple of scary characters 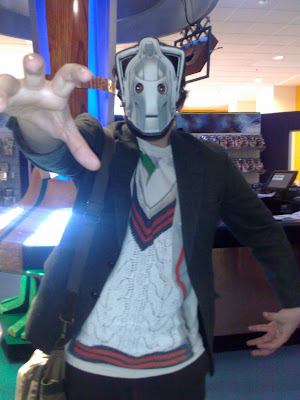 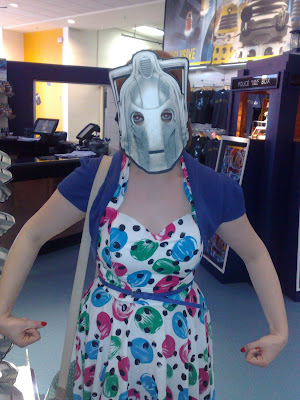 Yikes!
Post-experience, we hopped on a number 9 bus to Green Park and stopped in a pub for a coffee and to talk over the experience, before going for a bit of a wander round some of our favourite London haunts. I wanted to go to the Fever shop, and Nic had a comics IOU burning a hole in his pocket, so off we wandered to Soho to sort that out. Nic got some comics, and as for me... 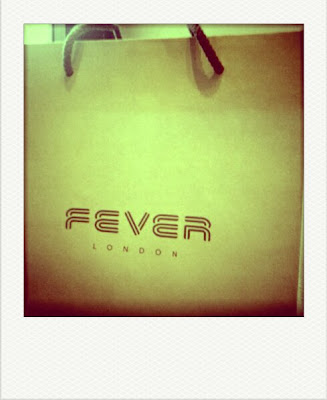 Tease! I'll post pictures when I wear it, but it was obvious I was going to buy something!
After some noodles and a browse around the bookshops and comic shops on Charing Cross road, Nic and I took our tired selves home for an early night. We're definitely country mice at heart, although a day out in the big city is always enjoyable.

We spent a fairly lazy Friday, just pottering around and getting the house ready for visitors later that evening. We wandered down to South Leam to visit a new secondhand bookshop on Clemens Street. It's called Garrett Books, and it's fabulous. Nic and I both came away happy (he with some comics, and me with one of the Worst Witch books by Jill Murphy) Ever since Portland Books closed about five years ago, Leamington has been crying out for a secondhand bookshop. I don't like shopping in either Oxfam Books (Zoe: "I only buy books from Oxfam when I'm desperate") and I have to be really desperate for reading matter before I'll spend my money in Waterstone's, so I am very happy that somewhere interesting and independent has finally opened up. If you're local to Leamington, I can highly recommend it!

One lazy afternoon later, Nic and I welcomed lots of friends to our flat for his birthday party. It's been ages since we had a party (and ages since I've been to a party, I'm getting anti social in my old age) and we had so much fun. Nic was thoroughly spoiled. Every single person who came to the party was awesome, and three of these amazing people came bearing cakes they had baked for Nic! Lysy, Denise and Becky have set us up cake-wise for the next few days, at any rate. We were also able to celebrate lovely Lauren's birthday with her, another cause for joy: 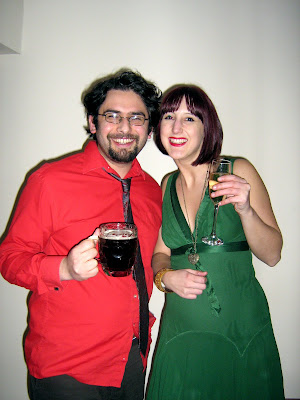 The birthday pair, Nic and Lauren
I'm always excited for an opportunity to get dressed up, so I seized the chance to wear one of the dresses the good folk from Fever sent my way last month:

Fever Tonga halter dress and Vivienne Westwood for Melissa Lady Dragon cherry shoes
Isn't this a beauty?! Obviously it's still far too cold to wear this out of doors, but I'm looking forward to sunning myself in this in the warmer weather. I especially like the print:

I had been feeling a little bit nervous about the party, in the way that I do before any social gathering, but I needn't have. We had lots of fun, and there was even some dancing, which was amazing given the tininess of our flat! As always it was good to spend time with loved ones, and I'm so grateful to everyone who came for making the evening so much fun.

It is no exaggeration to say that I was a bit the worse for wear on Saturday so from Friday onwards I have no craic! I spent most of Saturday asleep and Sunday wasn't too much better, so it is my great shame to say that I didn't get out into the lovely sunshine we had this weekend. I did manage to save a pair of boots, though, as part of the Shoe Challenge on Sunday:

Tulip dress from Topshop, Fever Fez bolero and red cowboy boots from Office
I can honestly never decide what I think of these boots. They're super comfortable, and I was so happy to find them about three years ago. I'd set my heart on a pair after watching Wonder Boys so couldn't believe it when I actually found a pair. I've worn them loads since then as they're pretty much my only pair of flats (not counting sandals) but yet I feel strangely ambivalent towards them. It might just be that I feel strange in flats, because I do think they look pretty good with this outfit.

Anyway, that's your lot for this evening and with none of the threatened crabbing! Maybe tomorrow night, I am storing some up. But for tonight, I'm taking my tired self to bed with a book and a cup of tea, and I'll catch you all later. Night all x
Posted by Roisin Muldoon