I’ll do what I can to help y’all. But, the game’s out there, and it’s play or get played. That simple.

Evening all! I hope you're all well and that some of you even managed to get a spot of sunshine this weekend, did you? I did, which did wonders for my mood and my general outlook as well, although I am under no illusions about the sunshine because it is still freakin' cold. I discovered just how cold when I had to stand outside for an hour on Friday morning watching the Shred-It man shred some (lots) of test papers. I lost feeling in my toes and it took about 3 cups of tea to warm me up once I got inside (and, later, some cherry sponge and custard to temper the bad mood getting cold had put me in) So, you know, it's still winter and blahDEblah etc.

It is all good round here, though. After a very late night last night (of which, more later) I have that lovely feeling of having expected to have a horrible hangover, but being spared that hangover. It feels like a reprieve, so the world seems even sweeter as a result! This weekend has been pretty ace. On Friday night I relaxed away the busy week with some pink champagne and a DVD with Nic, which was just wonderful, and just exactly what I had needed after such a busy week in the office. On Saturday morning we were up bright and early to get some chores done, and then to catch the bus to Rugby to spend the day with Zoe. Having mentioned to her a while ago that I'd like to visit Rugby, she got in touch earlier in the week to invite us over. Nic and I chose to take the bus rather than the train because we could take a direct bus, and it takes a long scenic route through some really pretty countryside and little villages. I'm quite the geek, as regular readers will know, and I really like taking the bus to somewhere I haven't been before. The sun peeped its head out from behind the clouds around about Southam, but sadly by the time we got to Rugby it had clouded over and it was very cold. I was very taken with Rugby despite the cold. It has a pretty town centre, and seems to have a good mixture of independent shops and lots of charity shops. Nic and I got off the bus on the Clifton Road and straightaway bought something from the Sue Ryder shop - I bought a pretty Midwinter casserole dish and Nic found a first edition of Octopussy by Ian Fleming! It was 20p and isn't in superb condition, but it is in reasonably good condition so we'll take it along to Charing Cross road later in the week to see how much it's worth. It's not going to make us our fortune, but it is definitely worth considerably more than 20p! I really enjoyed browsing through the charity shops with Zoe and we each found something, I think my favourite find was a set of ballpoint sewing machine needles for 50p. All three of us are vegetarian, so Zoe took us to one of her favourite Rugby restaurants, Summersault, which is a vegetarian restaurant. 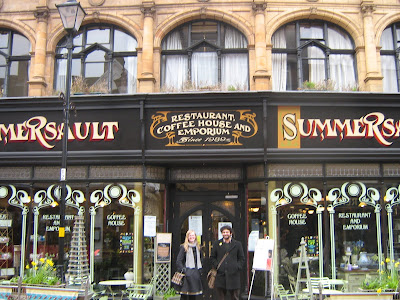 Nic and Zoe outside Summersault
Summersault is in a beautiful old building that looks like it was once an apothecary. It's really beautifully laid out, and the food was delicious - it's definitely made my list of 'must-visit' places in Rugby 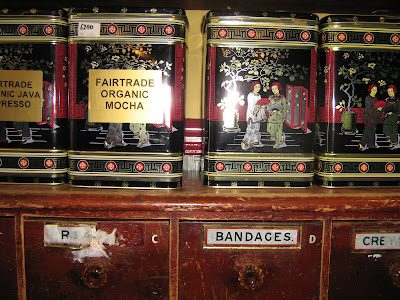 Inside Summersault
Despite the considerable temptation offered in both Vanilla and the Vanilla sale shop, I was reasonably restrained and only bought one item - a red Fever bolero cardigan, which I was very happy with! All shopped out, we wandered back along to Zoe's house, where she treated us to fresh coffee and delicious home made chocolate muffins before we caught the bus back to Leamington.

We caught up with a few things around the house before heading out again for the evening. Nic is assisting Michael Lightborne with some teaching on Sherlock Holmes over the next few weeks, and Michael and Denise invited us round to their house for the evening so Nic and Michael could do some preparation for the teaching and I could help Denise with drinking her birthday cava. We were throughly spoiled because not only did Denise cook us dinner, but there were two different desserts on offer. For dinner we had a meal cooked from a recipe that Denise found on the marvelous Meemalee's website. It's a Burmese dish, and you can get the details from Denise's blog, and it was amazing. Tofu, noodles, coconut, lime, chilli oil and an egg - doesn't sound too much when I put it like that, but I went back for second helpings and it was only some sense of decorum (and the prospect of two desserts) that prevented me from going back for thirds. In short: YUM 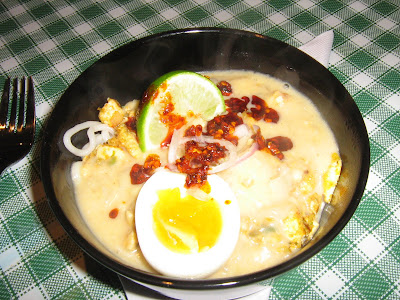 Here it is. Now to see if I can recreate this at home!

After dinner the boys got down to some work, and Denise and I got down to some Mario Kart on the Nintendo Wii. I've never played it on the Wii before (although I am a veteran of both the N64 and GameCube versions) so it took me a while to get used to steering with an actual steering wheel, and it didn't exactly help that we were pretty well in our cups by this stage. Still, though, it was a LOT of fun and makes me wish I could afford a Wii myself. Maybe one day! It was well after 3 before we got home, and well after 4 before Nic and I finally went to sleep so this morning was a very late start. As I said earlier, though, I am mercifully hangover-free considering the amount of cava Denise and I managed to put away between us. It's just as well, because we have visitors this evening and as such, had to give the flat a good clean. Cleaning the toilet is not the most pleasant of jobs at the best of times, so I'm very glad I wasn't doing it hungover. As it turns out, our visitors won't be arriving until bedtime and leaving early in the morning so the frantic cleaning earlier seems a bit pointless. Well, not pointless but I suppose at this point in the evening I'm tired and a little bit cranky that I didn't spend that extra hour in my pyjamas, instead. Ah well.

So, this afternoon post-cleaning Nic and I did a bit of grocery shopping before going to listen to some jazz in a local pub. The jazz gig was great and the sunshine inspired me to wear one of my lovely Vivien of Holloway dresses:

Vivien of Holloway Jelly Beans halterneck dress, Fever Fez bolero, blue belt from Accessorize and Irregular Choice Little Miss Oh shoes
This dress just feels like Spring, and I was delighted to find tights that were an exact colour match for the bolero. Naturally enough the circle skirt made me want to swish around a bit, so that's what I did:

And, while I have worn them a few times already I thought I'd count today as a Shoe Challenge and save these sandals: 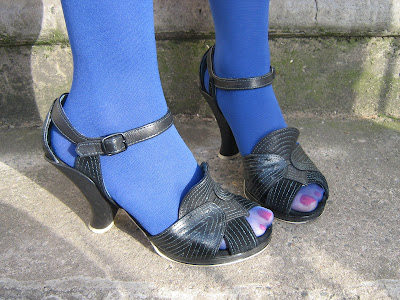 Irregular Choice Little Miss Oh sandals
I've worn them a few times already since I got them last week, but wanted to save the challenge until I could wear them with blue tights, to match the blue stitching! Geeky, I know. These look like they're very uncomfortable because of the curved heel, but actually they're very comfortable and sturdy and are grand for running about and even dancing in. I did a wee bit of dancing at the Jazz gig we went to, which was excellent fun. 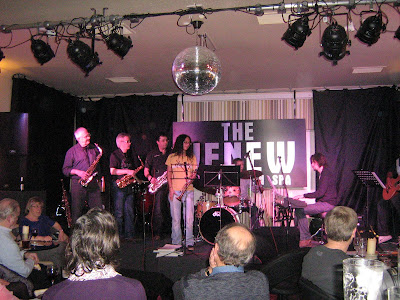 Jazz at the VeNew (STUPID NAME) in Leamington

I've got a three-day week this week, which is ace. Nic and I are off to London on Thursday for his birthday treat, and then we're having a birthday party here on Friday night which I'm really looking forward to - any excuse to get really dressed up! I'm hoping for a relaxed start to the week as well, because next weekend will be busy, so maybe I'll chill out in the evenings with a few of my ongoing craft projects. I have a letter or two to write as well, having received another letter from my dear Victoria Deloria on Saturday morning. I love writing letters and receiving them too, there is something so special about communicating with someone in this way. I think you can get to know someone in a unique way when you write to them. If you don't already read Vic's blog, you should, by the way, it's awesome.

One of the things Vic said in her letter really made me think. It was about friendships and their significance during difficult times and how important it is to choose your friends wisely. By that I don't necessarily mean the more obvious distinction between good people and not-so-good people, but rather what the relationship brings to your world. Over the past year I've gone back to the drawing board in some ways in my attitudes towards people and relationships and it's only recently I've been able to see how important it is to cherish the friendships that are undramatic, the ones that emphasise the positive rather than relentlessly brooding on the negative. I've been that friend who broods on the negative, and I've had those friends too and it's something I've been making a conscious effort not to do. It's astounding the difference that can make, and the difference it can make to step back from all the drama and focus on other things.

Anyhow, it's Sunday night. Our guests will be here... when they're here, I guess, so I'm not waiting dinner. I'm off to eat some veggie enchiladas and I'll catch you all again later in the week.
Posted by Roisin Muldoon