Like many Doctor Who fans, I was saddened to hear about the death of Elisabeth Sladen - Sarah Jane Smith - at the age of 63, on Monday. I've come to Doctor Who reasonably late in life, I have the vaguest of memories of watching it as a child (when Sylvester McCoy was the man in the big blue box) but falling in love with a geek can do funny things to a girl: now I'm a pretty serious Doctor Who fan. 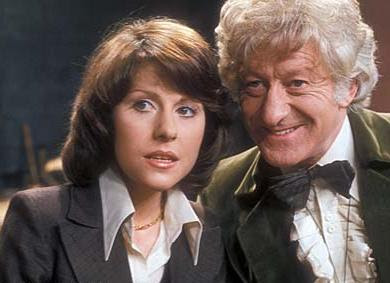 Sarah Jane Smith and the Third Doctor, Jon Pertwee
No doubt about it, Sarah Jane Smith was a really cool companion. She was the companion through some of Doctor Who's best serials. The first serial I watched featuring Sarah Jane was the incredible Genesis of the Daleks. She and UNIT Doctor Harry Sullivan (Ian Marter) aided the Fourth Doctor, Tom Baker, to answer the question - if I had a chance to kill Davros and therefore stop the birth of the Daleks, would I do it? This serial is absolutely awesome for loads of reasons - Davros among them, and the various iterations of the Daleks - but Sarah Jane does stand out. It's not true to say that she's fearless. Sarah Jane does her fair share of screaming, but rather that she is brave and determined. When she gets left outside the Kaled dome, with the mutated Muto slaves, Sarah Jane plans and leads an escape. I remember thinking how cool she was, and that if this is what Doctor Who was about, I was in. To be fair, I also thought that Harry was pretty nifty, even after he got his foot stuck in one of the early versions of the Daleks - a giant, mutated clam. 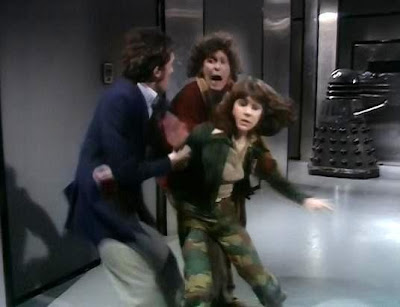 Sarah Jane, The Doctor and Harry in Genesis of the Daleks. That's a Mark Four Travel Machine following them, there.
Sarah Jane continued to blow my mind in Pyramids of Mars, another Fourth Doctor serial. This serial is excellent because it has a classic Doctor Who villain, Sutekh the Destroyer. It's really funny too, and not just because Tom Baker has googly eyes. Sarah Jane is pretty bad-ass in Pyramids of Mars, there's no bother to her at all as she takes the ring thing and controls the robots (okay, if you haven't seen it that will make no sense but trust me, it's cool.)

Sarah Jane was independent. She was a journalist who ended up in the TARDIS because she was off in search of a story, and she stayed because of her sense of adventure (not, as the Russell T Davies version of events seems to run, because she was in love with the Doctor.) There can be no doubt about it, she was brave. She talked of feminism in her first adventure, The Time Warrior, and she got stuck in and fought a Sontaran as well 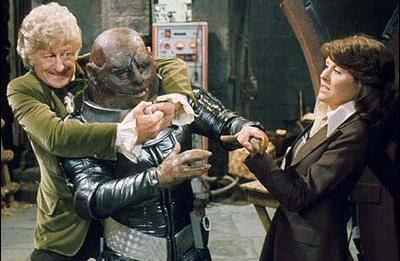 Sarah Jane and The Doctor giving Linx what for in The Time Warrior
She put her ego to one side and did what needed to be done to save the crew in The Ark in Space by crawling through a horrible ventilation shaft. Credit to her, she wasn't even all that freaked out by the Wirrn, at least not as much as I would have been. 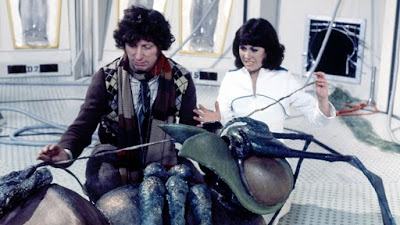 Sarah Jane, the Doctor and one of the horrible Wirrn creatures in The Ark in Space
Sarah Jane did her fair share of screaming and falling over and needing to be rescued. In The Sontaran Experiment she might not like Harry calling her 'old thing' (fair enough) but she does need his help, and a little joke is made out of it in The Five Doctors. Scooped up into the Death Zone, she falls down the mildest incline on a grassy slope, and needs the Doctor and Bessie to tow her out. I don't say any of this to detract from Sarah Jane in any way, she was excellent.

What I do find really tiresome is how, in almost every obituary I have read of Elisabeth Sladen, the old lie that Sarah Jane was the first independent female companion in the show's history is trotted out. Dan Martin at The Guardian is guilty of this, saying:

Her character was introduced in 1973 alongside Jon Pertwee's Doctor as a feminist antidote to the traditional "Who girl" who asks dumb questions and screams a lot. Sladen ran with the role and helped pioneer a new genre of female hero in British drama – the feisty yet vulnerable female.

Both of these had me doing an Alan Partridge and shouting at my laptop "Stop getting Who wrong!" Sarah Jane was an independent minded companion, but she was NOT the first. The Doctor's first companion, Barbara Wright, was every bit as independent as Sarah Jane. Single? Yes. Educated? Yes - Barbara was a teacher. Independent? She follows Susan back to Totter's Lane to figure out what is going on with her and her mysterious grandfather, and she brings Ian as backup. She stands up the The Doctor in The Edge of Destruction and it is her lecture that forces the grumpy old man to start treating Ian and Barbara with some respect, which leads to a real friendship. She is a passionate advocate of human rights, and tries to use her power for good in The Aztecs. Even in 1963, Doctor Who had independent female companions. 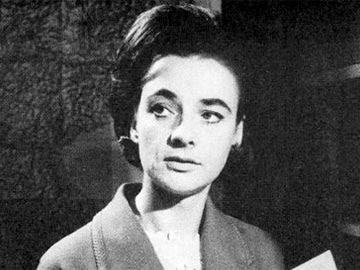 Barbara Wright
In fact, I think it's much more fair to say that Sarah Jane Smith was part of a tradition of strong, female role models in the show. This idea that Doctor Who companions just screamed and got into trouble a lot is just wrong. Sure, there were a few duff ones (Dodo) but on the whole, the women who followed The Doctor into the TARDIS were smart, curious and fiesty. Even Susan had her moments (although she did scream, quite a lot) In The Dalek Invasion of Earth she is brave in her participation in the rebellion led by Barbara. 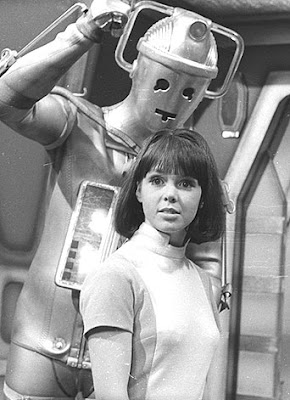 Zoe Heriot - totally unafraid of Cybermen
Zoe, companion to The Second Doctor, is a scientist with a photographic memory, and she was instrumental in helping the Doctor and others survive in The War Games. 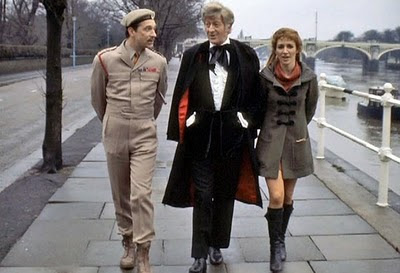 Liz Shaw with the Third Doctor and the Brigadier
And what about Cambridge-educated Doctor Elizabeth Shaw? I have to say, Liz is my favourite of the Doctor's companions. She does not need to be rescued. She's a doctor too, with degrees in a number of disciplines. She wears short skirts, but don't let this fool you - she is whip smart and ready to tell the Doctor when he is wrong. Barry Letts felt that the show wasn't ready for someone quite as independent as Liz and when he wrote her out (also partly because Caroline John was pregnant and unable to commit to the show's filming schedules) it was because Liz was ready to return to Cambridge and lead her own life - she didn't want to be a companion on someone else's adventures, and felt that the Doctor just needed someone to pass him his test tubes and tell him how clever he was. 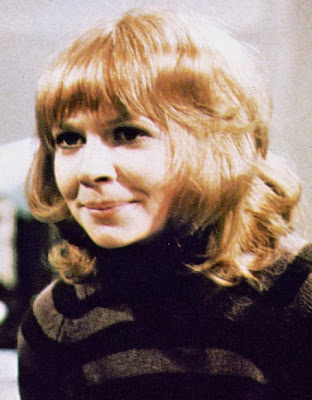 Jo Grant
Sadly, this is how lots of people seem to remember Jo Grant. But let me tell you, Jo Grant would kick YOUR ass if she needed to. She might have failed her O Level Chemistry, but she faces off against the Master. She's hypnotised by him once, but only once. In Planet of the Daleks, when she thinks the Doctor is dying, she bravely makes her way through the jungles to seek help. She finds it, too. She is pretty and looks like a little doll, but there's steel in Jo. She stands up for what she believes in, and isn't afraid to get her hands dirty. When she leaves, she leaves the Doctor bereft. But she doesn't just leave for a bit of man candy in the shape of Clifford Jones - no, she leaves because she's ready to go off and have her own adventures with Cliff, searching for alternative food sources in the Amazon rainforest.

That brings us to Sarah Jane. Not the first, but a worthy addition to a tradition of intelligent, cool and brave female companions. Nor was Sarah Jane the last - most notably Tegan Jovanka and Ace follow the path walked by the women who came before them.