... and, after an internet search, declined to comment further on the matter of his or anyone else's severed head.

Hola everybody! I know it's been ages, would you all believe me if I told you that it's just I've been super busy? I have been! Sadly with nothing hugely glamorous, but very busy all the same. Anyway, it's a lazy sunny Saturday afternoon and here I am. Settle down, I suppose, and I'll get y'all caught up. Well, you know what I mean.

So, the last time I wrote was before the long weekend. I was slammed at work - more totally boring stuff, but the bank holiday weekend totally made up for it. I had a busy working from home day on the Friday, followed up by an impromptu trip to the pub that evening to celebrate a dear friend getting an awesome new job. I got ridiculously dressed up and wanted to show off my new haircut and ended up having a fabulous night, finished off with chips. Can't ask for better than that, right? Nic and I dragged our hungover selves out of bed the next morning to go to Banbury -for no real reason other than we fancied a change of scenery. It was a sunny, windy day and we had a potter around the charity shops before lunch. We ran into one of my colleagues who recommended a bar to us for lunch - stupidly we ate elsewhere because when we dropped into the bar a bit later for coffee we realised how awesome it was. The Pinto Lounge is really cute and friendly and does the best ever Knickerbocker Glory. Look: 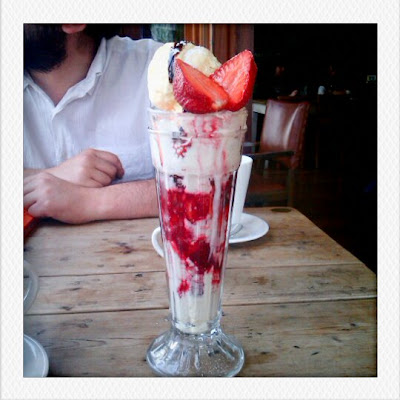 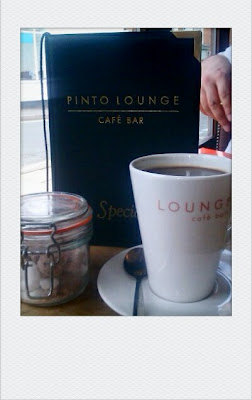 It was accompanied with some lovely coffee....
Banbury is a nice place to spend a lazy afternoon. It has an excellent independent bookshop that also sells second hand books, so we had a nice little haul to look at while swooning over our dessert 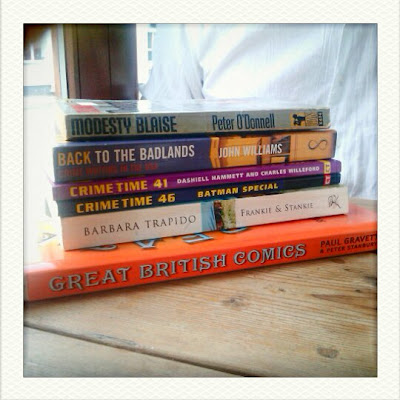 It was a windy day so I dug some opaque tights out of the winter clothes I packed away somewhat optimistically in March, and paired them with a beautiful Emily and Fin dress I'd borrowed from Denise:

Okay so obviously this photo wasn't taken in Banbury, but when we got back. Leamington station was looking particularly pretty as the newly renovated waiting rooms had had their grand opening the previous day, with a tea party on the platform. I love the sign, and Leamington's art deco station is one of the town's most interesting buildings (in my opinion, anyway) Nic and I took a turn in the park before returning home for an early night and a very lazy Sunday morning. I was lucky enough to also have the Tuesday off work so, after spending the day sewing on Monday I had a project to bring with me to Denise's house on Tuesday, where we had a little sewing circle with Lauren. The sun had finally come back out, so I dug out one of the dresses that are just too short to wear to work, so don't get worn quite as much:

It was back to work on Wednesday, and on both Wednesday and Thursday I was slammed - it was so busy. However, the sun had come out and after the long weekend I was feeling very relaxed and happy. I wandered into TK Maxx on my way home from work on Wednesday and emerged £36 poorer but with two very pretty new Fever dresses - WIN. On Thursday, Nic joined me in Coventry after work. We had curry at the Spon Gate, a rather nice Wetherspoon's in the city centre, before going to the Nursery Tavern for an evening of drinking and giggling with the wonderful Louise, her husband, her mum and her absolutely hilarious two doggies. It was so much fun, and really good to be able to sit outside in a pub garden and enjoy the gorgeous weather. It also felt a little bit naughty to be getting drunk on a school night, but luckily for me Friday is my working from home day, so I was able to nurse my gentle hangover with many cups of coffee in my pyjamas the next morning. Four cups of coffee and many episodes of Dawson's Creek later (Season 2, now with 150% more douchebaggery!) I was ready to get dressed and face the world. I met Nic in the park sporting one of my TK Maxx impulse bought frocks:

Fever Neapolitan dress (in Spearmint, apparently) Joules bag and yellow wedges from Next
I was genuinely delighted to spot this in my size in TK Maxx, having eyed it up in the Fever store. For £16.99 I had to buy both colourways (well, I didn't have to) so you'll see the other one at some point. I love the hip pockets (because you know I love pockets) but they do mean that this dress is slightly less flattering from the side. I don't care though, because how about those colours?!

Nic had the lovely idea of having dinner in the park, so we had a tapas-style dinner of spanish omelette, olives, bread and cheese by the pond in Jepshon Gardens. I totally failed to take any photos, I was too busy scoffing the delicious treats. You'll have to imagine the food!

Today I met up with Denise, Lauren and Charlotte to go to Judy's Affordable Vintage Fair in the Assembly. I had so much fun, and it was a really good opportunity to take my latest sewing project out for a trial run. Having made a Colette Patterns Ceylon dress last year, I knew I loved the pattern and wanted to make it again. I guess all my Rooibos dresses got in the way, because it's taken me until last week to get around to it. Sugar Plum spotted some navy cotton with anchors on it in a local haberdashery shop a while back, and I had to have it. Zoe's polka dot Ceylon inspired me to put the fabric with the pattern, and try my hand at piping for the first time.

Anchor print Ceylon dress and Irregular Choice Mermaid shoes
I'm ridiculously pleased with this dress. I cut it a size smaller than my green one, and accidentally cut the back midriff band a size smaller again - whoops! It worked out fine though, because I decreased the seam allowance slightly and it resulted in a perfect fit around my waist. This was by accident rather than design, to be honest, but who cares? It fits!

Fabric detail - you can tell I'm having an anchors moment
I'm really tickled with how well my piping worked out. I only had enough red bias binding to pipe the top of the midriff but on reflection, I think piping both the top and the bottom might have been too much anyway. And with the polka dot on polka dot action with the buttons on the fabric, I didn't want to overbalance things. You can't quite see it in the photo, here, but I did my topstitching and buttonholes in red thread to pick out the anchors. I still had some headaches with the buttonhole foot, but I do think I've got the hang of it now, finally.

Another totally gratuitous shot, featuring the sunglasses I bought at the vintage fair, and the handbag I picked up at the fair in the Pump Rooms a few weeks back.

To up the twee factor that bit more, I've added some blue ric rack to the hem inside the dress. Sure, why not? 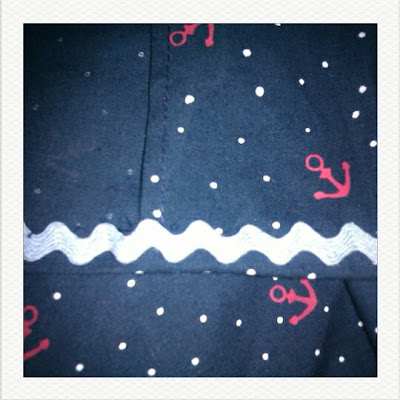 The vintage fair was very good fun. The Assembly is an awesome venue, and there were lots of stalls to rummage though. I didn't find any clothes that rocked my world, but each of us came away with something and the atmosphere was excellent. Lauren and I explored the backstage area and found a Dalek hidden away: 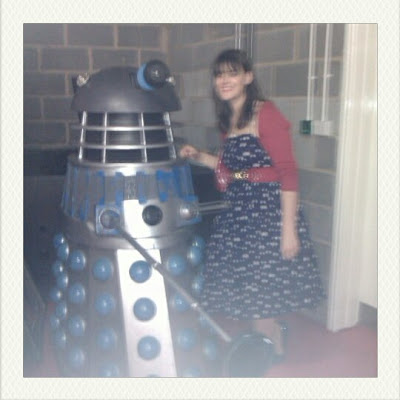 All shopped out, we stopped at the tea rooms for a pot of tea and to take in the beautiful outfits everyone around us was wearing 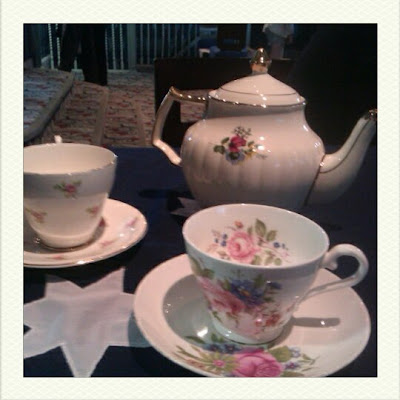 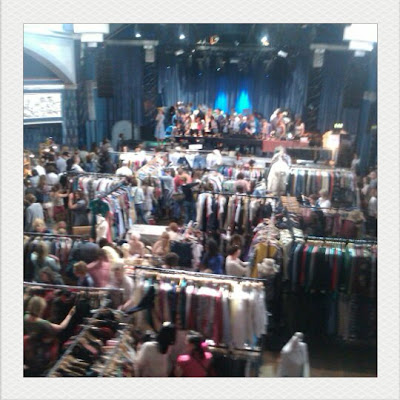 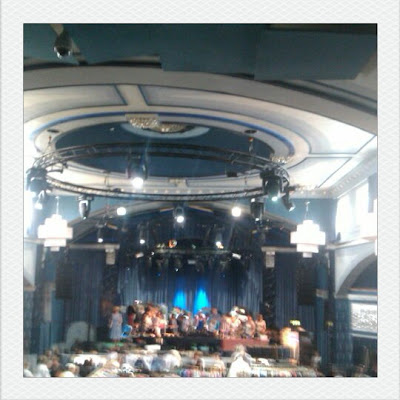 Some slightly blurry photos of the lovely venue
A turn around town after the fair saw me buying some adorable red enamel anchor shaped earrings, and some cookies for Nic before coming home. And there's still lots of the weekend to come! Right now, however, I feel like getting back out into the sunshine. Before I go, though, you should hop over to About Your Dress as Ria and Nommer very kindly invited me to join them on their writing team. That's just a wee bit more Roisin for your money, there. #WIN
Posted by Roisin Muldoon