God, Ben, I'm such an eejit, I put the shorts on my head!

Evening all! Yes, another midweek blog post. It must be the season of the witch! I hope you've all been having a good day and, now that Wednesday is over, that you're looking forward to the weekend. I'm grand, although today has been a difficult day. It certainly brightened up once I got off the train in Leamington and it was sunny, and I was greeted on the doorstep by this little lady: 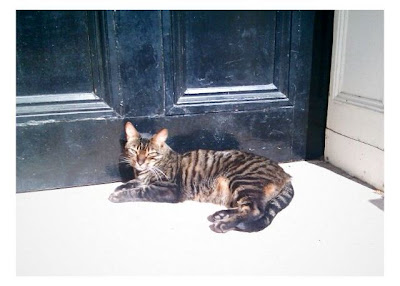 So, what's the craic?

She's not my cat. In fact, I'm not sure who she belongs to but she's often to be found trying to gain access to our building. A friend who lives around the corner reports that she does the same there, too. I don't think she's a stray because she's in good condition and is very well socialised - such a friendly little kitteh! I sat down on the step and she curled up in my lap, purring away like a good'un. Sadly I don't think she'd enjoy soya milk or vegetarian food, so we didn't invite her upstairs. Still, there's a lot to be said for getting a cuddle from a little purry thing to make your day seem less crap.

Actually, today wasn't that bad. I am exaggerating a little bit. There were lots of good things about it. I got to see my friend C again as she's back from holiday. I had a meeting with some excellent people. I wore new shoes!

Sail Away Ceylon dress, made by me and Irregular Choice Patty shoes

These shoes are black, so they don't actually match the dress but I don't care. I like how they look together. Despite the reservations I expressed yesterday, I really enjoyed wearing these shoes, and the more I look at them the more I'm able to see the flag as a nice graphic. The shoes are a wee bit big, even with insoles but I'm going to wear them anyway and make sure to walk slowly in them!

This was the second time I've worn my Sail Away Ceylon since I made it a few weeks ago, and it held up well through a whole day at work - buttons staying closed and everything! It's convinced me that I need to do another make of this frock, in red with shiny black buttons and black piping. Incidentally, those shoes would go well with that if I ever do get around to making it.

Still, even with the amusement of new shoes and a pretty dress I did not get on well with today. It's partly because I'm still feeling a bit under the weather. Recently, though, I've been really up and down. It's like the emotional equivalent of the weather. You know how at the moment it's all dark clouds and wind one minute, and beautiful blue skies and sunshine the next? I'm just like that. I've been all over the place today, emotionally speaking, veering from feeling so frustrated it makes me physically nauseated to feeling like I could hug a colleague because she brought me a cup of coffee. It's a bit tiring, to be honest. I'm trying not to read too much into it, and I'm also trying hard to breathe deeply and count to ten on all of those occasions when I want to scream (or to type) "would you just PISS OFF, PLEASE!" at the people around me.

The next few months are going to be like this, though. Nic is working so hard to finish his thesis as well as working on other projects too. You all know how much my job is sucking at the moment. Figuring out money stuff and making plans for the future are in there too. There's a lot going on. In some ways, I work well under pressure. You know, I can meet deadlines and I like a challenge. Where I start to crack up is when I feel claustrophobic, and that's how I'm feeling now. In crowds I get stressed out when I have to hold my elbows really close to my body. It sounds silly but it makes me feel trapped. I feel like I'm being forced into things I don't want to do, and being directed down roads I no longer want to travel. It's emotional, and probably a bit of an overstatement, but I am stressed out. I'll get over it, and later this evening no doubt I'll be feeling more mellow. However, like I said, I think the next few months might be a bit bumpy.

Anyway, enough bellyaching. Wednesday is over, and that means The Apprentice later this evening, a wee bit of sewing and a wee bit of reading. I might even be able to scare up enough alcomahol in the cupboards to make myself a Wednesday cocktail. Things could be a lot worse. I'll be more cheerful in the next one, honest. Have a lovely evening, don't be hypnotised by Jedi Jim, and I'll catch you all later.
Posted by Roisin Muldoon