Well my friends and neighbours, what's the craic? Not too much here, it's a chilly and rainy Sunday afternoon and Nic is drawing and I'm just pottering around, Sunday style. I've got the ingredients ready for a cake to be baked, and scones and clotted cream and lemon curd (and jam for Nic) to have with a pot of tea and an episode of Poirot later. I hear it's what all the kids are into these days.

Anyways, I hope you've all been having a good week. It's been all go in Clackett towers as Nic is working very hard. I've had a really boring week at work - it's been busy, but it seems that all I've been doing is going to meetings, writing the meetings up, going to more meetings, writing them up. Not even a spreadsheet to break it up! (although I did get around to making that spreadsheet of all of my dresses) Things were enlivened a bit the other day though. When I came into work the other morning one of my colleagues told me to go and have a look in the kitchen. Our office has a canteen, but there are two little kitchen areas on each floor for making tea and coffee, with fridges for keeping your lunch in and seating. They're really pleasant, and part of the facilities contract is to provide tea and coffee and milk and cordial. I don't drink any of what's on offer because I'm a fussy beggar (I don't drink instant coffee, I don't drink sugar free cordial, I don't enjoy their cheap-ass tea bags) but this certainly did make me laugh: 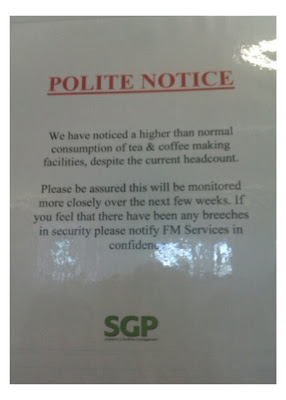 I always enjoy anything that is headed 'Polite Notice' because it will almost certainly be followed up by something passive aggressive and pissy. The reference to 'headcount' is because almost 60 people have been made redundant since March, as the organisation I work for is closing down. Still, though. Taped up next to it was this riposte: 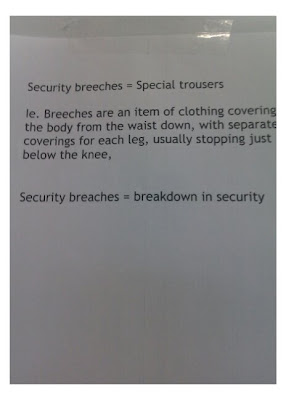 I like to imagine the people from FM services hiding behind the plants with a clipboard monitoring tea bags and possibly microchipping them, all the while wearing specialised security breeches. Later that day, both notices were taken down and replaced by a reworded one that removed references to trousers of any kind and instead urged us to approach FM services in confidence if we saw any suspicious behaviour. I don't know if the man with the bag marked 'swag' counts as suspicious, however. These posters caused a heightened level of hilarity in our team, I think because work is so shit for everyone at the moment that the only thing keeping us right is laughing at everything. It is a little bit manic, if I'm honest, but it does make going into work that good bit less stressful than it would be otherwise.

Other than that, this week has been fairly uneventful. Boredom was getting on top of me somewhat, so I did start to compose a blog post in my notebook about all the things that piss me off. I'm feeling mellower now, but I'll give you a condensed version and perhaps add to this list the next time a vicious mood strikes me. Does that sound like a deal?

Two annoying women I see every day on my way to work:
I did actually write loads about these two that I can't be bothered to reproduce here, basically one of them is that rude woman who pushes along the edge of the platform when the train is pulling into the station, endangering other travellers and just generally pissing me off. The other one is possibly my own fault, but it's a woman who glares at me every single morning when I walk past her. I say it's possibly my own fault because I've seen her around Leamington a few times before and without my glasses on she looks rather a lot like someone who I'd usually walk into traffic to avoid having to talk to so she's probably seen me peering at her to figure out who she is. Or maybe not, and maybe she just doesn't like the look of me and that's fine. But still, having a complete stranger look you up and down and tut when you're just trying to make your way to work is pretty annoying, isn't it? Bloody sourpuss.


The mis-use and abuse of the words 'no' and 'one'
By this I mean specifically people who write 'noone' instead of 'no one' or 'nobody'. I swear it makes a vein in the side of my head start to throb when I see it. It bugs me even more than the incorrect use of the apostrophe. Okay, maybe not - but you get where I am going with this! 'Noone' is not a word, at least not in that context. It is the surname of the fine actress Kathleen Noone, who played Aunt Bette in the fabulous Sunset Beach (she was also in Knots Landing and All My Children. What a woman) 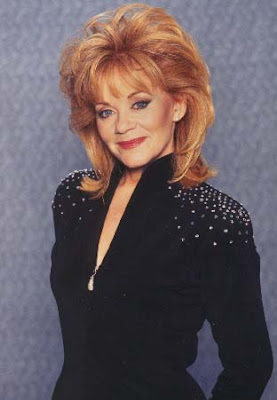 Kathleen Noone. It's fine to use Noone in this context.
Listen up. If I see you writing 'noone' when you mean 'no one', I will think that you are stupid, and I'll like you less as a result. It's harsh, I know, but you shouldn't be writing for public consumption if you don't know that this is incorrect, or are too freaking lazy to proof read your work before publication. Learn to spell, and use real words. Just for reference, I feel the same way about 'alot' when you mean 'a lot'.

Trying to format a document in Microsoft Word
One of the quickest ways to send me dipshit.

Being interrupted in conversation
Someone talking across you is annoying, isn't it? That's not just me, right? What about when the person doing it doesn't even know what they're talking about? Does that make you want to go on a rampage? It makes me want to go on a rampage. I have encountered a lot of this recently. Another irritating variant is when the person you're talking to asks you a question, and then interrupts you when you're answering to finish your sentence for you. This makes me want to punch people in the face. Wait until the other person has finished talking before you make your point, especially if you've just pulled that point out of your ass.

That was as far as I got with my list of negativity but I invite you, readers, to share your peeves and vent your spleens in the comments if you feel like it.

Moving on, then... on Thursday night Nic and I went out for dinner with Lysy and The Scientist to Sushi Ya on Holly Walk. Having had a bad experience the only other time we'd been (good food, bad company) we'd both been reluctant to go again. This time the food was good, the company was excellent but the service was really bad. Live and learn, eh? A few glasses of wine there and later on in the Somerville made the evening despite having had to wait over an hour for three pieces of courgette in tempura. Oooh, look who's still a bit grumpy!!

Friday afternoon I went out to see my friend L and talk sewing, and I spent most of yesterday sewing while Nic worked. We did get out into the sunshine for a walk in the park, however - I'm even more glad of that given the filthy weather today! I've been wanting to have an outfit photo taken in the bandstand of the Pump Room Gardens for ages, and finally got my chance yesterday:

Simplicity 2591 made from Joel Dewberry fabric, red shoes from Topshop and plastic necklace and cuff from my Aspire goody bag

I actually made this dress a few months ago, but yesterday was the first time I wore it. I was pleased with the make but unsure about the fabric, which was a gift. It's a quilting cotton and although the drape is good, I wasn't sure I liked the colour. Lauren suggested wearing it with red, and as the sun had come out I thought I'd give it a go. I think it photographs well and it's comfortable to wear so I reckon it's a keeper.

One more. Why not?


Today the weather is grim so I've been curled up for most of it with a cup of tea and the hilarious Sweet Valley High book that came for me in a parcel from my darling Victoria Deloria. Nic and I did pop out to get some groceries and have a mooch in the shops (£6.99 for a second-hand copy of Freedom by Jonathan Franzen, Oxfam? Are you taking the piss?) so I opted for tights and a cardigan to keep dry, although it's not actually that cold:


I'll be back in the week but until then, you can check out my other offerings from around the web. I've been a busy little bee this week after all...

Some shoes I want over at About Your Dress

Some sewing tips for Vintage lovers over at Retro Chick

And a photo from yesterday in the park, just because: 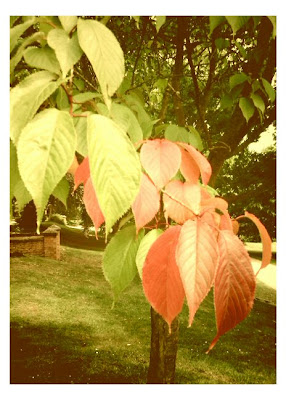