You knows I loves the bumper cars.

You guys, it's been a busy week. I hope you're all keeping well! I've been very busy at work getting stuff ready for an event at the end of next week and it feels like I've spent most of this week crawling around on the floor of the secure room putting things into bags. I mean, proportionally speaking that's not how I spent most of the week. It sure did feel that way, though. So, you know, that's how things are at work. Yeah.

It's been another funny few days. I haven't been sleeping well and I've been feeling anxious again. I think I have come a long way since last year in terms of being able to pinpoint what it is that's making me feel anxious so that I can address it. It doesn't make everything immediately better, is the only thing. Then, I suppose you can't really expect that. I could really do without the symptoms though - on Wednesday night I hardly slept at all and my hands were tingling, and I have that horrible palpitation feeling of having butterflies in the throat. I know what's causing it, the same thing as last time. It can be difficult to break free of the things that are hurtful - even harder when there are others trying to hold on to them. The big difference now is that I know I'll be okay. I haven't always known that, but I'm stronger now, and more able to say no. I'm better at knowing how I feel, and what my boundaries are. I'll be okay.

One of the reasons why these incidents of anxiety have been relatively isolated is that I'm better at directing my energies into the positive things. To that end I went to see my friend L on Tuesday evening to drop off a dress I'd made for her. A while back she very kindly donated a few pairs of adorable shoes to me, so I offered to make her a dress in return. She bought the fabric and picked out the pattern, and last weekend I sewed the dress up. She chose the Parfait pattern by Colette patterns and some pretty Moda cotton. I was really nervous about making a dress for someone else, but it fit her perfectly and she loved it - no photos to share with you, I'm afraid! It was a good experience, because sewing for someone else made me slow down and properly take my time over the details. Also I didn't have that thing I get when I'm sewing for myself, which is impatience to wear the garment! It helped me get back into my sewing groove - but a bit more of that later.

On Wednesday I wore a new frock I'd bought in the River Island sale, after having been inspired by Amber. This photo was taken after a looooooooooong day in the office, so it doesn't really do the dress justice, but it's very pretty indeed. It was the first thing I've ever bought from River Island, and it was a steal at £15 in the sale.

I know. You can really tell I've had a long day. I'll get a better photo on a better day. It's a lovely light summery dress so I can see myself getting a lot of wear out of this. What more could you ask for?!

Thursday was a bit of a blur because I was so tired. I don't know how these people who deliberately pull all-nighters work, because I was in no form at all for anything. I had a short burst of energy when I got home and popped into Decorative Cloth to buy some fabric, and after a nap I was feeling more presentable, which was good. Thursday was swelteringly hot, and I was really glad to be wearing something light and comfortable:

Who looks tired here?! Yeah. Like I said, I haven't been sleeping well. This dress is pretty cute though, and an impulse ebay bargain buy. It comes down into a nice V at the back as well - not too low that my bra strap shows, which is a bonus.

I was working from home on Friday, which was a good and restful end to the week. The fair has come to town, and after we were finished for the day, Nic took me out for a spin on the waltzers. I love the waltzers!

I'm looking a lot more lively in that photo though, aren't I?! This dress was a ridiculous bargain, costing the princely sum of 99p on ebay. 99p. It's perfect for a day at home as it's comfy jersey, and I love the bright pink colour. I'll tell you, though, it was not the most suitable dress to be wearing to the fairground. We got extra special attention on the waltzers and it's because the damn skirt kept riding up. I had to keep a firm grip on the hemline, or the Ray Von alike who was spinning our car around (a lot) would have seen more than I was willing to show. Seriously. At one point there were two of them spinning us around. Still, we got an extra long go, so it wasn't all bad. I love fairgrounds, the cheaper and tackier the better, so I love it when the fair comes to town, and I'm looking forward to more turns on the rides over the next week or so. 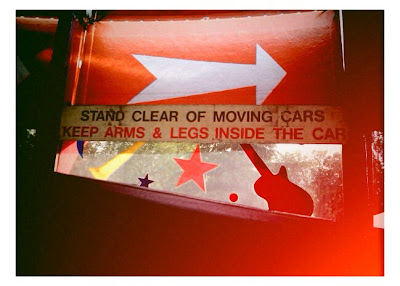 The louder you scream, the faster the ride! Fun is the key, but keep seated at all times, or you may die. SHABBA! 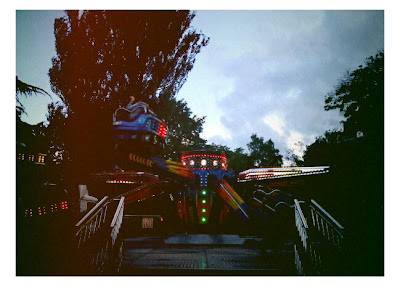 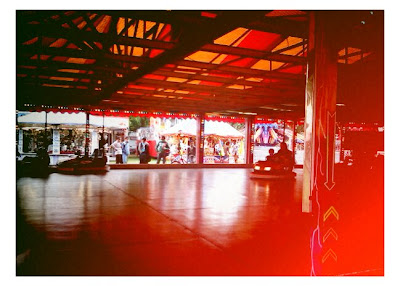 You knows I loves the bumper cars I'll be down again later in the week to test out some of the other rides, and to put my pennies in the penny drop machines. I'm dead common at heart, me. Luckily Nic quite enjoys the fair as well, so it was a really nice treat at the end of a long week for both of us:

Nic on the waltzers

Nic bought me some candyfloss as a special treat:

This may be my favourite ever photo of myself. Look at the size of that candyfloss! I'm going to be back down for some more tomorrow.

Today has been a fairly quiet one, starting with a really good lie in and a browse around a vintage fair in town. I put the fabric I bought on Thursday to good use and, having been inspired by how much I loved the dress I'd made for L, made one for myself:

As you all know, I love Colette patterns but for ages I'd been a bit on the fence about the Parfait. I don't know why, maybe the pockets. I impulse bought the pattern after seeing Debi's purple corduroy version and sewed up my own version in some nasty purple cotton I hurriedly bought at Hobbycraft. Yuck. So I still wasn't all that convinced until I saw this version at Sew Something Vintage. The version I made for L was too cute, so in my spare time yesterday I whipped up one for myself. It really was quick as well, I made this in a few hours and in terms of finish, it's the best dress I've made yet. It fits really well, too.

The buttons came from Decorative Cloth as well, and they're purely ornamental. The dress zips at the side so I thought I'd save myself the hassle of buttons, and it's no problem without them. I know the buttons are as twee as you like, but I think it kind of works. This makes a really nice sun dress, and I will make an autumn appropriate one as well. As with the other Colette patterns I've sewed from, the instructions are amazingly clear and precise and some of the techniques are just so clever! The gathering at the bust is hidden by the midriff facing, a detail which makes the inside of the dress look really well finished. I love it! This afternoon I picked up some pretty blue polka dot cotton for my next sewing project, which I hope to get done this week - more to come!

Anyway, that's me for this evening. Nic and I are about to make dinner and settle in with a film. Behave yourselves, and I'll see you all soon.
Posted by Roisin Muldoon