Whenever I'm about to do something, I think, "Would an idiot do that?" And if they would, I do not do that thing.

Afternoon (or evening, or whatever) everyone. It's Monday afternoon and I am pretty psyched that today is over, because Monday is usually the work day that I dread the most. Not just because it's Monday, but because it usually sucks for other reasons. Today was good, though. I didn't spend it bored out of my mind, which is an automatic bonus! I won't talk too much about work though, but I am cautiously hopeful that the next few weeks are going to be more interesting and useful than I'm used to. So that's good because last week I was so bored I wanted to chew off my own arm. It's nice to see some improvement on that score.

Things did pick up towards the end of last week, though. On Friday afternoon I went out for a spot of shop-browsing, coffee drinking and fabric shopping with Lauren and Denise. It was excellent to catch up with those good ladies, and they helped me out with my fabric choice for my Sewaholic Lonsdale dress (pink with white polka dots, because I am not at all predictable. It's really cute, though, so I don't even care) We rounded the afternoon off with a glass of wine and a giggle, and you can't say fairer than that, can you? Nic and I had dinner in the pub before watching a truly mad film - Magnificent Obsession by Douglas Sirk. Sirk himself said he thought this film was mad, and that it was this that allowed it to function as high art. It's certainly a beautiful film, and Rock Hudson is a very charismatic lead but I'm glad I wasn't watching it alone. I needed to have someone to roll my eyes to.

On Saturday morning Nic and I were up bright and early(ish) as we were off to London to go to an exhibition in the Cartoon Museum in Bloomsbury. It would be easy to miss the Cartoon Museum as it is tucked away down one of the small streets that surround the British Museum (Little Russell Street, to be precise) but it's worth seeking this one out. We were going along because right now they have an exhibition of art from Doctor Who comics, and it was superb. I like Doctor Who but don't know a great deal about the comics, and this exhibition was like a history of British comics, with strips by Alan Moore and drawings by Dave Gibbons and David Lloyd. I think my favourite thing was Lee Sullivan's take on the various regenerations of the Doctor, including Peter Cushing: 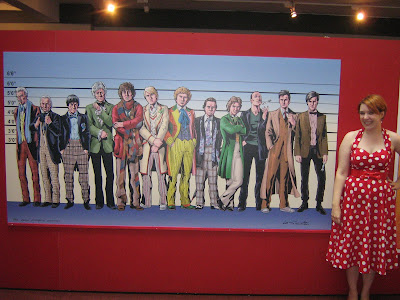 Me with the 12 Doctors, in a Vivien of Holloway frock

Of course, a trip to London wouldn't be complete without a spot of retail therapy so Nic bought a few comics and I bought a pretty frock and a handbag in Soho. The last time Nic and I were in London we stumbled upon a fabulous little shop on Greek Street called Zegerman and Lusky, and naturally enough I made a bee-line for it this time. There were so many things I could have bought, not least this beautiful frock: 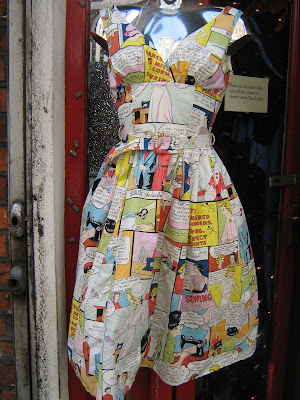 I loved the shape of this dress and the self-matching belt, and of course the amazing fabric. Sadly I couldn't afford it, and I didn't think the bodice would have contained my somewhat generous bosom. Still though, it made me smile to think of a happy lady proudly wearing this awesome print: 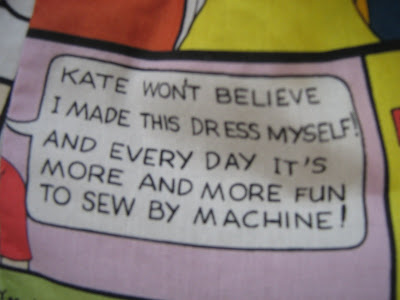 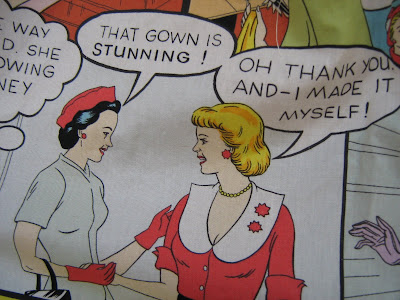 One of the most satisfying things about being a home seamstress 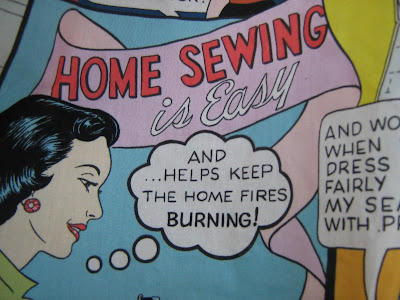 Sadly we didn't have time to explore much further as Nic and I had a date with my friend D in Birmingham, to celebrate his birthday with cocktails and Mexican food in Las Iguanas. Las Iguanas cracked me up, because it was full of screaming groups of women on hen parties or girls' nights out or whatever. There were a group of schoolgirls in tartan miniskirts and straw boaters, a group of bridesmaids accompanying a bride wearing sparkly penis-shaped deelyboppers and one group of women who weren't in costume, but were carrying lots of balloons and would not stop screaming. Entertaining. The food was good and so was the company, and all in all it was a thoroughly satisfying day!

Of course, to make up for all of the excitement Sunday was much quieter. After a lie-in and a cooked breakfast Nic and I ventured out into the sunshine to see what was happening in Leamington.

This is the dress I bought in London, and the bag! Having bought pink polka dot fabric for my Lonsdale dress on the basis that I don't have many pink dresses (which is stupid because I have at least three I can think of, durr!) the next thing I did was to go out and buy a pink dress. But isn't this awesome? Like a peppermint! Additionally, it was drastically reduced so I felt obliged to give it a good home. I'm nice that way. Seeing as I thought the dress made me look like a sweetie, I thought I should play up the candy colours with yellow and bright blue. Yummy!

Not much was going on in Leamington so after having a picnic in the park, I had a quiet afternoon of reading and tidying while Nic worked. Quiet domesticity was most pleasant after a Saturday on the train! And quiet domesticity lies ahead this evening - it's time to get working on my Lonsdale dress! Adieu, my loves, and I shall see you all again soon.
Posted by Roisin Muldoon