It's Keitha here. I'm moving back to Wollongong. It was nice going out with you, but I'm never going to see you again. Oh, and I'm married.

Evening all! Last week proved to be unexpectedly busy and I ended up not having the time to post or really to do much of anything, so here it is, Monday again.


Firstly - the planned bombshell meetup is GO! Lovely Fi suggested moving it to Birmingham but at least this time, it seems like more people will be able to meet in London. I do like the idea of doing something more central at a later date, so maybe a few of us could get our heads together and plan something before too long. As far as the bombshell meetup goes the plan is to meet on Saturday 29th October. I'm thinking we meet in the early afternoon and hang out until the last train home. I'm still provisional on the venue of the bar at the BFI - it appeals to me because it's on the Bakerloo line so it's easy for me to get back up to Marylebone for my train home to Leamington at the end of it, and I know they do cocktails, and they take bookings. However, I am very open to suggestions for alternative venues so if you can think of somewhere you'd prefer do let me know in the comments, or via email. My email address is thestreak@gmail.com so if you could drop me an email and let me know if you're interested, I'll do an email out to everyone to confirm times etc.

Now that that's all planned, my only consideration is what to sew, as I don't yet have anything fancy enough to compete with Suzy and Karen's bombshell frocks. One of my oldest friends is getting married on New Year's Eve so it seems a good idea to sew something that I can wear to both events. I'm leaning towards a Sewaholic Lonsdale dress in satin - maybe bottle green - and hopefully I can find the perfect fabric in one of Birmingham's many fabric emporia when I go along to Debbie and Winnie's shopping trip in Birmingham on 6th October. October is going to rock! It's probably going to be hard on the pennies too, though so I'm going to have to be good until then.

As I said, last week proved to be suprisingly busy. Nic was working hard and I was having one of those boring but busy weeks at work, and it just slipped by. I was working from home on Friday, which meant the chance to catch up on boring jobs and do a few chores as well - the sun coming out eased the pain of that a bit. I went out for coffee with a friend in the afternoon and I took the chance to save a pair of open toed shoes. Amber's realisation that she had some pairs still to save before the weather turned reminded me that I have the same issue. These orange peep toes are by Bronx and were a gift from my friend L. No close-up shot - Nic did take one for me, but my toes look really prehensile in it and to be honest it freaks me out a bit.


I don't really need an excuse to wear this dress because I love it, but also it has a wee hint of orange in it so I could go matchy matchy with the shoes. This is always weirdly satisfying to me. Friday night was excellent - Nic had been given a bottle of champagne to celebrate submitting his thesis so we had that and a glass or two of wine. It was rock and roll, I tell you - we played scrabble, I knitted and we listened to jazz. Listen, I know how utterly lame that sounds on paper but it was really nice, even though I had to unravel my knitting the next day. Alcohol and knitting needles don't mix, kids! Just say no!

I was feeling the effects of that hard-living night on Saturday morning. Feeling like your hangover is unearned really does suck, but a cup of coffee and some pastries and an episode of Flight of the Conchords later I was somewhat revived. Well, I was revived enough to have lunch for £1 (£1!!) in a local Indian restaurant before dashing around town to do some errands. It was still sunny, so it was time to save another pair of shoes. This time, the totally impractical Mighty Monster wedges by Irregular Choice. From a distance they look like they might be suede, but I think they're actually felt - these would not do well in the rain. I do like them, though - even though they're quite mad. 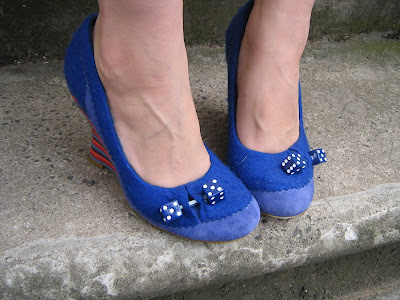 Those mighty monsters close up


I do have a confession to make, though. After I got home I did get changed - I was colouring my hair and my friend SJ was coming to cut it, so I changed into something that wouldn't suffer if I spilled red hair dye on it. I didn't wear these for a whole day, then, but for most of it. Phew, I feel better for confessing to that (!) SJ came round and cut my hair, and then I taught her how to crochet a granny square (see, I told you I was rock and roll) Before long it was time to go out - Lauren and Rick had invited us round to watch Doctor Who before going along to celebrate a friend's birthday at her house. It was a good night - an unexpectedly late night, but a good night, with dancing and drinking and crisps and cake - everything you could wish for from a birthday party, in short. I can only hope that my own upcoming birthday party will be so much fun!

Most of Sunday was spent recovering from the rest of the weekend's debauch, which is fine in its own way. This weekend was the Leamington food festival, so Nic and I took our delicate selves down to the park to see what was happening, and to hang out with Kate and Evelina. The food festival was pretty big this year, with cooking demonstrations, a wine tasting thing, a jazz band and TV chefs, and about 13 (approx) stalls selling churros and chocolate. We found a spot on the grass, listened to the mariachi band and ate churros. It was pretty cool. 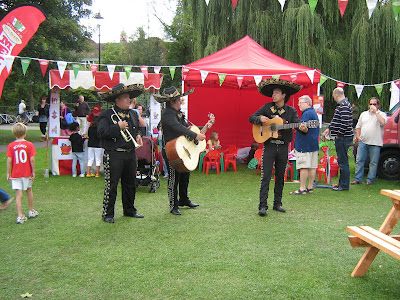 
So, after a hectic week it was good to just have fun with friends this weekend. This week is looking like it's going to be an interesting one, but hopefully I'll be around a bit anyway. For now, it's time to eat pizza and watch a DVD.
Posted by Roisin Muldoon