I knew a woman once, but she died soon afterwards.

Today's post is just some thoughts, because not a lot has been happening since I last wrote. Nic and I were still keeping a fairly low profile over the weekend, because he is still feeling quite under the weather. On Saturday evening I made a chckipea curry, got a bit tipsy on Sauvignon Blanc and watched The 39 Steps (the Hitchcock film, rather than the TV adapatation starring Rupert Penry-Jones from a few years ago. Although, I do remember that one as being quite good and obviously old Henry Penry is a very enjoyable man to watch) 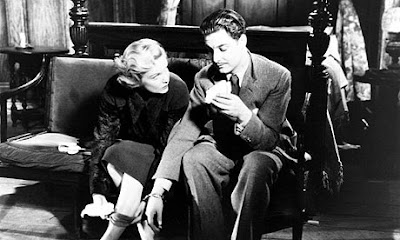 It's been a few years since I've seen the film and I'd sort of forgotten how exciting it is - especially once Hannay has fled to Scotland. Also, John Laurie is so excellent as the crofter and he really reminded me of a certain Dapper Chap of my acquaintance.

On Sunday, Nic and I had a browse around the market that's held on the parade. It seems to have become a Leamington tradition that this is held every Sunday (or nearly enough) between October and Christmas. At the moment there are quite a random assortment of stalls selling random things (like one selling t-shirts with unfunny, sexist slogans on, and another selling dusters and walking stick tips) I would imagine that it'll get more festive as Christmas approaches and in the meantime it's just nice to have a wander around it. I decided that as it was mild, I'd multitask (heh) and save another pair of shoes. This time it was the turn of these green heeled Oxfords by Andre:

These are sort of wardrobe orphans because they're not that easy to wear. They're comfortable and everything, but the high vamp means they're more boots than shoes and I'm not sure about how they look with dresses, which obviously is a bit problematic. I decided to team them with one of my green dresses, the lovely Rita dress by Bettie Page:

I love love LOVE this dress (this picture of me, goofy as all get out, doesn't do this dress justice AT ALL) but I have to confess that I'm not at all sure what I think of it with the shoes. Still, I'm glad I saved them because they are adorable and they hold lots of happy memories for me because I bought them in Paris. I know, blogger cliche they're so OMGFRENCH, but whatever. I love them because they were serendipitous - much like my red cowboy boots - I suddenly decided I wanted some heeled Oxfords and within days these popped up. I'm just going to have to figure out other ways to wear them because I do like them. Also, I don't have any other green shoes so they do fill a wardrobe gap.

Denise and I had planned to spend the afternoon sewing, but tea drinking and chatting got in the way of that somewhat. Still, that suited me just fine because a totally lazy Sunday was really what I wanted. My sewing productivity has taken a bit of a nosedive since the weather turned cold, but that's fine. My almost finished Peony dress is staring at me reproachfully from my sewing corner, but she's just going to have to wait. On Sunday all I wanted to do was eat chocolate biscuits and gossip, and that's what I did.

I have a week of meetings and proofreading ahead of me, but I'm super excited about the weekend and the Bombshell Dress meetup. I need to figure out what I'm wearing, and also what cocktails I'm going to be drinking, but these are mere details. Lots of lovely ladies will be joining me, and if you feel like coming along drop me an email or leave me a comment. The more the merrier!
Posted by Roisin Muldoon