There's nothing like starch, you know, when you're depressed.

Good Monday to you all my dears! I had an unexpectedly busy week last week - I spent much of the week in a spin, trying to figure out what on earth was going on. The bit of the NDPB I worked for transferred into a new executive agency last Monday. The change in my job should be minimal - I am coming to work in the same building, working with the same team and doing roughly the same thing - but last week was still a steep learning curve as we all struggled to get to grips with life inside the Civil Service. It was a strange week, with all of the stressful things about starting a new job like new systems and new rules, without any of the fun stuff like new people or a new commute. We had a little party at the end of the work day on Monday and never has a glass of lukewarm wine been more welcome. Most of last week at work was like struggling through treacle as everything that I knew how to do was taking twice or three times as long. I complained LOTS last week so I'm not going to moan about it now, especially as I am feeling much more settled in. I do have lots of interesting things coming up in work over the next few months as well, so while I don't believe for a second that my days of standing next to the photocopier for hours on end are over, at least there are some other interesting things happening too.
For most of last week I wanted to come home and hide away in bed when work finished, but I forced myself to be more sociable than that because it does me good. On Tuesday night, Nic and I went to see Tinker, Tailor, Solider, Spy with our friend Greg. I have to say, it was the nicest cinema experience I've had since we went to see Pat and Mike in the NFT about two years ago. Apart from the fact that the cinema was freezing (it always is, though) it was lovely - there was hardly anyone there so no talking, no texting, no kicking the back of my chair. I loved the film as well. I'm sure anything I say about it is probably pretty redundant, but I loved how it looked - everything looked so drab and tobacco stained and the scenes in Budapest looked just like how TV at that time looked, if that makes sense. I'm a big fan of Gary Oldman generally and his performance was so quiet, I found it really compelling. Greg said what he liked about the film was how shit it made the 70s look, and I found that appealing as well. Normally I really suck at following just what the hell is going on in spy films, but I did manage to follow this one and even to work out who the mole was so I felt pleasantly smug as we left the cinema. You can't beat that for £4.90!


Wednesday was possibly the worst day at work last week, mainly because of a mind-numbingly tedious all day meeting. By the time I left work I was thoroughly hacked off, and discovering that I'd forgotten my keys and was, therefore, locked out of the flat was just the cherry on the sundae. Dinner and the walk down to Sew Make Believe ironed out some of the rage and any remaining was killed completely by the book club meeting, which Kate blogged about here. It was excellent to spend the evening in the company of like-minded women and the discussion about the book (Past Imperfect by Julian Fellowes) was intelligent and interesting.


After that it was a downhill coast into the weekend. Lovely Hannah was celebrating submitting her PhD thesis so on Friday night we went along to the New Inn to celebrate with her. The company was excellent, and it was brilliant to finish off a crappy working week with lots of gin, but I really dislike the New Inn. It has some merit on a nice day as the garden is lovely, but inside the pub is poorly laid out, and I think Tubbs and Edward would be more welcoming to non-regulars. I got chatting to a man at the bar who had a really cute springer spaniel puppy (which chewed holes in my umbrella! but never mind) and he thought it was appropriate to compliment me by rating my attractiveness. I scored two extra points for my Irish accent, apparently. Yeah, that's the kind of pub it is. Poor Nic found himself in an argument with another patron over which film was 'gayer' - Footloose or The Wild Bunch. I think it'll be a while before I go back, which is a shame because otherwise we had a good night.


I was pleasantly (very pleasantly) surprised to wake up hangover-free on Saturday morning. I had to abandon my plan to go fabric shopping in Birmingham because - well, October is going to be an expensive month. Instead Nic and I took ourselves into town for a wander around, some grocery shopping and a little browse in the charity shops. I thought I'd give one of the dresses I bought in Northern Ireland a spin:

This is a nice wee dress and it was a bargainous £12 in the sale. The colour combinations are a bit random - there's some highlighter orange in there, and also it falls just too far above the knee for it to be wearable on a windy day. I quite liked how it looked with these blue tights, even if I am a bit sad that we're now into tights weather. This was a nice, comfortable outfit to wear to run around town and do errands before getting changed into my party frock for Louise's birthday party that night.

Nic and I weren't able to stay out too late at the party as we were getting the bus there and back, but we were there for long enough to have a few drinks, a dance, and a lot of fun. The birthday girl had made her own frock and she looked fabulous: 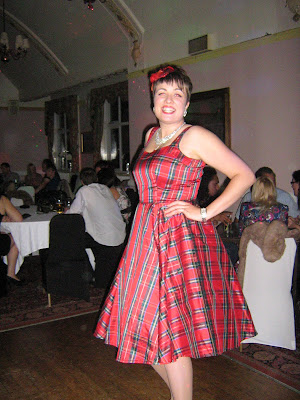 Louise in her handmade finery 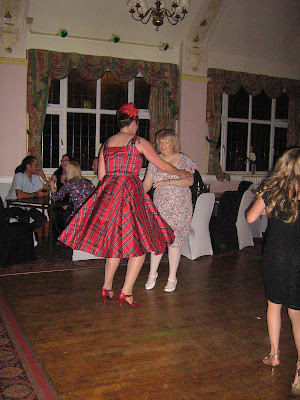 I wore my lovely Vivien of Holloway Anchors Away dress, and it was lots of fun to twirl around the dancefloor in it. I do have a few photos of me and Nic but you're going to have to excuse the gin face in these! The flash is NOT MY FRIEND. 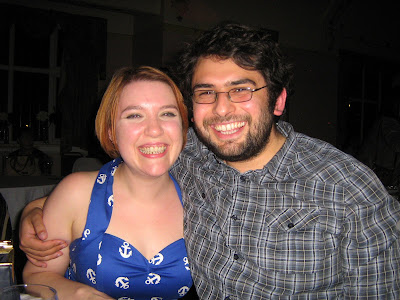 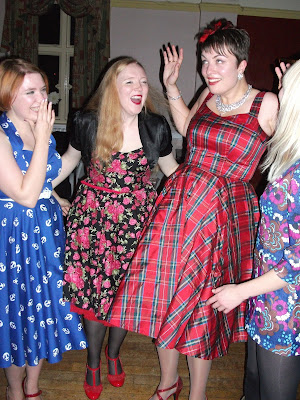 Getting home nice and early had one major advantage - I was able to finish my book in bed with a cup of tea. How rock and roll am I?! It did mean that I was sunny and chirpy on Sunday and able to enjoy the warm day and save a pair of shoes:

The Sunday markets have started in Leamington - they run most Sundays from October until Christmas and it's nice to wander up the Parade browsing around the stalls. The shoes my sisters bought me for my birthday were reasonably comfortable for this. I mean, you wouldn't want to walk long distances in them but I think they held up well, and they're so unusual!

I'm calling these saved in my Shoe Challenge. I'm not sure if I'll get the chance to wear them again before the challenge ends on 14th February!

The rest of this week is going to be busy. I'm going out on a school visit tomorrow, and then I've got workshops for the rest of the week, and in the evening I'm going to be busily sewing away - making myself a Colette Patterns Peony dress. Possibly two - I might get a bit of a production line going on as I have two lovely lengths of fabric to make this frock in, and I don't know where to start! With that in mind, I'd best get started. I've got some tracing to do, especially if I want to wear either frock to meet some of my idols in November. Yes, some exciting times coming up! So it's off to work with me...
Posted by Roisin Muldoon