Yeah! And when they do we say that wolves did it! It happened in Australia!

Hello strangers! Did you all miss me? Oh well, never mind, I'm back from my holibobs now. I've had such a lovely week that even this Sunday evening feels holiday-ish rather than Sunday evening-ish. Nic has just cooked me a delicious dinner and we've got the windows wide open to enjoy the unseasonably warm breeze. Life feels very good right now!

I had an absolutely super birthday, I have to say. I've been totally spoiled. On Friday afternoon I dashed out of work to get home to ready the flat for my birthday party. I don't normally work in the office on a Friday and the day itself was quite stressful, but once we'd got home and the flat was tidied all the stress of the day was forgotten. I didn't get any photos from the party itself but it was lovely, and of course it was really fun to get dressed up and raise a few glasses with my friends. Lysy baked me my favourite cake - Victoria sponge - and many people came bearing champagne and cava so our fridge is well stocked for the next wee while. I had to be conservative with my boozing, however, as we had to be up bright and early the following day for our flight back to Ireland. My friend DS was staying with us, and after a delicious breakfast in Bread & Co he kindly took us to the airport. The flight and everything was fine, and it was really good to get home to my family. The week at home could have been a bit of a disaster due to something unexpected and difficult that my parents were dealing with, but actually everything was fine.

I woke up on Sunday morning to Nic singing me happy birthday and giving me my birthday presents - a gorgeous navy dress (photos to follow at a later date) and tickets to see The Divine Comedy in Stratford at the end of October! Shortly after this my mum knocked on my door and I went down to the kitchen for breakfast and more presents - gorgeous mustard platforms and a bag from my sisters and perfume and a cardigan from my parents, plus a little trip to Dublin at the end of the week! Spoiling like this is dangerous, I could get used to it. It was drizzly and wet so in lieu of a day out my sister took us all to a local shopping centre where I spent some birthday money on some dresses (I know, what a surprise) It was a very satisfying way to spend my birthday. The rest of the week was quiet and Nic and I spent it mainly around the house reading and watching trashy TV with my mum. Fine holiday fare. I won't bore you by telling you about all of it, but I will instead bore you with some photos: 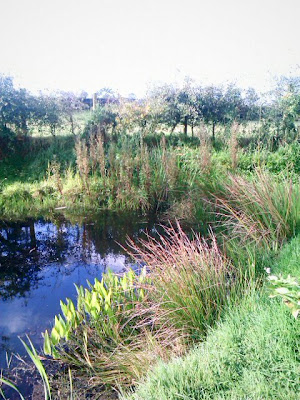 As the sun came out, I was able to have breakfast by the pond - a nice treat for September. The garden was looking good and we were able to have sweet apples from the tree and plums as well - although picking the plums left me with a caterpillar on my neck, which was less than desirable.

On Wednesday it was gorgeous so we headed down to Dungannon Park with Colleen and one of the dogs. Dungannon park is beautiful, and we took the long walk - right around the lake and up to Top Field, past the Moygashel linen factory buildings. 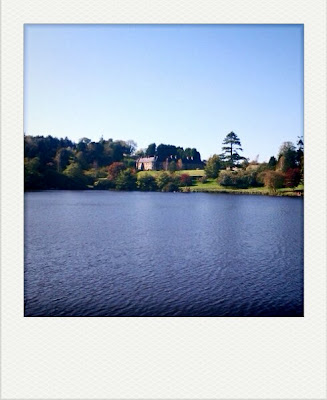 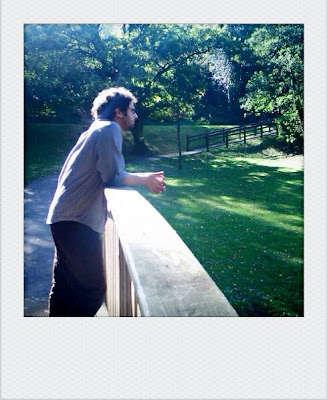 Nic on the bridge at Mill Race 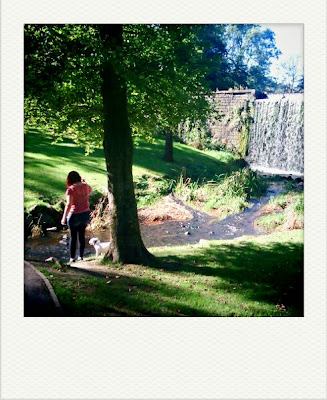 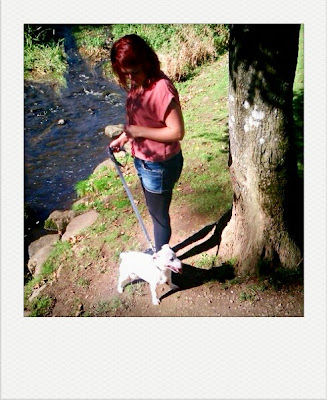 Colleen and Minnie exploring the riverbank by the waterfall 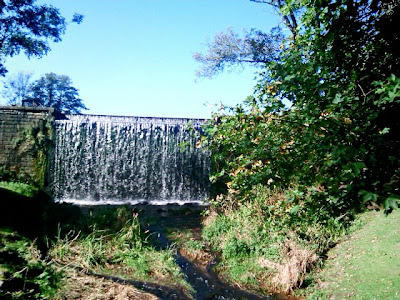 The waterfall - it sounds very dramatic when you're next to it!

On Thursday we visited my grandma and had a delicious takeaway from Indian Spice, and then we were up bright and early on Friday for the drive down to Dublin. Both of the dogs were sad to see us go: 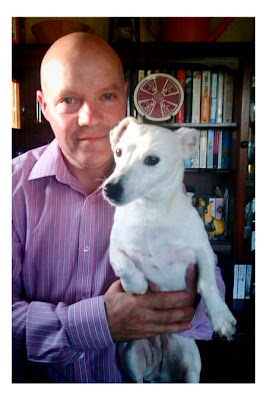 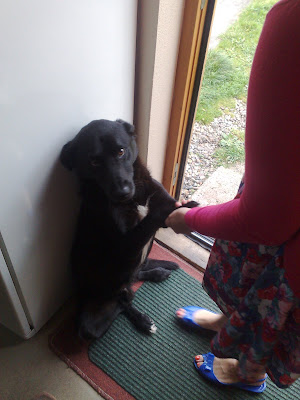 Poor old Paddy, he's the gentlest dog you could hope to meet but the lift definitely doesn't go the whole way to the top!

It's been a few years now since I've spent any time in Dublin and Nic and I were both very excited. We checked into our hotel, The Pearse Hotel and were greeted by this cute little message: 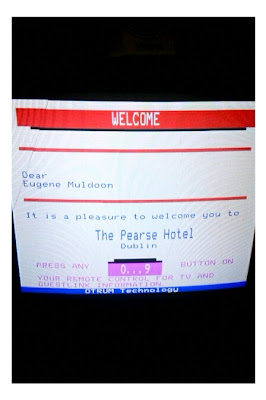 It was pretty surreal, actually - there was this and Vivaldi's The Four Seasons playing somewhere, but it was a lovely room. We got settled in and then headed into the city centre for a roam around. We started off at Grafton Street, and were immediately buttonholed by this sweet but eccentic busker, whose name was Conor: 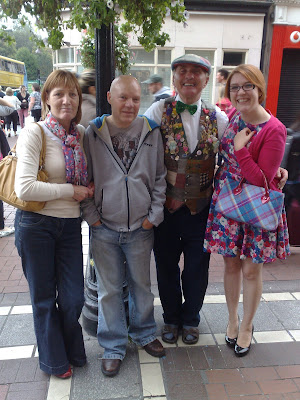 He was sweet, though. He called me a princess and took this photo of our little party: 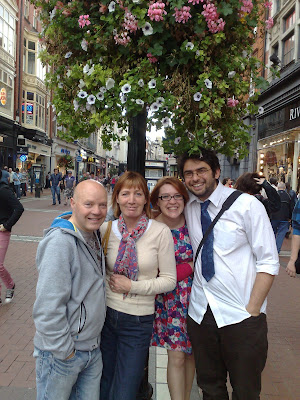 Nic with some Muldoons
I was snapped with one of Dublin's most famous ladies, Miss Molly Malone: 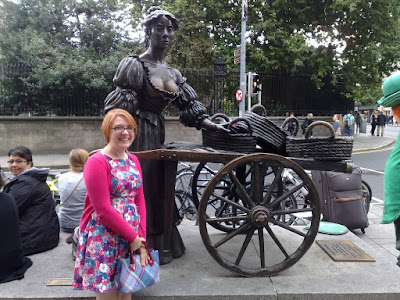 She looks good, doesn't she? With a decolletage like that, it's no wonder she was immortalised in song.


It looks nice and sunny in those photos, doesn't it? Well it started to rain shortly after that and it did not stop. It was still raining when we left Dublin the following day. After a wander round Grafton Street we headed up Wicklow Street and into the Secret Book and Record Store. I didn't buy anything but I was ridiculously pleased to see a bookseller behind the counter that I recognised from Armchair Books in Edinburgh. Maybe the world of second hand books is a small one! In any case, the two bookshops I mentioned are two of the finest I've had the joy to frequent, so it was nice to find a connection between them. From there we headed up to the George's Street arcade and the nearby vintage shop Harlequin - both favourite haunts of mine duing teenaged visits to Dublin. The arcade itself is a beautiful Victorian covered market and it's home to independent shops and stalls selling all sorts of treasures: 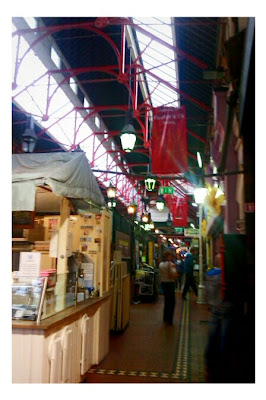 A poor camera phone shot of the market interior 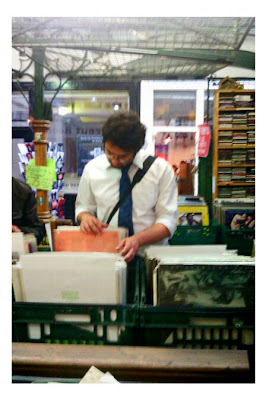 One of the shops is Retro, another favourite of mine from my teenage days - then I was interested in the velvet and hairdyes, now it was the Bettie Page and Stop Staring dresses. Poor Daddy spent half an hour trailing round after me while I sighed over the nice dresses I couldn't afford - lucky man! After a very wet walk back to the hotel we were off out again, this time to Temple Bar for dinner in The Alamo - the same Mexican restaurant my parents took me to on my birthday last year. If you're in the Temple Bar area, I can't recommend The Alamo highly enough. The food is so good and so is the atmosphere - and I am very tickled by the fact that along with all of the amazing Mexican food, you can also order Irish Stew. We went for a few drinks afterwards and had a late night, so a cooked breakfast was very much in order the following morning in the hotel. The rain had continued, so we were forced indoors and visited the Powerscourt Town House on South William Street. This is one of my favourite places in Dublin, not necessarily for the shopping but just for the building itself, which is incredible: 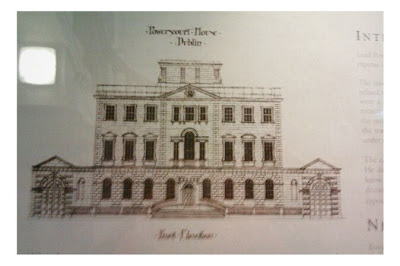 Drawing of the front of the building 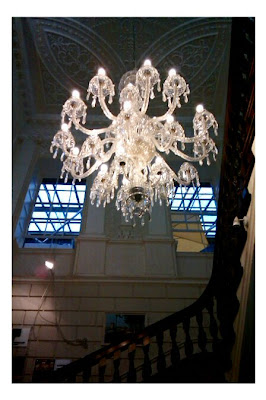 How many shopping centres have chandeliers? 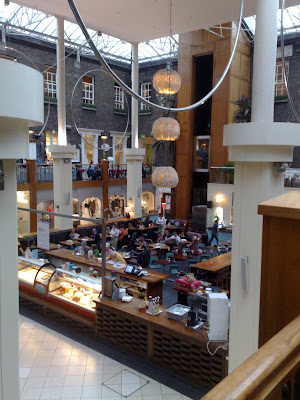 Powerscourt is a Georgian townhouse, formerly home to Viscount Powerscourt. The courtyard was glazed over and now the house is home to elegant shops and bars. It's just a really cool place to visit, even if you'd need to be independently wealthy to be able to afford to buy anything in here! Before Nic and I got on our flight back to Birmingham, we headed out along the coast to Malahide and Howth to get a bit of (cold, wet) sea air. It was delightful, and I really didn't want to leave. It was a delightful week at home.

Landing in Birmingham to beautiful sunshine was no hardship and today I rounded off the holiday with a picnic in the park. It was nice to dig out the sunglasses once again!

I shall leave you here with a few last photos of my week, and I'll see you all in a few days. 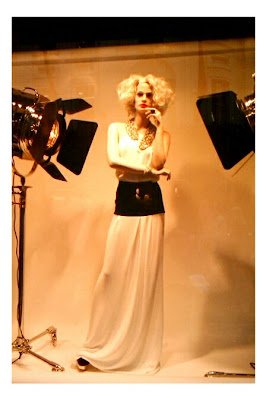 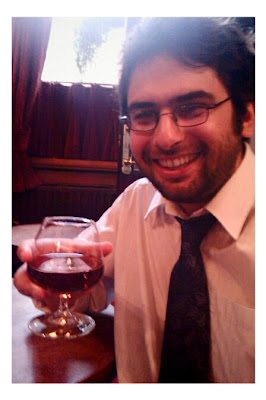 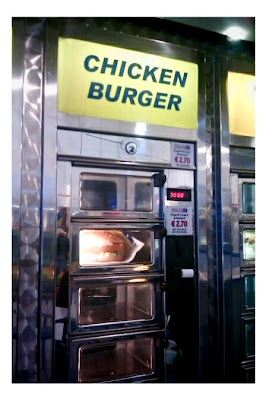 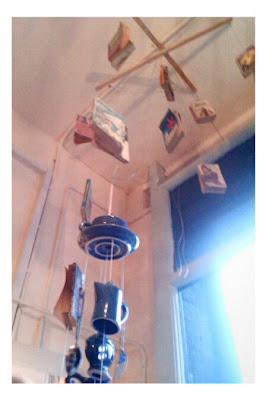 I loved this mobile in The Winding Stair, made from books and a teaset.
Posted by Roisin Muldoon