It's Sunday afternoon yet again, and I'm gearing up for a cosy evening with The Box of Delights, some mince pies and a pot of tea. What a rock and roll life I lead!

Nic and I had another busy week, and I honestly think it took me most of the week to recover from that ridiculous night in Leeds. Like I said, rock and roll! It was a good week, though. I've been working hard, and starting to make some decisions about work, which is a good feeling. I also had Nic join me in work again on Thursday, which was really lovely. He was doing some editorial work for my team, and I know this is going to sound well soppy, but I really enjoyed working alongside him, and showing him what my job entails. It was also good to spend time with him during the day, because we'd both been so busy during the evenings in the week.

On Wednesday night I was leading a crochet workshop at Sew Make Believe. I'd had a long and busy day at work, followed by leaving drinks for a colleague who is going off on maternity leave (during which, I accidentally kicked over a drink and got diet coke IN MY SHOE) so when I got home the last thing I wanted to do was go back out into the cold. Of course, I was really glad I did. We had a few totally new members who wanted to learn how to get started on crochet, and a few others who just wanted a bit of guidance. I taught the newbies, while Jo and Catherine looked after the others. It was enjoyable - all of my novice crocheteers went off with their own granny square - and it was good practice for next weekend. I'm going to be volunteering with the Craft Club and The UK Handknitting Association at the Clothes Show Live in the NEC, teaching yarn craft and talking about the Craft Club. The bonus is an exhibitor's pass to the Clothes Show as well, and I'm hoping to have fun at the Irregular Choice concession!

On Thursday evening Nic and I headed over to Warwick with Lauren to meet Louise at the Warwick Victorian evening. The town was absolutely crammed, but it was a lot of fun. Louise was dressed as Sherlock Holmes, and she looked fabulous. It was very enjoyable to potter around the shops, drink mulled wine and soak up the festive atmosphere. Aspire were open late and were offering a discount and free wine - and although there was no sign of wine, my darling Nic took advantage of the discount and treated me to a new dress! Photos to follow, but needless to say I felt very spoiled indeed. We finished the evening with a drink and a natter in a cafe, before heading home for a very late dinner.

After such a busy few weeks, a lazy weekend was what I wanted and that's what we've been up to over these past few days. I was working from home on Friday, which gave me the chance to catch up on work and to pop out during the day for a cup of tea with my lovely friend Lucy. We went to Stone Monkey, and on my way there I spotted this grafitti: 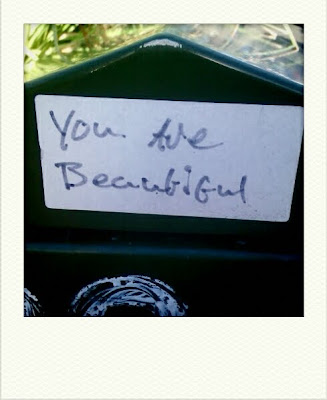 I know it's soppy that I stopped to take a photo of this, but whatever.

Later that afternoon I was able to catch up with Denise, before Nic and I headed out for a few drinks with Lysy, The Scientist and SJ at The Somerville. It was just one of those easy sociable days that was full of happiness and laughter. And some cake and gin, of course. Saturday was similar, with Nic and I doing little more than pottering in town and meeting Will and Viv for a drink in the afternoon before coming home to watch a film. We watched The Town, which I was sort of hoping would be like Gone Baby Gone, but with Jon Hamm in it. It wasn't, so much. It was very enjoyable but really silly - it didn't help that I found the central premise to be very silly, I suppose. It felt a bit underwritten, and Pete Poselthwaite's Northern Irish accent was truly, truly terrible, but the cast is good and it was very enjoyable. It was also good to see Jon Hamm outside of Don Draper, and he was pretty good - even if I'd really rather have had a bit more of Titus Welliver's character.

This morning I slept late, had sourdough toast and hazelnut coffee for breakfast, before heading out into the sunshine with Nic for a browse around the market. It's still very mild, even if it is a bit windy.

It was warm enough for bare legs, but not bare arms - and this dress has a cut out back, so of course I wore one of my many cardigans.

This picture is SO TWEE. I don't even care, because this dress has pockets.

The girls in Aspire said this dress has been selling really well, and I can see why - it's so lovely! Nic picked it up because he was drawn to the print, and I think that's my favourite thing about it. I'm going to try wearing it with my hair in a beehive and knee-high boots.

After a wander in town, Nic and I came home to do some lunch and some chores. While he made the lunch I tackled some mending. Last week I bought this dress in the Dolly Dagger sale, and it arrived on Friday. I needed to shorten the shoulder straps a bit to keep it up, which was fine, and the dress is very pretty but I'm not altogether pleased with it overall. It had a concealed side zip which was really difficult to zip up over the waistband seam. The dress fits - in fact, it's a size bigger than I would normally buy - and this is often the case with invisible zips and seams. I managed to get it to zip up to wear it to the pub on Friday night, but when I tried it again today the zip just burst. It's not a huge deal, but the dress is brand new and would have cost £100 at full price (not that I ever would have paid that) and I think the cheap, nasty zipper really lets the dress down. The fabric isn't even that bulky at the waistband seam. I took the broken zipper out, and replaced it with a non-concealed one which I handpicked, making the side zip lapped. It's much sturdier, obviously. If I hadn't been able to sew I would have been gutted, though. I know it's usually the case that mass-produced garments are finished with less care than hand-made ones, however this dress is from Dolly Dagger's own line, and I'm disappointed that, having spent my money with a small UK business, that the quality did not match my expectations. I don't want to moan, but I think it's a pity. Still, with the adjustments I will be able to wear the dress and it's certainly lovely, but I think the next time I want a dress in this style I'll just make my own.

Anyway, that's that sad and sorry tale out of the way. The next time I wear the dress I'll be sure to get a photo of it, but it's just something to be aware of if you decide to spring for one yourself! Now, Nic has just put the kettle on and there are some mince pies warming up in the oven - I'm going to leave you here and watch The Box of Delights. If I'm leaving you wanting more, however, you can find me over at a fabulous TV blog I've started contributing to, Set Top Box. Happy reading!
Posted by Roisin Muldoon