I think for it to be blackmail, it would have to be a formal letter.

Dressember Days 27 and 28: Stormy weather
Apparently the Met Office have an amber weather warning out for gales in Northern Ireland. I can believe it - I lay awake for most of last night listening to the rain driving against the window. It's a nice cosy sound when you're buried under blankets, but I did worry a wee bit that Nic's flight tomorrow might be affected. I don't think it will, though - hopefully the wind will have blown itself out by then.

Anyway - apart from a quick trip to Sainsbury's with my mum last night I didn't really venture out of doors yesterday and passed an enjoyable day reading and watching TV and playing with the dog. My holiday posts can't be very interesting because when I'm at home this is all I really want to be doing. I tested out one of my sale dresses yesterday - an orange floral Oasis number:

Not too much of a tale with this one - except this is one I have waited out. I liked it at full price but it was too dear, when it was reduced to £45 in the summer sale it was still too much - but for £10 I wasn't going to turn my nose up at it. The only criticism I have is that it has those hanger ribbons and on a dress with a side zip, they tend to get stuck in the zip - and this one did, or rather in the hook and eye above the zip, which is really annoying. I got the scissors to them, anyway. The fabric is really gorgeous - a deep orange with a lovely floral print: 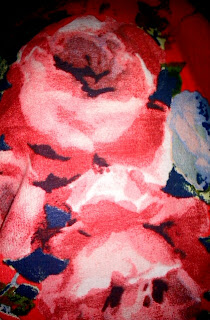 Today was a wee bit more active. Over breakfast I indulged in a big mug of coffee and my latest addiction - Made in Chelsea - before getting dressed and going to Cookstown with my parents. I got another frankly terrible photo before going:

My adorable Louche dress, which was a present from Nic. They had a few in the Aspire sale, there, but I think they got snapped up pretty quickly. I love, love, LOVE this dress. Of course, it was covered up by my coat when we were in Cookstown because the wind and rain were so bloody extreme, but still. I added to my shoe total after cracking in the sale in McConnell's. I don't normally go in for boots as I find it difficult to get them to fit my birdy calves so when these did, I hopped. My mum agreed that I should get them but told me most sternly that this should be it shoe-wise for a while. She's not wrong - for in addition to the Irregular Choice pair I bought last week, and the shoes my parents gave me for Christmas my sister gave me a pair and I recovered a pair from here as well. The shoe challenge has just got that wee bit harder. First world problems! 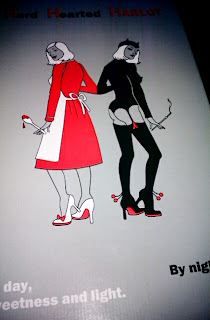 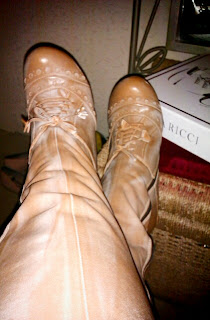 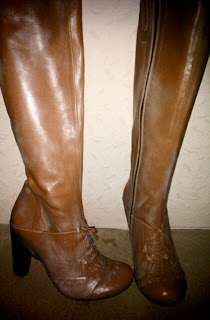 That said, I don't regret buying these - they're a light tan colour so will wear well into the Spring, and I really like the brogue detailing at the front and the unusual wooden heel.

Not much planned for this evening, now - perhaps more shouting at the soaps. I had the dubious pleasure of watching the Eastenders Christmas episode twice. It really feels like the BBC were pulling out all the stops to totally bum everyone out over Christmas because that shit was BLEAK. Even the dog objected - she stood up and howled for a full five minutes during the episode. Apparently this is something that she only does when Eastenders is on! As I mentioned before, not having a TV makes me overdose a little on rubbish TV when I'm at my parents' house and the same goes for the soaps. Although, for real, how is anyone meant to believe that Steve McDonald (and, indeed, the rest of the people of Weatherfield) could be stupid enough to believe anything Tracy Barlow says? His acting is so, so, so bad as well. Also, how does Peter Barlow keep getting women to sleep with him when he is such a loser? Such are the mysteries of soapland.

Perhaps I'll be back tomorrow - Nic arrives in Northern Ireland for a week of fun before real life starts again. I can't wait!
Posted by Roisin Muldoon