This is an unholy alliance. This is two storm fronts colliding. This is the apocalypse for us all.

Hi all, remember me?! I have had a busy busy few days and haven't had much time to update, I'm afraid. And I didn't manage to get a photo at all yesterday, but that's the way it goes sometimes.

Wednesday was my second work Christmas do - this time with my team. We had a meal booked at DC6 Diner in Coventry after work, and I wanted to get a little bit dressed up for the occasion. I had a busy day with a few big meetings, but it was all good. SJ once again kindly obliged with the photos. It was Waving Wednesday, apparently...

This photo was taken in our secure room, and that's Coventry so fetchingly behind me. Here's one where I'm not looking quite as dorky:

Okay, so this is the dress I bought from Dolly Dagger and which made me cross because it had a cheap-ass zip. It's a really pretty frock but I'm going to be irritated for some time to come about the zip thing, I think! I'm wearing a petticoat under it here and a camisole from M&S because otherwise it's too low cut for work. Sparkly shoes are the natural accessory for a gingham dress and lots of people remarked on how festive my attire was.

The Christmas party was great and I can recommend DC6 as a venue. The vegetarian options sucked, though. I did not enjoy the food, but I think on another occasion, when not restricted by festive menu options, it might not be so bad. The venue itself is very cool, though, as it's a decomissioned plane parked at Coventry airport. I took a few photos of the inside: 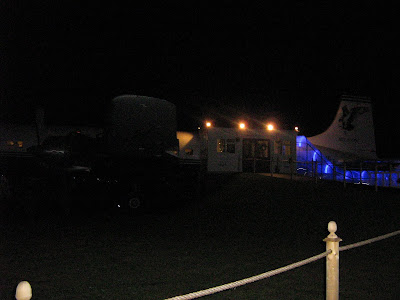 The approach to the plane 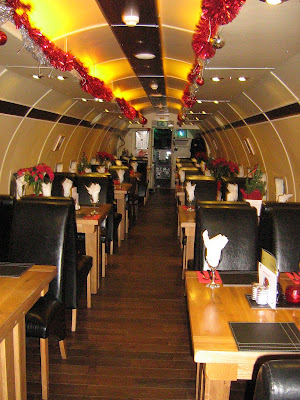 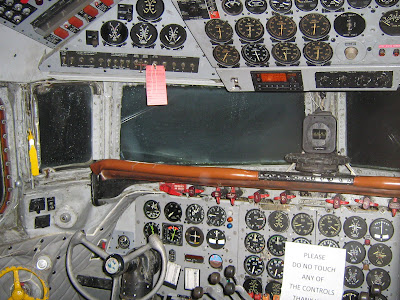 Sadly they don't bring the food on a trolley

It was a really good night, even though the food sucked. I didn't drink too much because I knew I had to get up early on Thursday morning as I had a full day of meetings in London on Thursday. Sadly the assbaskets at Apollo Cinema, Leamington Spa made sleeping impossible as they started cleaning their carpets at midnight and the noise of the generator kept us awake until nearly 3 o clock. I went out to investigate what the noise was and gave the carpet cleaner a piece of my mind. I'll be putting in a complaint to environmental health, though.

Anyway, all of that made Thursday a chore as I had a long and thinky day. I looked like crap, too. Hence the no photo. But I did wear a dress, and a new dress at that. I slept on the train on the way home and had just enough energy to join some friends for Christmas dinner in the pub that night. The food this time was much better, and it was a really fun evening.

I'm working from home today and have been busy once again. I popped out in the morning to see my friend Lucy and her gorgeous little boy and it was absolutely lovely. The forecast snow didn't materialise (thankfully) and it was really mild, so I wore this:

I love this dress so much, it was so cheap and such a nice surprise that something like this could come from Debenhams. It's a copycat dress - I saw Lauren wearing hers and shamelessly copied her. She didn't mind, thankfully - and we've yet to show up at the same place wearing the same thing.

I still have some work to do so I'm going to head off. But, to make up for my lack of outfit shot from yesterday I will do two tomorrow. I'm heading out tonight to go dancing with my darling Louise - I just need to decide what I'm wearing! See you all tomorrow.
Posted by Roisin Muldoon