We're Mary and Joseph, just like the Bible. But we've got Cheryl, not Jesus.

Evening all! It's windy and rainy and horrible outside, but I'm tucked up all warm in our wee flat with a hot water bottle and a blanket. It's all about comfort this evening, right down to dinner - macaroni cheese. I have a busy week ahead of me and then it's HOLIDAY TIME, so yay!

I have a couple of Dressember dresses to share with you. Nic and I had a lovely lazy breakfast in bed on Saturday morning - coffee and bagels and a CD and sunshine. It was lush. I had some Christmas shopping to do, and the highly exciting task of going to the Post Office. We were joined by Tom, who was revisiting Leamington for one night only, and we had a good afternoon of catching up, drinking coffee and Christmas shopping.

I wore one of my Laura Ashley dresses. I didn't want to pay full price for this dress because it was ridiculously expensive and when it came up on ebay, I paid more for it than I normally would. For all that, I often forget about it - which is a shame because it's so beautiful. It's silk, as well, so it feels very luxurious to wear. I have a petticoat underneath because the skirt is a wee bit long, and it gives it an extra bit of shape. The Lady Dragon shoes attracted attention again - some random man on the street invited me to tap dance with him! To be fair, I don't think he was being weird and it was his odd way of paying me a compliment. I think he was a bit embarrassed afterwards though, he scuttled right off! I took myself off to Cafe Havana on Warwick Street to join Nic and Tom for lunch. It's a gorgeous little cafe with some very tasty food, and quite an eccentric menu. They've named some of their dishes after famous people, and I was really amused by how they did it - the BLT was named after Gloria Estefan! Before I move on to the next portion of Saturday, though, I'm going to be slushy and share a picture of Nic:

Nic in his hat - I knitted his scarf.

After a speedy but delicious dinner of vegetarian hot dogs, it was time to get ready and head out. Denise and Michael were having a Christmas party and we were going along to that. Denise is also taking part in Dressember, and we were unintentionally colour-co-ordinated!

With Denise - I'm wearing my Bettie Page Rita dress, Vivienne Westwood for Melissa Lady Dragon shoes and tights from Untold at House of Fraser. Denise is wearing a dress from Spotlight at Warehouse and suede shoes from Office

Denise made a concession towards Sparkling Saturday with her tinsel, but I didn't. I'm not on Facebook and the Dressember people don't seem to be interacting much with the Twitter stream (@Dressember, if you want to follow someone who never tweets) so I didn't bother. I wanted to wear this dress again anyway because it's so gorgeous. I can never seem to capture the colour properly, it's almost a Kelly green in real life.

A combination of the flash, hot apple punch and the heat in Denise's house gave me a good old red face but oh well - more festive, I suppose! I decided earlier in the day that I wanted some seamed stockings to wear and these were what I found:

Wavy seamed tights from Untold at House of Fraser

The party was lots of fun, and it was very good to meet a few new people and to spend time with friends. The hot apple punch and mince pies were most enjoyable as well! We ended up having quite a late night, and so a good long lie-in was in order this morning.

I have done very little today with the exception of going out to see Lysy and The Scientist, so we could catch up and exchange our birthday presents. We bought each other a copy of the Colette Sewing Handbook and were finally able to exchange them. In honour of this, and in an attempt to inject some colour into a grey and rainy day, I decided to wear one of my many Colette dresses - my curtain Rooibos:

Colette Rooibos dress, yellow cardigan from H&M, tights from Peacocks and yellow sandals from Next

Although I don't plan on doing much sewing until after Christmas, I was very excited to finally be able to look through the book and I can already tell it's going to be indispensable. As well as the book, Lysy had brought me a present from Paris - a box of macarons! 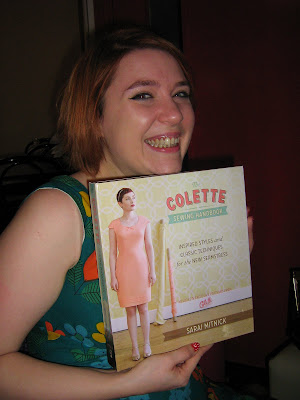 Here I am, full of excitement at the prospect of an afternoon with macarons and a sewing book. IT'S THE ROCK AND ROLL LIFESTYLE.

Speaking of that Rock and Roll lifestyle - I have macaroni cheese to make. See you tomorrow!