I'm not sure, but I'm pretty sure I'm in a dance-off. All right!

It's been back to work with a thump for me this week! All week I'm commuting between Leamington and London, which means that I'll have clocked up 20 hours on the train by Friday! It's madness, but I guess it means I'll have a few days of flexitime to use up by the end of the month. It's all making me extra grateful for my extended Christmas break, which admittedly is feeling further and further away. I'm feeling pretty mellow about it now, let's hope I'm not feeling totally disillusioned with the world by Friday night.

With all that in mind, I tried to have as lazy and relaxing a Sunday as possible. Nic was working, and I pottered around and tried to organise my thoughts for the week ahead. Nothing very exciting, but it was important. I'm also conscious of a deadline looming for the Shoeper Shoe Challenge, so I saved another pair of shoes:

Flick Flacks! I have three pairs of these shoes which, I admit, seems excessive. I'd consider buying more in different patterns, though. Maybe. I just think the little foldy cuff detail is darling: 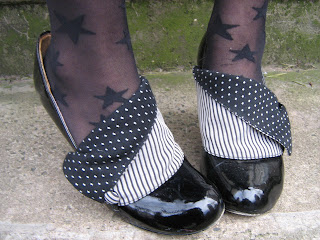 These were the first pair I bought and although they're a smidgen too big (which I think you can see in the photo) in some ways they're my favourites. I think it's because of the pinstripes - they make me feel like a 20s gangster, or some shit like that. It doesn't do to overanalyse this stuff. The dress is by Emily and Fin and I like it a lot, but I'm also a little bit irritated by it. Something about the neckline doesn't sit right so I'm going to have to do a little bit of an alteration to it. Anyway, I love how it looks and it's really nice to wear, so I'm sure I'll get over my little snit at it. Also: POCKETS:

I was dressed up anyway - but then, I'll happily get dressed up to sit around and knit and watch The Office - so when Nic suggested taking me out for dinner we thought we'd like to go somwehere really fancy. And Leamington totally FAILED us, on that front. Leamington is a lovely place to live, with a few cool places to eat but it has no really fancy restaurants. It has every bog standard, boring chain pizza place from Ask to Zizzi's, but if you don't want to eat pizza you don't have much choice. First world problems, eh?! We went to Sabai Sabai on Regent Street, which to be fair, was delicious. It was just good to go out for dinner and a lovely way to end what was a wonderful holiday.

Now, I have to be up very early in the morning but before I go - at Lucy's request, here's a picture of the heels on the Serpintime heels I wore in my last post: 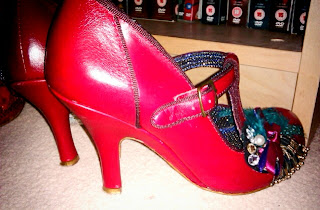 Goodnight, all!
Posted by Roisin Muldoon