It is on like a prawn that yawns at dawn

Why hello there my dears, happy Saturday! Nic and I are back in Leamington now after a truly wonderful Christmas and New Year break in Northern Ireland. We had a very quiet last few days in Dungannon because the weather was so horrible, which kept us indoors. Still - it gave Nic time to get some work done, and it gave me time to finish reading one of the books about Fred West that my mum lent me. I didn't bother with the second one - there's only so much festive reading one can take! On our second to last day in Northern Ireland it finally stopped raining for half an hour, and we were able to have a wee dander round Dungannon, and I took my new Harlot boots out for a spin:

You can't see them in this photo, but I was also pretty happy with my earrings. I bought these for £2 in the sale in Sainsbury's: 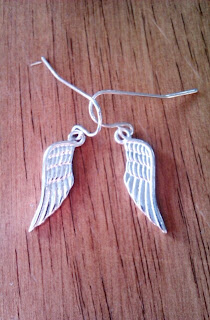 Aren't they cute? They reminded me of a gorgeous pair of Pilgrim earrings that I once bought for a friend (and ever regretted not keeping for myself) but they're also a little bit mysterious because they are by F&F at Tesco. I bought them in Sainsbury's. As mysteries go, it's not the biggest - but why were Sainsbury's selling earrings that were labelled as being from Tesco?!

That evening my brother brought a box of old family photos down from the attic and we spent ages going through them - and I spent almost as long sending picture messages of the least flattering ones of Baby Sister to Baby Sister. I discovered that, even as a child, I had a thing for hats: 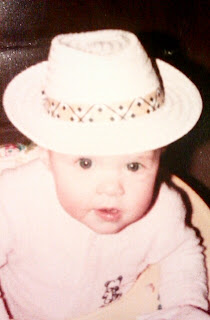 This is one of very many baby photos of me in hats. Of course, it may be less a matter of personal taste and more the case that my mum enjoys putting hats on small creatures that can't answer back: 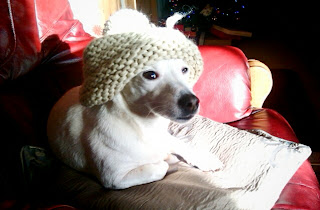 On our last day, I had to make a quick stop at the post office - due to acquiring a few more pairs of shoes (ahem) I ran out of room in my hand luggage and had to post all but one dress back to myself in Leamington. Hey, it worked out pretty well though because it was cheaper than checking a bag into the hold and I didn't have to carry them, and they arrived this morning. We had a bit of time before our flight, so stopped in for lunch at Little Wing pizza and had a dander around Belfast. It was really lovely and I was so, so sad to say goodbye to my parents at the airport. The holiday at home was just wonderful, and I feel relaxed and refreshed and ready for a busy 2012.

On that note, I've been thinking a little bit about resolutions. This is partly because I read lots of sewing blogs and have read lots of sewing resolutions (I'm not going to do the pun. I hate puns) and it got me thinking about what I want to achieve for 2012. There are a lot of things - not all sewing related, and not all easily articulated. I won't list them all here. I really enjoy participating in the online sewing community and although this blog isn't a sewing blog, I find it helpful and enjoyable to post about the things I have made. I'm inspired and motivated by my favourite sewing bloggers and I'm so much in awe of their output, particularly those like Roobeedoo, Scruffy Badger, and Jane, all of whom are endeavouring to create a wardrobe of their own handmade creations. I think that is so cool. I'm genuinely full of admiration for their dedication. But I've come to realise that I'm a dabbler, and that's cool too. I love sewing - it excites me and fulfils me, and I love wearing the things I've made. So I'm not going to make sewing resolutions. 2011 wasn't an especially productive year for me, sewing-wise. I had a few false starts and I have a few unfinished makes but I've always enjoyed the sewing. So I'm going to carry on as I have been and dabble - I'll sew when I feel like sewing, and sew the things I fancy sewing. Certainly, I want to learn new skills and I'm sure I will along the way. I want to try my hand at some of the beautiful patterns in the Colette handbook, and I'd definitely like to get the fit right on the Peony pattern. I'd like to sew something for Nic. I'm sure I'll do some of those things, if not all, and I'm looking forward to that. Something I will definitely do is to carry on being part of this wonderful community.

As I said in my previous post, 2011 was a really good year for me and Nic and I have lots of exciting things happening in 2012. I'm pretty psyched about the year ahead and I think that the best way to make it as good as and better than 2011 is to keep up the good work. Seriously. So for me, this means spending time creatively - sewing and knitting and crocheting, and reading and writing. It means going to the pub, going dancing, spending time with my friends. It means seeing as much as I can of my family and Nic's family. It means walks, and tasty food, and trips and adventures. It also means working hard, reading lots and learning. It's going to be an interesting year!

So, anyway. Yes. Nic and I got back fairly late yesterday evening and after switching the heating on and making about twelfty hot water bottles to try to take the chill out of the little flat, we settled in with dinner, a bottle of wine and the DVD of The Talented Mr Ripley. Nic is going to be writing about the film, and while I've read the books I'd never seen the film. It was enjoyable but holy shit, it was grim! I'd underestimated quite how much. Still - while I was missing my parents' house it was definitely good to be curled up on our little sofa once again.

This morning I was awoken by the postie bringing me my clothes, and a pair of shoes I bought last week in the Aspire sale. I have to say a quick word about Aspire at this point, and about their customer service in particular. It's excellent. I tweeted Aimee, who runs their website and twitter account (@aspirestyle) last week to say I had my eye on the shoes, but would have to wait until the following day to place an order. She made sure there were a pair in my size, and when I ordered them agreed to delay posting them until I was back in Leamington. She tweeted me yesterday to let me know she'd posted them and they arrived this morning. It might sound like a small thing, but it is really good to have such personal service and I've never experienced anything less than this from Aspire. And the shoes are super sweet!

Today has mostly been about dandering in town, running errands and enjoying the sunshine. Now, I'm usually a bit loath to save a pair of shoes on their first wear but, having acquired a number of new pairs recently and only having a month left on the Shoeper Shoe Challenge, it had to be done.

And for good measure, a wee close up of the shoes: 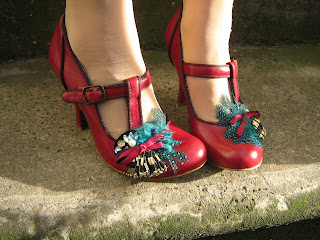 They're not as gaudy as the last pair of Irregular Choice shoes I bought but they do what I think Irregular Choice do so well, which is to bring a touch of gaudy to classic design. In this case it's the off-centre t-bar and the strange foliage, but I think the shape and feel of the shoes makes them wearable. In any case I adore them.

Now I must depart, because there is a glass of wine on the table with my name on it, and dumplings to be made. I shall be back anon.
Posted by Roisin Muldoon