Linda? But that's not how my name is pronounced!

It's Sunday again and I can't believe how quickly this week has sped past. I think it's because it's been such an excellent week, you see. I've had a very, very good work week but Nic had an even better work week. If you follow me on twitter (just like my blog but more swearing) you'll know that he had his PhD viva on Thursday and he passed, so he's Doctor Nic now! I won't get all soppy here and embarrass everyone but I couldn't be more proud. After four years of extremely hard work it was most deserved, and as such we've been spending the weekend celebrating. I decided not to go to London on Friday so when I got home on Thursday night we were able to go out for dinner and a few drinks, and it was just lovely: 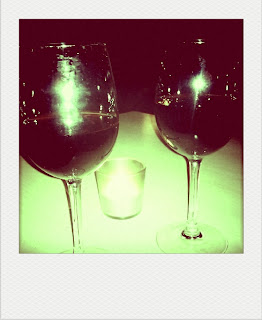 Two lovely glasses of vino tinto. I'd bought some champagne too, but house red was good enough for a school night

I was working in Coventry on Friday so was able to sleep until a decent hour and even come home early - my work computer randomly stopped working part way through the day and after a pub lunch with my colleagues I wasn't really doing that well on the concentration front. After an afternoon nap and an early dinner, Nic and I headed off to the Somerville to celebrate in earnest.We were joined by a good number of our dear friends, and it was a really great night. I love going to the pub and the really cool thing about the people we were out with was how well everyone mixed together. It was a late night.

On Saturday, Nic and I had planned to go to Banbury to have lunch in the Pinto Lounge. It was all going well when I woke up, I was hungover as all getout but functioning, and looking forward to Banbury. But it all went downhill after breakfast. And look, I know, it probably seems like I've been talking about boke a lot on the blog recently, but I boked BIG STYLE on Saturday morning. Not my finest hour, and I had to go back to bed for a long time. I felt better after that, but still. I suppose having the odd really horrible hangover is part of adult life. I dragged my sorry hungover ass out of bed in the early afternoon to try to catch some of the lovely winter sunshine, and to do a wee shoe save. 14th February is creeping up on us, after all...

I wanted something comfortable and slouchy to wear and the Emma dress fitted the bill perfectly. I love the colour of this dress and it has pockets, but without a belt it's very tentlike! The boots were a gift from my friend Lucy, who was having a clearout. She said they were comfortable enough for a night out dancing and I can totally believe it, and like my Harlot boots, they fit my birdy wee legs. WIN. 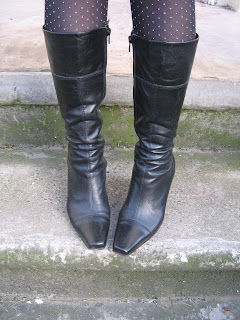 Cute boots. Thanks, Lucy!
Nic's hangover started to kick in later in the evening so instead of cracking open the champagne, as we'd planned, we went to bed really early to watch DVDs and eat ice cream. Sometimes it's the little things.

Poor Nic is suffering with a horrible cold so today has been very quiet too. I've been tidying up the flat and doing a LOT of ironing, while poor little Nic has been cuddled up with a hot water bottle on the sofa. We did go out for some groceries and to go to the library earlier, and it was really nice to get out into the beautiful, frosty day.

The last time I wore my Peony, I accessorised it with yellow. Today I wanted to go for bright blue, because this cardigan matches perfectly with the blue flowers in the fabric and the vintage bias tape I used to hem the skirt and the sleeves: 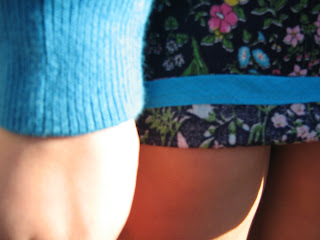 Matchy matchy? Me? Yes. Okay, I am.
The shoes aren't an exact match, but what can a girl do? They're blue, at any rate: 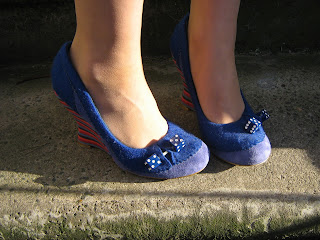 Wearing the Peony was part of a plan to spur me into doing some sewing this week. I'm feeling the notion, but not necessarily the motivation just now, but Lysy and I have a sewing date at the weekend and it might be just the time to attempt something from the Colette handbook, or maybe to get the fit right on a second Peony. I'll see where the mood takes me as the week progresses.

Tonight the plan is to have delicious (hopefully) vegetarian lasagne for dinner, and to watch Sherlock on the iplayer, and to get ready for what is going to be another very busy week. So with that I'm off. Good night, my lovelies x
Posted by Roisin Muldoon