Your bodyguard's named Cindy? What's the matter, they all out of Tiffanys?

Happy weekend everyone! I hope you're all having a super Saturday. It's all good here in Clackett Mansions - Nic and I have some friends coming over later so we have a wee bit of tidying to do. But in the meantime we're doing precisely nothing, which is great.

I had another reasonably sucky work week, but it was made slightly more bearable for having been able to book Friday and Monday off as flexi leave. I met Nic and Paul in the pub on Thursday afternoon for a wee end-of-week drink to get into the right frame of mind for the weekend, which was great. We snuggled up in the flat to await the great snowfall... which turned out to be a mere dusting. That suited me, picturesque without being inconvenient, you know? It was particularly good that it didn't snow very heavily as we had plans to spend Saturday in London and the last time we went to London in the snow, getting home was really unpleasant. Anyway - it was sunny and cold and not especially snowy when we got up, so off to London we went. The plan for the day included lunch with JP and Han, a visit to the Fever shop to look at a dress my mum has her eye on for my sister's wedding, and birthday drinks with Mr S at Old Street.

First stop, however, was The Archive Bookstore in Marylebone. Nic had read about this secondhand bookshop earlier in the week and it did not disappoint. I love secondhand bookshops, and this was just the kind of ramshackle, dusty and eccentric shop that both Nic and I enjoy poking around in. I found a little gift for a friend, and Nic picked up a few bits and pieces as well: 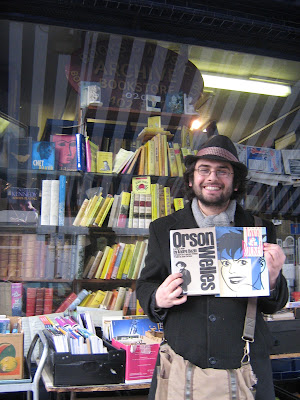 The stripes on the window aren't as a result of some weird camera thing - just the reflection of the striped awning! It was bitterly cold, but bright and clear. We had some time before meeting JP and Han at Trafalgar Square, so decided to wander down from Marylebone and take in some of the sights. Being tourists, basically!

Emily and Fin Lizzie dress, Fever Fez chiffon bolero and Vivienne Westwood for Melissa Ultragirl Cameo shoes - I put my coat, hat and scarf on back bloody quickly after this photo was taken!

The walk was very picturesque, taking us down through Grosvenor Square, Old Bond Street and Piccadilly to Trafalgar Square. I particularly enjoyed Grosvenor Square, and the grandeur of Canada House set against the 70s ugliness of the American Embassy: 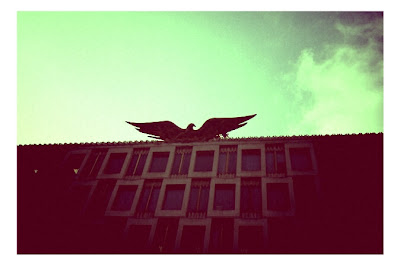 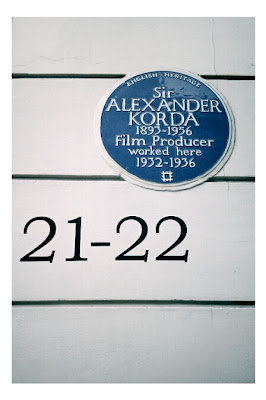 I love spotting blue plaques, and this one on Grosvenor Street was particularly pleasing to two film students

After an astoundingly enormous lunch in The Two Chairmen, we said goodbye to JP and Han and went for a poke around the bookshops and comic shops on the Charing Cross Road and in Soho, a dander through Chinatown and a quick visit to the Fever shop: 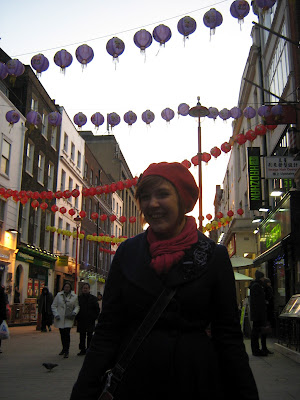 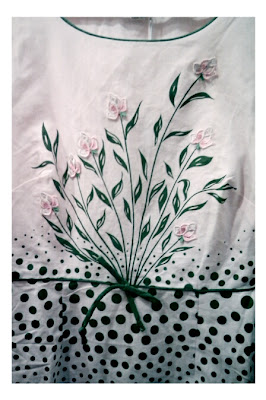 Despite the TFL journey planner's claims that it would take nearly two hours to get from the West End to Old Street, we found our way there in about twenty minutes to settle into The Reliance to celebrate with Mr S and his beautiful fiancee. As we had to catch the train back up to Leamington, we could only stay for a few hours but it was most pleasant to spend the evening with old friends, and making new friends. Mr S and Vic had an awesome gift for me and Nic - this: 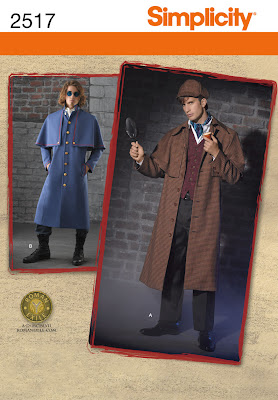 The pattern includes a deerstalker pattern, how excellent is that? I'm honestly not sure when I'll get around to making this, but I have been wanting to make something for Nic for a while, and this ticks a lot of boxes!

We got back to Leamington late and went straight to bed (after being chilled on an inexplicably air conditioned train - it was -5 outside, so obviously the air conditioning needed to be on? WTF?) and slept deliciously late this morning. As I said, we have some friends coming round later so headed out into the sunshine to get some groceries. Thankfully, it isn't as horribly cold as it was yesterday in London and the dander through town was very enjoyable:

Obviously it wasn't warm enough to go without a cardigan and coat, but I feel a bit like it's been all cardigans all the time on the blog recently. I mean, that's because it's WINTER, but I am majorly tired of it being winter. I know spring is on its way, so I'm trying not to complain too much, but still. All I can think about is summer dresses and bare legs and wine in the park on sunny afternoons. Sigh. Anyway. If further proof was needed about how hard I've fallen off the Shoe Challenge wagon, here's a wee shot of my Amazonas... 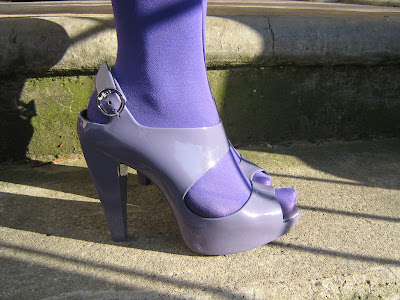 I've fancied the Amazonas ever since I saw them on Veronica Darling last year. They're really tall! Not uncomfortable, though, and they have a platform that doesn't roll. They were very reduced in Author shoes. All good!

Right. There's some tidying to do and some food to prepare. Laterz.
Posted by Roisin Muldoon