Breakfast is the most important meal of the day, and I proved it in 1973.

Yo YO. I've left it rather longer than I meant to, this blogging lark. Since the weather turned so cold and miserable, I wasn't that keen to go back over my holiday photos, I suppose! Also I have been having a majorly lazy Easter weekend - Nic and I had planned to go to the coast to visit his folks but for various reasons couldn't, so I have had a hectic schedule of lazing around to be getting on with.

So, yes. When I last wrote I was telling you about our stay in Thurston House. We were staying there on Friday night and Saturday night, and we woke up on Sunday morning feeling quite sad about the prospect of leaving. After another delicious breakfast, we decided to go back to Lake Lily Park to feed the turtles and to check out the farmers' market that happens there every Sunday. The market was lovely - there was a woman playing guitar and all of the stalls set up in the sunshine gave the whole thing a festival feeling: 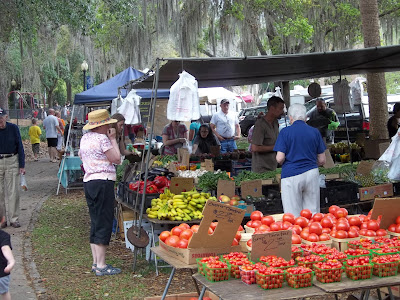 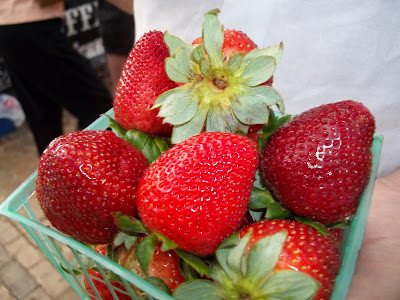 It was just at the end of strawberry season, and these were absolutely delicious. Eating these in the sunshine is a very happy memory!

As we stood on the boardwalk feeding the turtles a family approached us, asking me to take a photo of them- the couple got engaged on the boardwalk and they were taking their baby daughter there for the first time! They repaid the favour by getting one of me and Nic, which I think is the only proper one of the two of us together on our holiday: 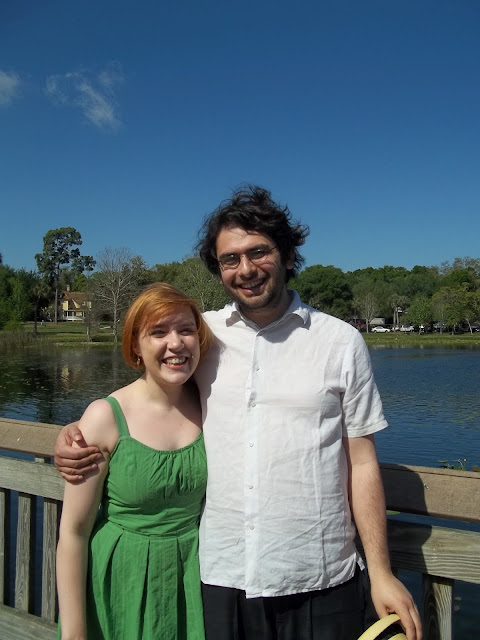 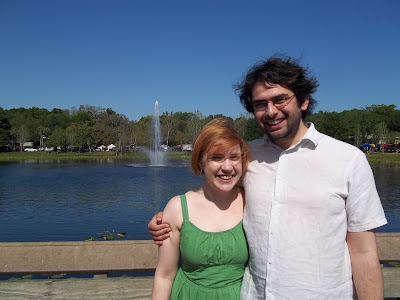 We stopped at one of the stalls and bought some cheesecake cupcakes (yes, you read that correctly) as a thankyou gift to Carole and Joe, before reluctantly heading back to Thurston House to check out. Joe very kindly took us back to Winter Park to the Best Western, and we spent the early part of the afternoon chilling out by the pool. Our room had been upgraded to a poolside room with a balcony for the final part of our stay, so after squealing a little bit at how lovely it was, we went back out into the sunshine to explore Winter Park Village. I did a little bit of shopping, and we went to our first proper American supermarket because we're cool like that. 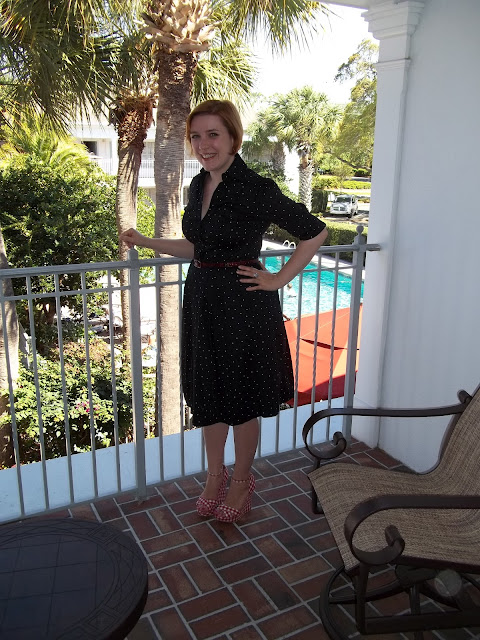 Trying on my new frock from White House Black Market... 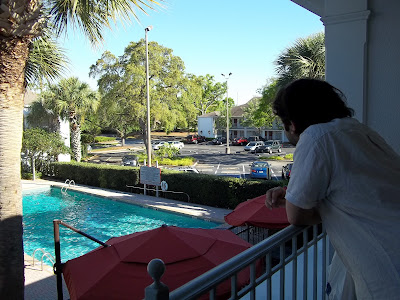 Hanging on the balcony

Earlier in the day, I had slipped over and muddied my dress (messing about by the side of the lake) so, as I was getting changed anyway, Nic and I decided to get a wee bit dressed up and head into Winter Park to see what was happening on Sunday evening. 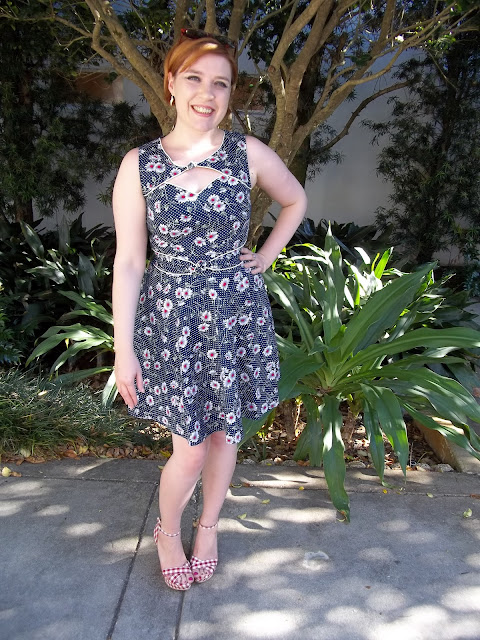 So, it turns out nothing was happening in Winter Park on Sunday evening! Well, apart from some fool busker wailing outside a restaurant on Park Avenue. Sigh. Still, it was lovely to have a walk in the dusk, and we decided to cut our losses and go back and watch the Mad Men season premiere in our hotel room. Well, after we had black bean burritos on our balcony - YUM! 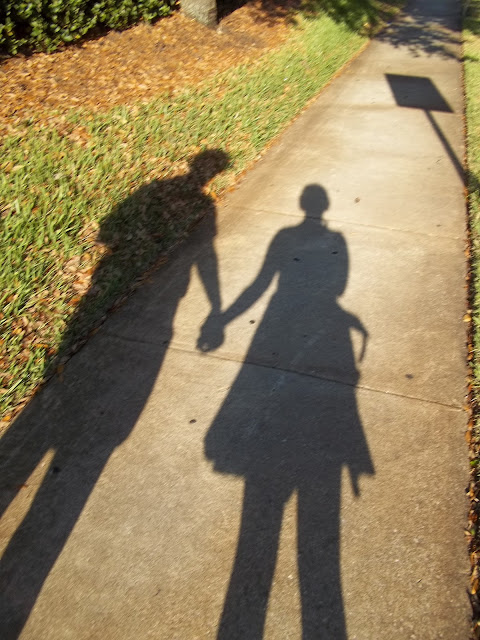 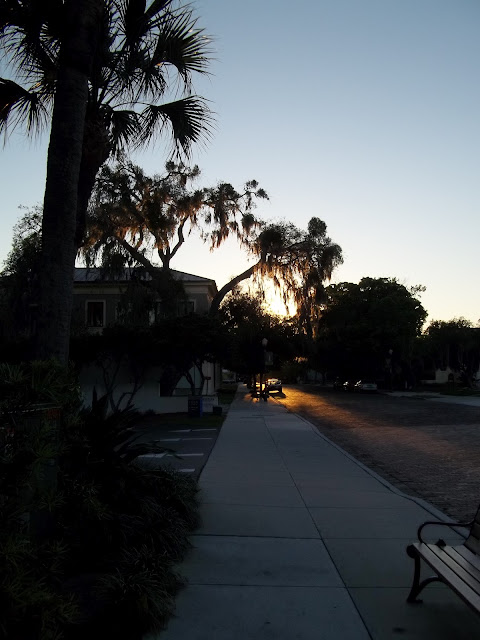 I was happy to be able to watch Mad Men, especially as we don't have ordinary TV (far less Sky Atlantic) at home, so I knew it would be my only chance to watch it before it comes out on DVD, but watching it with constant ad breaks kind of wrecked my head!

Monday was our last full day in Florida and I was torn between wanting to do loads and wanting to just enjoy relaxing - particularly as I knew the flight home would be difficult. So laziness won out. Nic and I had a dip in the pool before breakfast and then spent most of the morning on the balcony reading: 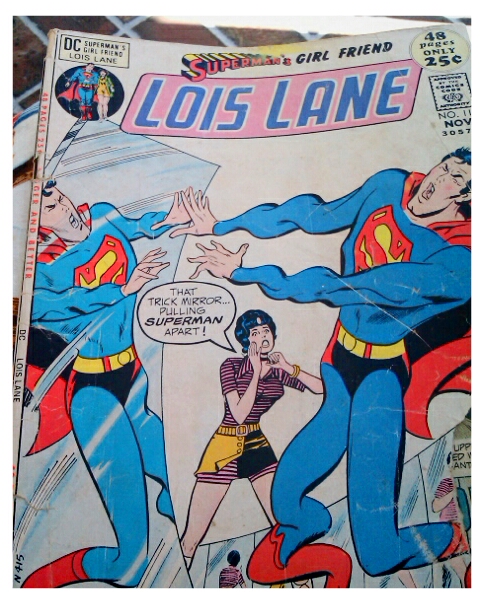 The afternoon saw us ready for adventure so we decided to go to Orange Avenue to check out a comic shop and a vintage shop that Julian had recommended to us. This involved taking a bus and again, my nerdy side came out in full force because I was excited to see how public transport works in Orlando. I know, I am such a loser. Sadly, the comic shop was closed and the vintage shop was not all that, and the bus we got on to take us back broke down after about 100 yards. Still, it broke down outside the White Wolf Cafe and, as reader Jill used to work there, we decided to go in for a coffee. It was awesome, and went straight to the top of the list of places I definitely would go back to Orlando for: 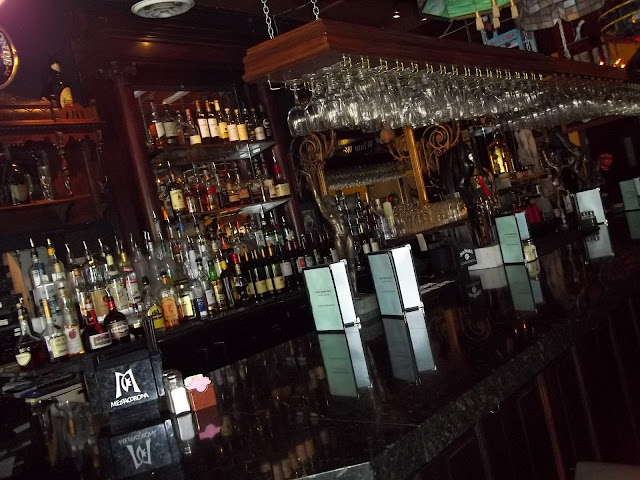 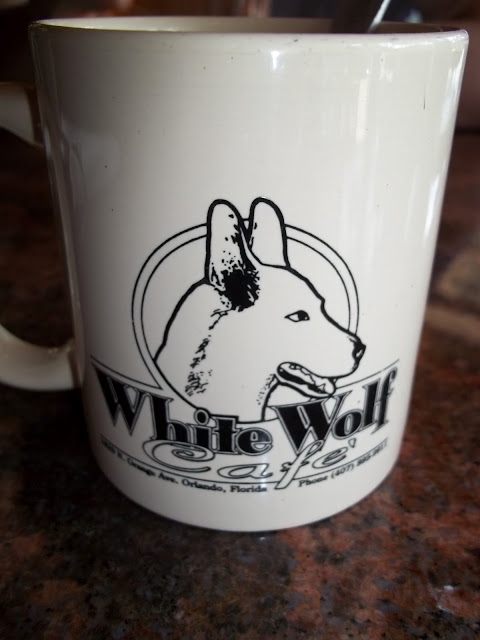 We had just a light snack and some coffee, but it was a really enjoyable place just to while away some time. The owners buy and sell antiques and the bar is full of Tiffany glass. They have live jazz nights and, much like the Milk Bar we'd visited earlier in the week, the White Wolf had a really laid-back and bohemian vibe to it that I really enjoyed. If you're in the Orlando area I can recommend a visit - why not pick up some records in Rock and Roll Heaven across the road, then stop into the White Wolf Cafe to look them over.

We had only a short amount of time when we got back to get ready for dinner. Julian was taking us to Paxia in College Park for some Mexican food and tequila-based drinks. Paxia was very, very cool. The food was delicious - including the strange-sounding but amazing-tasting tortilla ice-cream we had for dessert. It was also two for one on Margaritas, so I had my first (two) of those. Julian took us for a little spin around after dinner, with the hope of catching another comic shop on late night opening (sadly it was closed) and I was genuinely really sad to say goodbye to him when he dropped us back at the hotel. He was an amazing host and I hope one day we can return the favour.

Our flight was in the afternoon on Tuesday so we had some time to have a leisurely breakfast and soak up our last Florida sunshine: 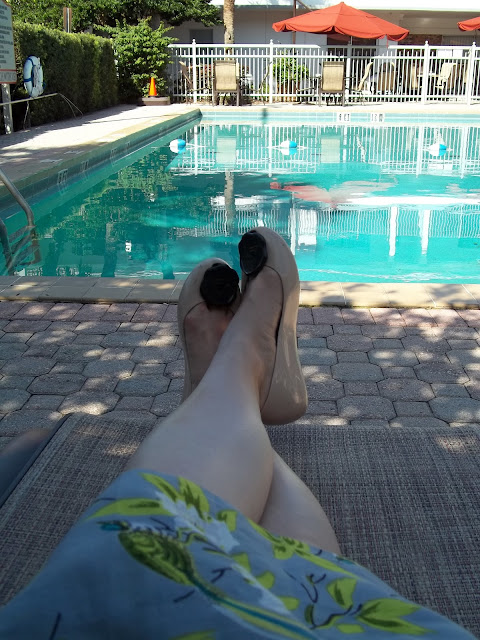 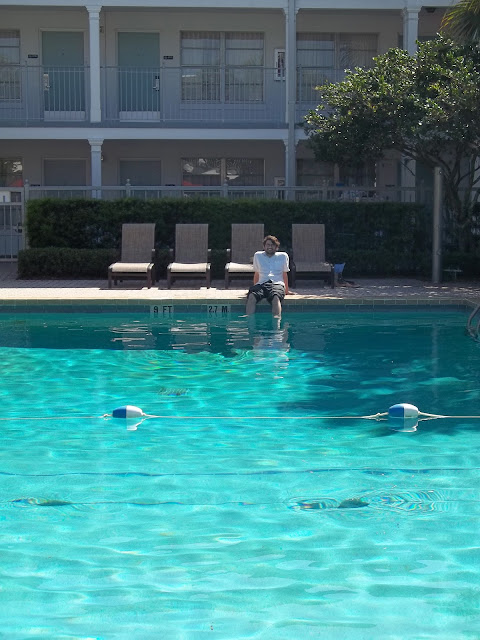 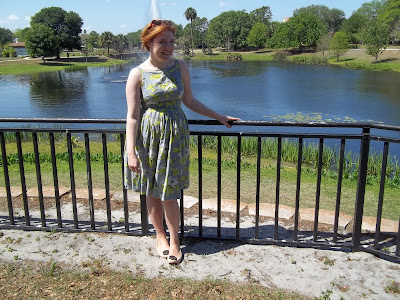 Making the most of the lovely lake behind our hotel

Then, sadly, it was time to go to the airport. Seeing as we never made it to the Kennedy Space Centre, I had my photograph taken with a large plastic astronaut: 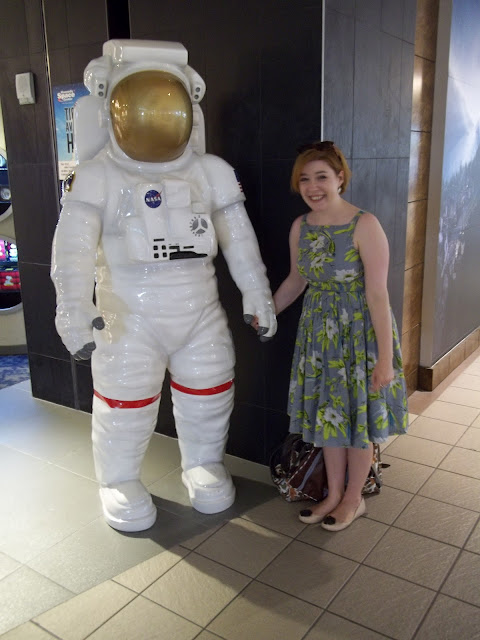 To balance things up, Nic had his photo taken with Spiderman: 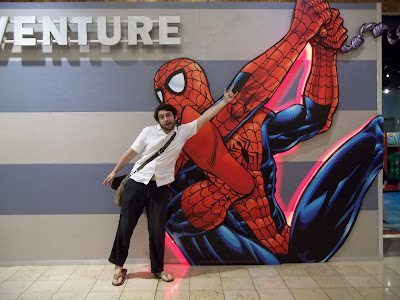 I won't bore you with the details of our flight and return to Leamington except to say that JFK airport in New York is a shithole - we had a 2 hour layover there and at nine o'clock at night everywhere except the duty free (where I bought some Prada Amber perfume - yay!) and Dunkin Donuts was closed. AND DUNKIN DONUTS HAD RUN OUT OF DONUTS. So, whatever, New York. You can make it up to me later. I fell asleep on the plane to My Week With Marilyn - turns out it's the perfect film to doze off to, not because it's boring but because it's gentle - and before we knew it we'd landed in the sunshine in Heathrow. It cost us about a trillion pounds plus a kidney to get back up to Leamington and we were greeted at Leamington station by some shirtless guys (and I was all "put your shirts on, it's only, like 13 degrees, also PUT YOUR SHIRTS ON, YOU'RE IN PUBLIC", but in my head) and then to bed. Our lovely, sunny, wonderful American adventure was over. I can't wait to go back.

So, that's it about my Florida holiday. I've not been doing much since we got back, but I have taken a few wee outfit shots and I've even been doing some actual sewing. 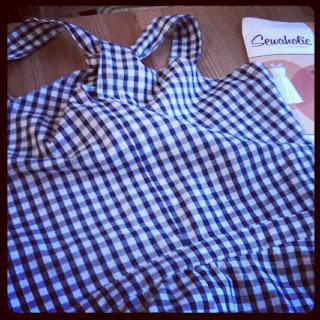 I'm just waiting for some warmer weather to show this off. Until then, my loves.
Posted by Roisin Muldoon