Ever since I sewed my first Sewaholic Lonsdale dress last year, I've been meaning to make another one. I wear my Lonsdale dress loads - it's really comfortable and so cute, so I thought it was high time to add another one to my wardrobe.

The fabric suggestions recommend not using stripes or plaids, presumably because matching them might be a more complicated proposition for cutting on the crosswise grain. I don't know. I do know that, as far as a a casual summer dress goes, my concern about fabric matching is minimal, and gingham = spring (even if the weather hasn't caught up with that yet) so gingham it was.

I picked up some poly gingham from my local fabric store for £4.99 a metre, which is cheap enough and while the quality isn't perfect, it's grand and it washed nicely. My only irritation was that I couldn't get it to press into crisp folds, but the upside of that is minimal wrinkling! So that's a win, really. Construction-wise, the Lonsdale comes together really nicely. This would be such a fun and satisfying project for a beginner because Tasia's instructions are so clear and the techniques are very intuitive. I particularly like her method of finishing the waistband inside the bodice and I have gone on to use it in other projects, most recently my Colette Hazel dress. 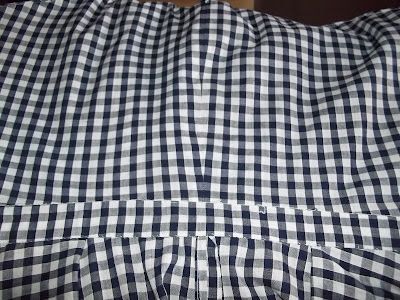 The only alteration I made to the pattern was to shorten the straps and to sew them down at the back. This is purely for practicality because I love the bow detail on the pattern and on my first Lonsdale, because it's so pretty. However, it does make getting dressed a two-man job. You need someone to tie the bow. I mean, it's physically possible to tie it yourself, but if you do that it looks like you tied it yourself. Also, it's killer on the arms. Trust me, I've done it. I'm a fussy so and so too, so every time I've worn it poor old Nic has had to retie it two or three times (at the very least) before it met my approval. In addition, in our climate being able to wear a cardigan is pretty important. I'd sew the bow again, but this time I decided to give it a swerve: 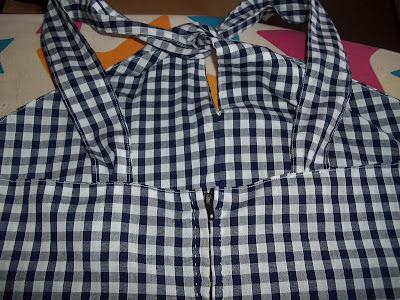 Stitched-down straps, and the top of my hand-picked zipper

I'm going to stop teasing you now and show the whole dress. I sewed this up on the rainy Saturday of the Easter weekend but it was just too cold to wear it straightaway. The sun peeped its head out for a few hours on Sunday past so I grabbed the opportunity to wear it and ran with it: 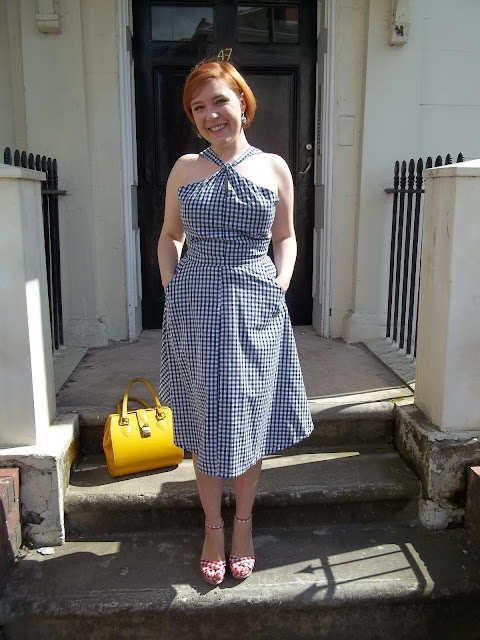 Worn with Charlotte Russe Madison wedges... I couldn't resist the double gingham. Look into your heart and tell me you would have been stronger. I KNEW IT.

Now, as I said above, I didn't bother to try to match the gingham up, so it doesn't match. I think it looks good all the same, though, so I don't care. The only thing that bothers me ever so slightly about this version is that the gingham behaved differently enough to the cotton I worked with last time that the bodice fits slightly differently, hence the wrinkle between my bust and my waist. That being said, some ease in that area is no bad thing and it came in very handy after the enormous dinner I had on Sunday night with Nic, Lysy and The Scientist. So, there's that.

I did take some photos of how the dress looks with a cardigan but the wind was messing with my hair, so my derp face is too distracting in them. You'll just have to imagine it. So here's a picture of the back view instead: 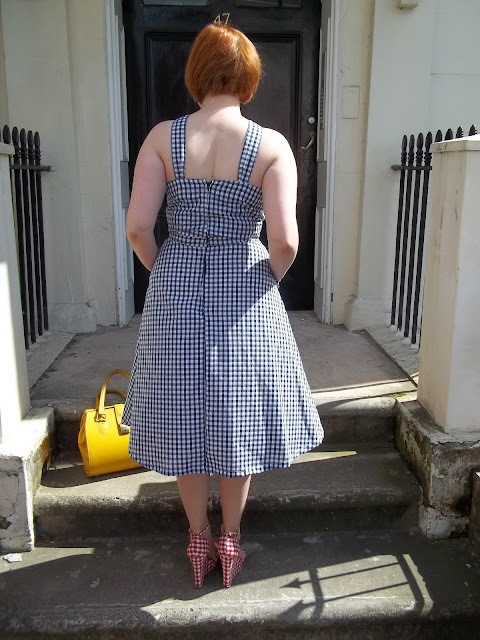 I didn't think it was possible to have a derp back, but apparently it is! The straps are good though, yes? But I probably need to take some length off the bodice if I make this again in a similar fabric. As I said above, the extra ease comes in handy and most of the time in this crappy weather I'm likely to be wearing a cardigan over this.

As the bodice is self lined, this dress has only a few seams that need to be finished. I opted to finish them in my favourite way, by turning and stitching them: 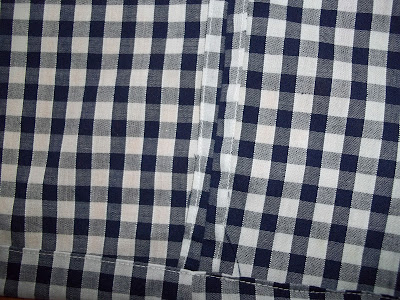 It's quick and easy and neat, and you can read some advice on how to do this in Tasia's post here, if you like.

I sewed this up in one rainy Saturday afternoon. No messing around, no stress. This is another happy dress. I see Tasia has a few new patterns in the pipeline, I'm really looking forward to seeing what she comes up with next.

One last photo and then I'm off. I need to be drinking a wee glass of wine and watching some Made in Chelsea. This long-ass-week is taking it out of me, but lookit how happy and gingham-y I was on Sunday: 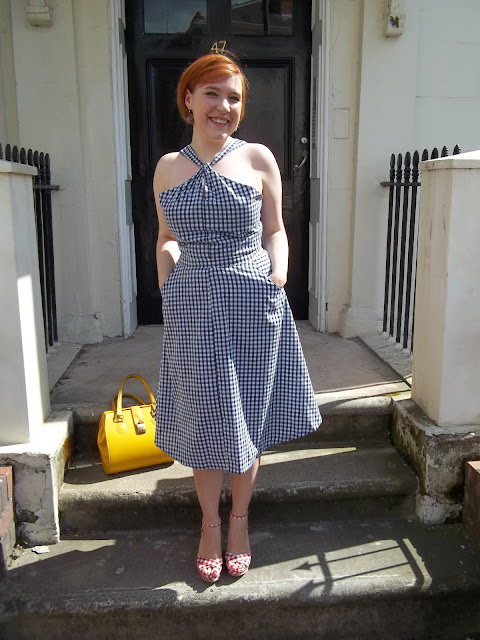 Oh yeah, like you wouldn't do the same damn thing?!