Good god, Hank. You look like the fella that killed the other fella! Me Made May outfits 13 and 14

Yo YO, my friends. Not melted yet, I hope? Everything grand here in Clackett Towers, Nic and I are both feeling pleasantly roasted after a weekend in the sunshine, and I'm gearing myself up for having next week off work - hurrah! We're also nearing the end of Me Made May, and I'm sure the non-sewing contingent of my readers will be glad when I stop wittering about sewing. I am going to witter a bit here though because my last two me-mades are new (to me) patterns, so I am going to share my thoughts about them with you. I'm awesome like that, I know.

First up is what I wore on Saturday - my first crack at the beautiful Sewaholic Cambie pattern: 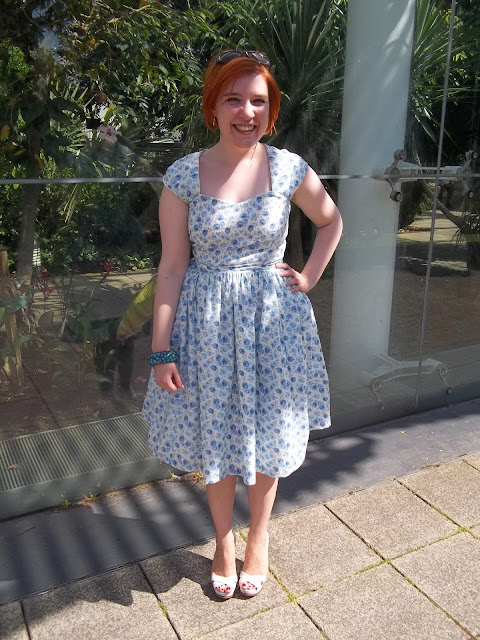 Me Made May 2012 outfit 14, Saturday 26th May - Sewaholic Cambie dress and Schuh Garda wedges

I'm going to take off the Pattern Review format here to keep my thoughts in order...

Fabric and notions: 3 metres of the fashion fabric, 1 Ikea bedsheet for lining, blue bias binding, a zip and some interfacing. I bought the zip and the fabric from Royal Fabrics in Leamington and I had everything else in my stash. Nic actually chose the fabric, possibly in the back of his mind he had Scruffy Badger's version which I had shown him earlier that week!

Any changes made to the pattern? None at all. I cut a size 8 and it's a good enough fit that I'll do the same for my next make - perhaps I'll bring the shoulder straps up a tiny bit, but this is an adjustment I have to make to most RTW clothes anyway.

Did the project go well? YES! Fabulously so. I loved sewing this dress, and the pattern is a gem. I sewed it in a slightly different order to that suggested in the instructions but this was just a minor thing - as the lining is essentially the same as the shell I sewed this as I went along - so all darts done at once, that kind of thing. I think I would have enjoyed the experience a bit less if I'd made the shell and then had to go back to the beginning for the lining. I had a horrible moment when the dress was finished of thinking that I'd messed up the pocket placement because they're so far forward - but, phew, they're meant to be! 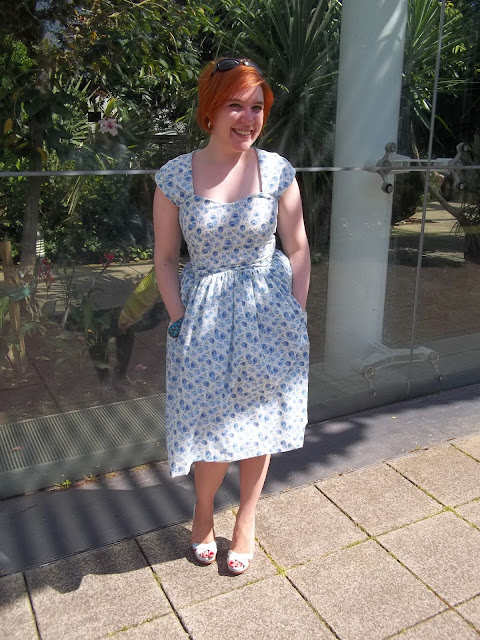 Cost: Around £30 including the pattern. It took around 7 hours, including cutting time.

Would I make it again? HELL YES. Try stopping me.

I wore the dress for a day of socialising and lazing in the park with Nic, and I can happily confirm that it's suitable for lolling around in. As I mentioned above, Nic chose the fabric and while it is a bit Laura Ashley chintzy I do like it. I think I'm a wee bit pale for so much white though so I think it will look better in the cooler weather, with a more vibrantly coloured cardigan. I wore it on Saturday with these fabulous wedges from Schuh: 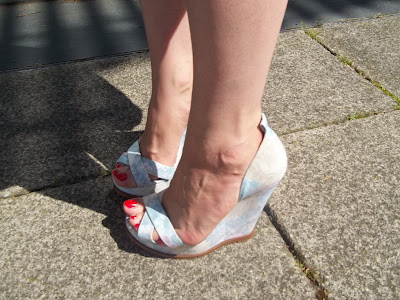 I bought these on ebay - it feels like years ago now, but it was only a few months - but the weather had been too miserable to wear them. I was really happy to get them out of their box! They have an ankle strap but I took it off, they were horrendously uncomfortable with it but a totally different matter without. Hurrah!

So... on to today and another newly-sewed garment: 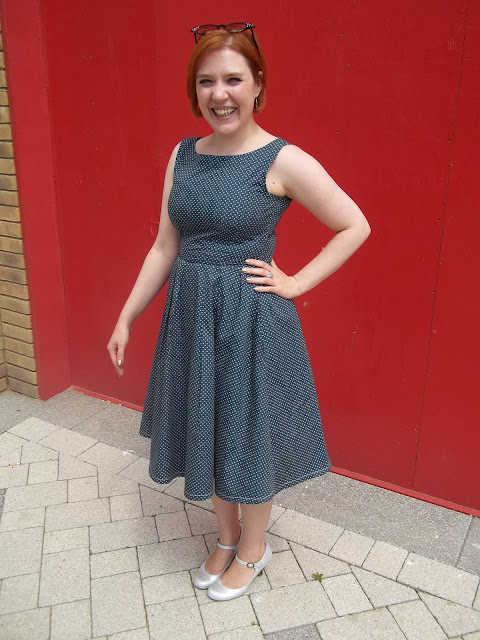 Fabric and notions: 3 metres of polka dot cotton, a zip and some bias binding and a wee bit of interfacing. Everything except the fabric was in the stash, and it came from Royal Fabrics again.

Any changes made to the pattern? Sort of, but very minor ones. I catch-stiched the armhole facing down, rather than having the stitching showing. I cut the skirt front on the fold, instead of having a centre front seam. I didn't see the point of that, and either way I was going to have to cut the skirt pieces on the crosswise grain. This had mixed blessings, really - no need to worry about matching the pattern, but it did make figuring out where to put the pleats a bit more complicated. I would do it again, though.

How did the project go? Pretty smoothly. This pattern has so much potential. I absolutely love the way the bodice is shaped with the horizontal darts. It could look really dramatic in the right fabric. The instructions were a bit irritating, especially those for the pleats but it all worked out fine. This is another one that I was able to sew up in a few hours - I'll probably be able to do it a bit quicker the next time.

Cost: Again, around £25 including the cost of the pattern.

Would I make it again? YES. I'm quite drawn to the idea of making the bodice and skirt in contrasting colours. 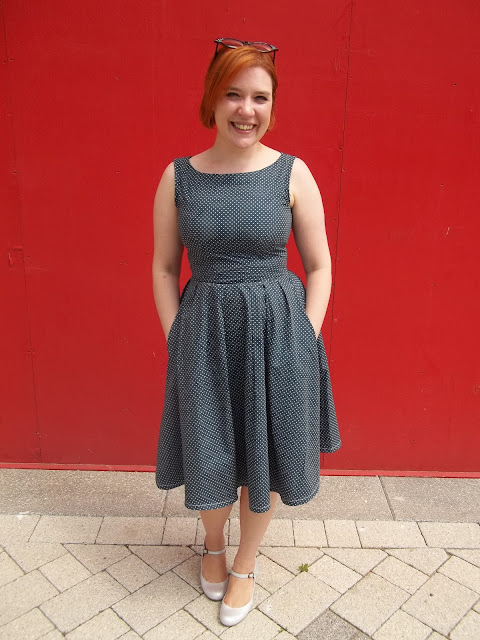 I wore this to work with these silver mary-jane shoes from Topshop via ebay. I was a bit worried I might be too warm in this dress, but I was very comfortable.

So, yeah. There are three days left of May and I have three dresses left... this has worked out pretty well!

Other than that it's all quiet here in Clackett Towers. The weekend was grand, and on Saturday I had the pleasure of meeting my Twitter friend V the Obscure, who was in Leamington for the weekend. She joined us in the park to catch the last of the sunshine. Once you get over the initial awkwardness of not knowing someone in real life, you quickly realise why you like them so much on Twitter. It was lots of fun! Nic and I don't have a garden, and Jephson Gardens has the advantage of having ice-cream on sale, and we don't have to do any gardening. 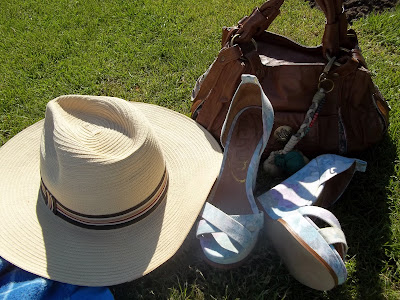 Accessories in the park

After a cup of tea, a shower and a snack, Nic and I headed out for the evening. We had two parties to attend, one of them being my dear Lauren's housewarming party. 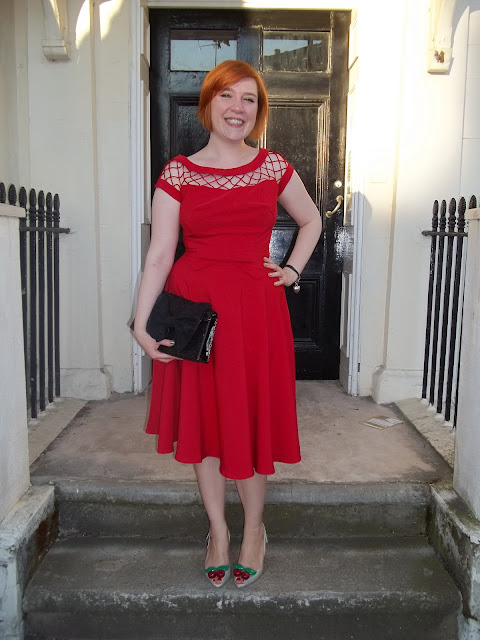 This dress also looks fab with a petticoat, but in this weather? NO THANKS. At Lauren's there was some Eurovision watching going on. Now I don't normally pay Eurovision much mind, but it was very enjoyable to watch it with a bunch of other quite incredulous people. Although I have to say, I was not feeling Sweden at all. The crazy Moldovan entry right at the very end had everything, I can't believe it didn't even place. WEAK, Europe. Weak.

Anyway, that's me for this evening. I've got dinner and a few episodes of Fringe to look forward to - see you all later in the week!