I've bet you've cried yourself to sleep many the night with this one. Shabba! - Me Made May - outfits 2 and 3

Afternoon all, and happy bank holiday weekend! We've even had a few hours of sunshine here in Leamington. It's still bloody freezing, like, but still. It's nice to be reminded that there is such a thing as sunshine.

I had a fairly irritating week at work, and I was meant to be working in London on Friday to go to a meeting. The meeting was cancelled on Thursday morning, which meant that I could work from home yesterday. This was good for many reasons, chief among them being that I could have a wee sleep in, good coffee at breakfast and could spend the day with Nic. Hurrah! On a day when you're working from home, it's good to wear something comfortable... 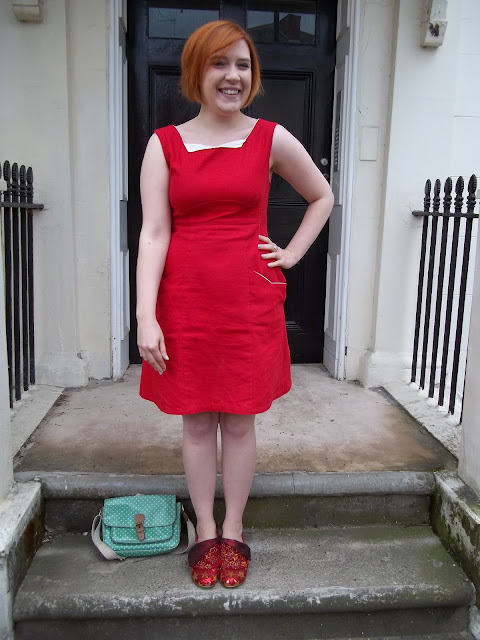 This Rooibos was among the first dresses I sewed and it has held up remarkably well. It's a bit wrinkled here after a day of working, but I love the fit. I'd ideally like it to be a little longer, but it did make me feel happy to put this on and like it so much - it's good to know that I can still enjoy wearing older makes. I love the Rooibos pattern, it's a lot of fun to sew and so versatile. As the dress itself is quite plain, I opted to bling it up with these fabulous shoes: 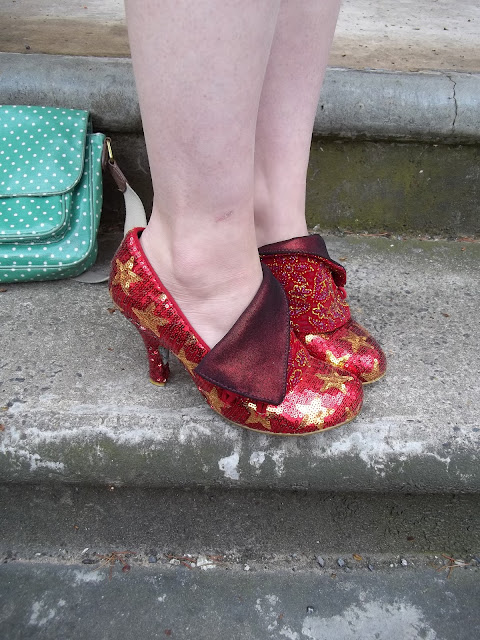 You can't go wrong with a pair of red sequined shoes. Which is why I have two pairs. I love these shoes for many reasons and one of them was the pure comedy reaction that my mum had to them. She didn't know whether to be fascinated or disgusted by them, which is generally the reaction they get.

Nic and I had a lovely quiet Friday evening of enchiladas, The X-Files and, for me, sewing. I got going on my first Me Made May pledge garment - a Simplicity 2591, which I finished this morning. It's nice to have a challenge to motivate me to sew, I must say.

I hadn't planned to wear a me-made outfit today because I'd had my two for this week. However, when I was hanging up clothes this morning and deciding what to wear I spotted a dress I'd made but never worn: 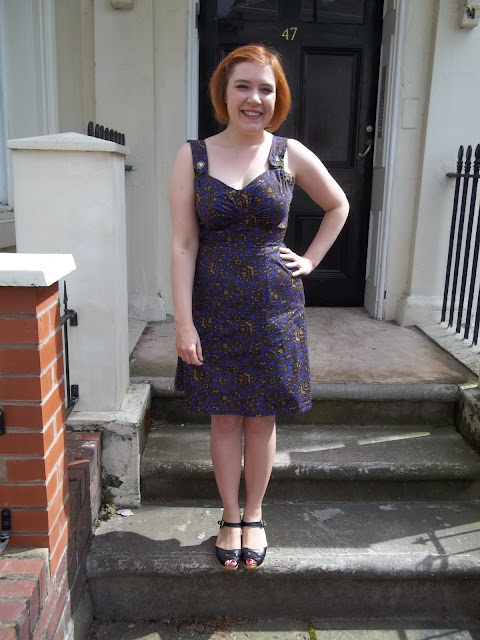 A Parfait! I made this last spring, from this gorgeous fabric I bought in Paris. Like the cotton for my Cod Afrique Hazel dress, this came from Dreyfus in the Marche St Pierre and was only a few euros a metre. 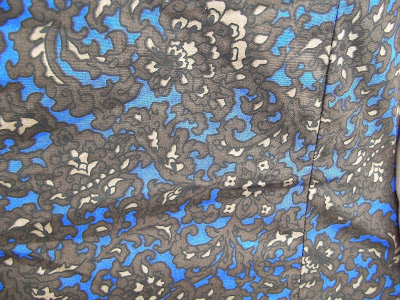 This was my second dab at the Parfait, after attempting it in a hideously cheap impulse-bought purple polycotton from Hobbycraft. So I think my feelings about this dress were tainted by the stress of the first go. I went on to make one for my friend Lucy, and then another one for myself and I did come to appreciate the Parfait pattern so I can't honestly say why I never wore this one. The fit is a wee bit off, I think - if I made it again, I'd make it with more ease! It's a comfortable fit, but I think it would flatter more if it was a bit looser. Also, a bit longer. Still though, it is a gorgeous pattern and I'd certainly make it again.

Although the sun made a brief appearance, it wasn't warm enough to get away with just a dress so I wore this extremly wrinkly purple cardigan from Warehouse: 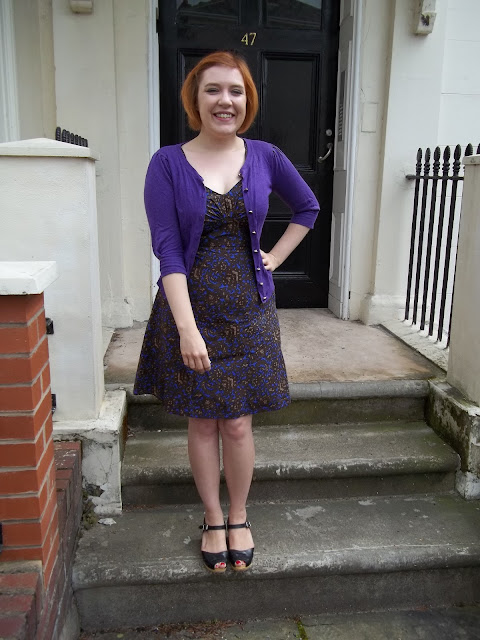 I'm also in the process of breaking in these Swedish Hasbeen Toffel clogs, which came from ebay. I'm sure they'll be very practical in the summer, and the black is very cute, but I would love the pink ones. 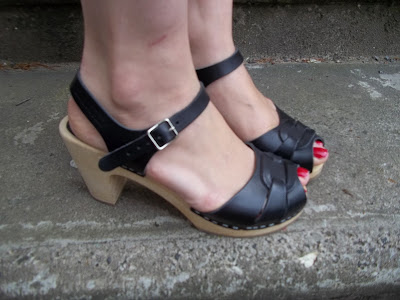 I confess, though. When the sky inevitably clouded over, I swapped these for some of my ultragirl shoes. I didn't especially want wet toes!

It's been a quiet enough day - I had my hair cut this afternoon, picked up a few sewing bits from the fabric shop, and then went wedding dress shopping with a friend who recently got engaged. That was a lovely, if slightly surreal experience. It seems wedding dress fashions really haven't moved on much since the 80s. There were a lot of dresses that would have looked fabulous on Melanie Griffith in Working Girl. Which, while I love that film, is not really a compliment. My friend did find her perfect dress, though, and it was NOT one of the 80s monstrosities! So that was excellent. We followed up with a glass of wine and a debrief with the boys, and now it's film night in Clackett Towers. So, until later my dears. Goodnight!