Evening all! My right eyebrow has started twitching again and I'm in my pyjamas. I'm pretty tired, but in good spirits all the same. This is nothing that a cup of tea and an early night can't cure, though!

Thanks to all of you lovely readers who gave me suggestions of places to visit in Liverpool. I have to confess, I was pretty well out-Henned and I came home early. But I plan to visit Liverpool again soon and will follow those suggestions.

So, yeah, Friday was pretty much the worst day I've had at work for months, so I was ridiculously glad to leave at four and take the train up to Liverpool. Kelly and her friends met me at Lime Street, we went back to our apartment and got changed, and headed out. Colleen had bought a costume for Kelly - Little Bo Peep - and once we'd got her into that it was time for dinner: 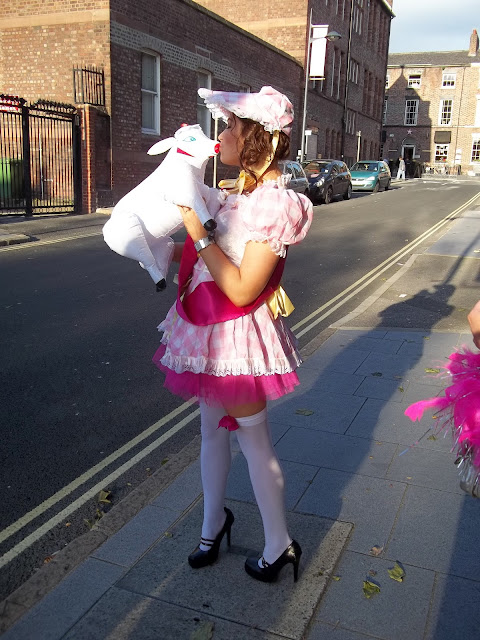 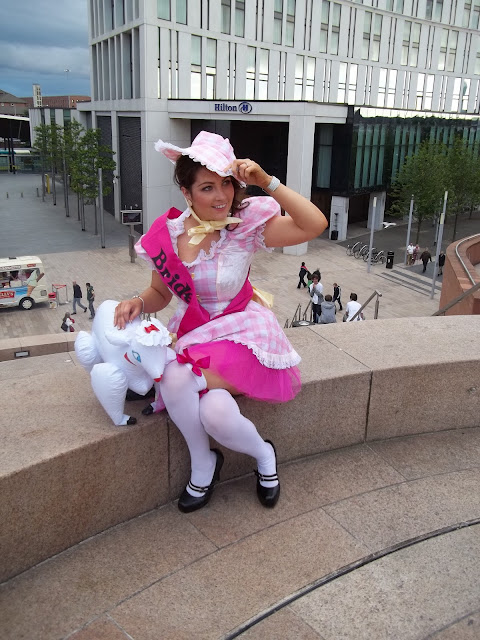 The bride to be, looking disgustingly gorgeous even in her ridiculous costume.

The rest of the hens were in black, with pink cowboy hats and feather boas.... 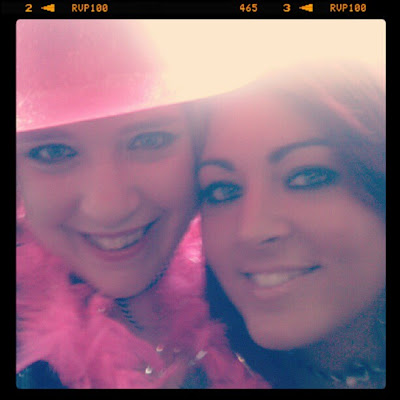 Colleen had booked us a table at Red Hot in Liverpool One. The food was very good and I was really happy to have the opportunity to get to know Kelly's friend Y a bit better as we were sitting together. Liverpool One is an impressive complex and I loved the view from up there at dusk: 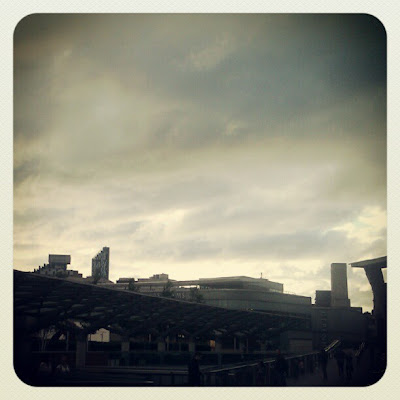 After dinner it was time to hit some bars. Once we'd had a few group photos, I lost the pink cowboy hat and feather boa... 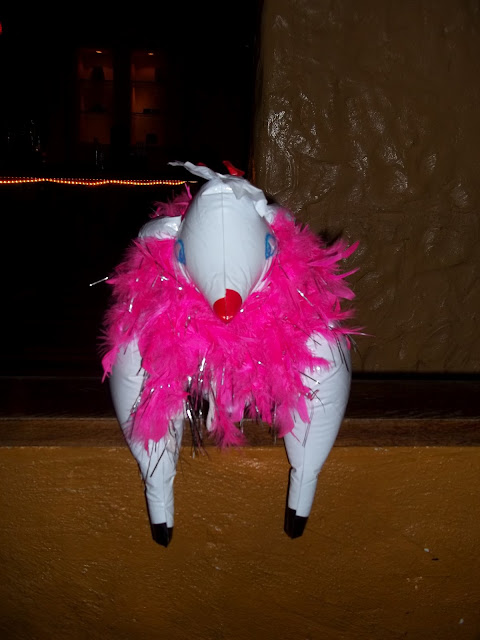 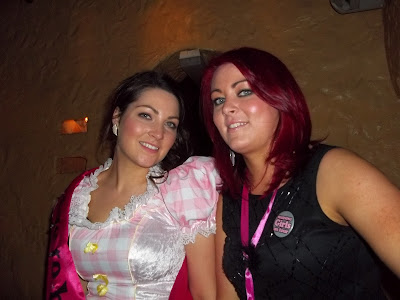 After a few drinks in Camel Club, the other hens decided it was time to move on and we walked up to Concert Square. This was where the hen party experience went from reasonably enjoyable to never again for me, I have to admit, as we went into one of the skankiest bars I've ever had the misfortune to visit, Ruby Sky. It was so disgusting! It smelled of piss, and the floors were wet... I can't say for certain it wasn't piss on the floors, and the dancefloor had poles. YUCK. Colleen wasn't keen either so she and I headed back to the apartment with Y, and left the other hens to it. They didn't get back until 6 the following morning! Now, I enjoy a drink and all but this isn't so much my idea of fun, so when I woke up on Saturday morning I started to think about leaving early. My decision was made when, after breakfast one of the other hens boked in BHS, on the street outside Burger King and in Burger King. I thought to myself, "I can't go out with these girls tonight, I'm too old to want to boke in the street!"  So, I did a little shopping with my sisters, had a wee explore to myself around Liverpool city centre, and caught the train back home to Leamington. Hen parties, it turns out, are not my bag. The other hens had a brilliant time, even O, The Burger King Boker. Most importantly, my sisters really enjoyed themselves too.

Boke aside, I totally fell in love with Liverpool. What a beautiful city! I only wish I could have seen more of it, and I can't wait to go back. I was staying on South Hunter Street, around the corner from both St Luke's and Liverpool Metropolitan Cathedral. Seeing the latter made me gasp with happiness - I am a child of the 80s, after all, so it was familiar to me from the title sequence of Brookside! 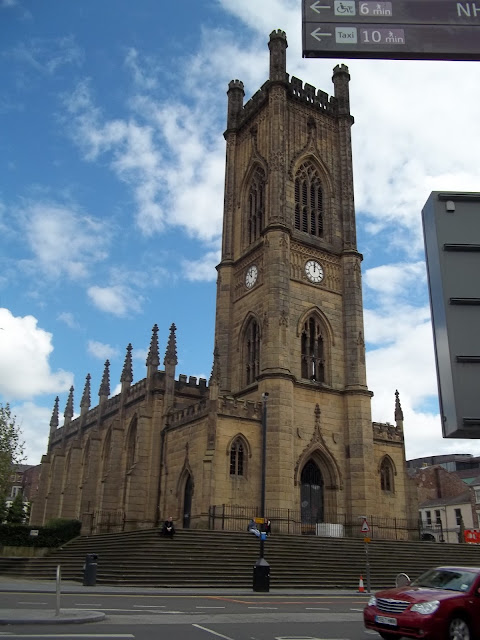 Liverpool St Luke's from the top of Bold Street 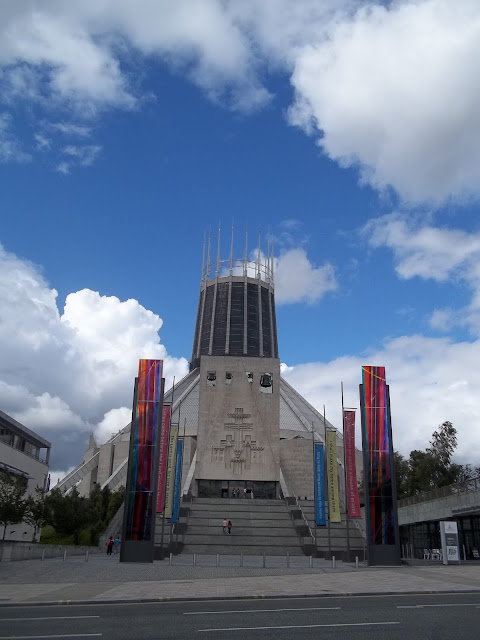 It's funny really, I'm an atheist but visiting churches and cathedrals is something I really love to do. Seeing both of these beautiful buildings was one of the highlights of my stay.

I didn't take lots of photos because I was busy just taking the city in. Maybe it's a cliched thing to say about Liverpool but I was staggered by how friendly and welcoming the people were, and how at home I felt there. Seriously, this might be connected with the fact that I grew up watching Brookside and that I read and reread Helen Forrester's series of memoirs until they fell apart, Liverpool just felt so familar to me. 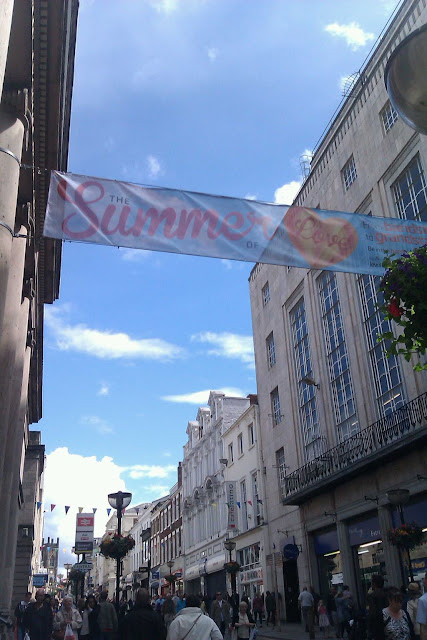 Bold Street in the sunshine 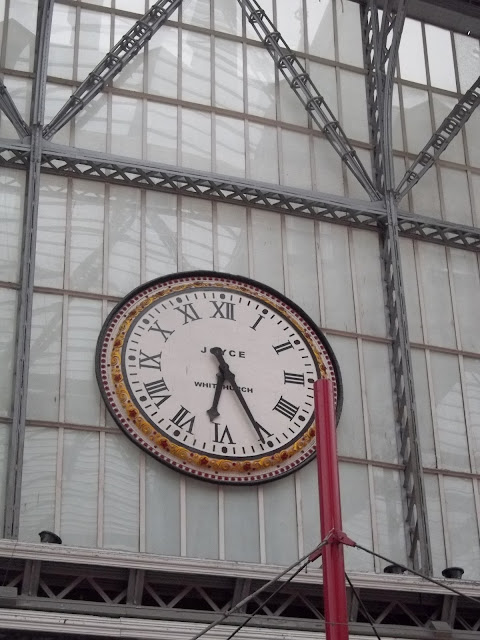 I was glad to get back to Leamington on Saturday night, and delighted to have a suddenly free Sunday. Nic and I had a very lazy day. We had a potter around town, lunch in Bread and Company, and we totally ignored the stupid Olympics Torch Relay before going to the pub with friends. A winning Sunday! 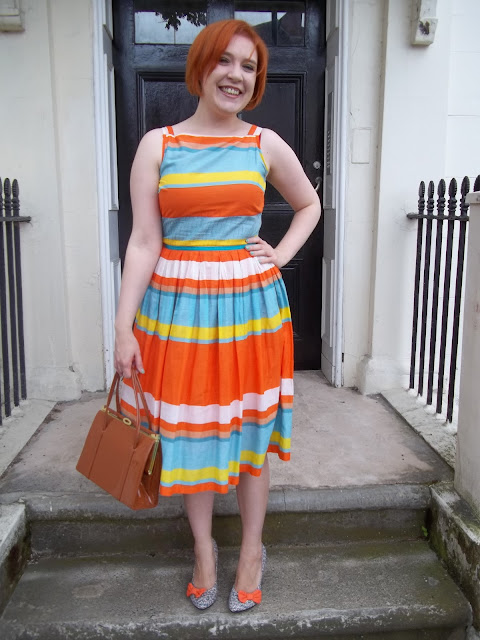 I bought these shoes in Liverpool. They're kind of ridiculously hideous, but I like the bow... 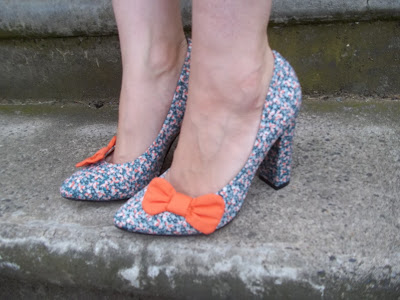 Anyway, I'm pretty tired now so I'm away to curl up on the sofa and watch a DVD. ROCK AND ROLL!

I am so, so lame. Goodnight! x
Posted by Roisin Muldoon