Imma call you back. I's snitting next to Borpo!

Greetings my dears. Good Sunday evening to you all! I'm uncharacteristically relaxed for a Sunday evening, having had a very fun long weekend. I took Friday off work, which was just what I needed after a really horrible week. Nic and I had planned to go over to Banbury but the thoroughly dismal weather made us rethink that plan and instead we went to the cinema to watch The Five Year Engagement. I should take Friday off work more often, because going to the lunchtime screening was basically having a private screening, there were only four other people in the cinema.

I wanted to like The Five Year Engagement, because I think the premise is really interesting - how do you make a relationship work when you're right for each other but need different things. And I did enjoy it when I was watching it, I think mainly because the cast was decent and the sets were beautiful, but it's proved to be one of those films that is a slow-burning disappointment. I can't escape the fact that the film is so blatant in its assertion that Violet's professional success is catastrophically emasculating for Tom, and when this becomes inescapable, the problem is resolved by her success becoming qualified by her sexual attractiveness to her boss, Winton. It also bothers me that although the film spends so long thinking about the problem of how to make Tom and Violet's relationship work, it doesn't even attempt to resolve this - just hopes the audience will be satisfied with a cutesy wedding at the end. All of that griping aside, I did really enjoy going to see a film that made me think and sometimes seeing a disappointing film is more enjoyable than seeing a good one! 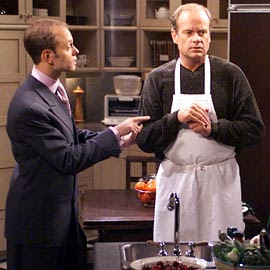 As my plans on Friday went no further than just relaxing with Nic, I wanted to wear something comfortable and cute so one of my May me-mades fit the bill perfectly: 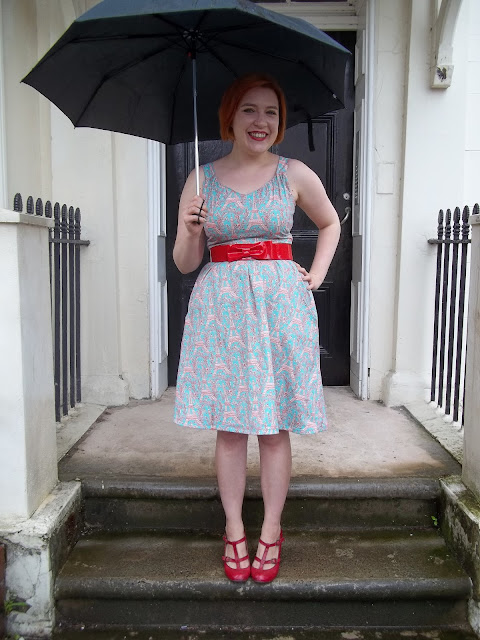 Simplicity 2591, charity shop bow belt, Topshop shoes and Nic's umbrella because I gave mine away to an old lady in Liverpool

I'm not sure how I feel about this dress with this belt, but I felt I needed to inject a bit more red into it and give the waist a bit of definition. In any case, it was just the outfit for relaxing, drinking gin and tonic and watching Farewell, My Lovely later that evening.

Saturday was much brighter so Nic and I decided to take our postponed trip to Banbury. The weather was changeable, but we had such a fantastic day. Banbury is quite small and, to be honest, it doesn't have a lot going on. That said, I'm really fond of the town - it's close enough to make a nice afternoon out and it has two things that Leamington doesn't have, a bookshop and a really cool cafe bar. 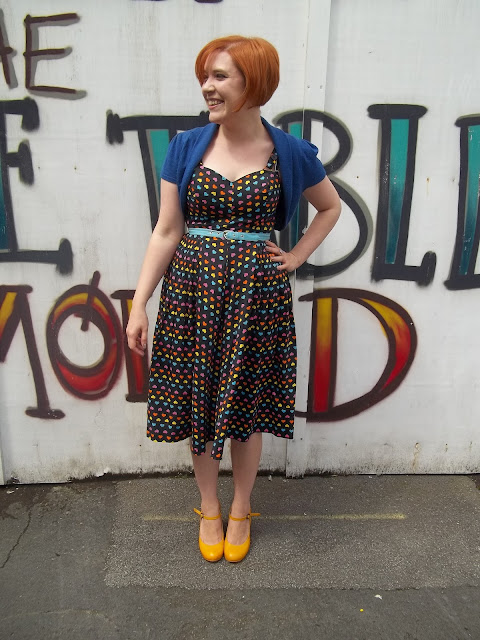 I don't have too much to say about this dress except that I love the shape of it, even if it does always irritate me slightly that the hearts don't line up at the seam on the bodice or the skirt. Still, I would have been too lazy to do any better myself so my criticisms are a bit halfhearted, there! Anyway, yes, we had quite the day in Banbury. We had a potter around the charity shops and visited the thoroughly excellent independent bookshop, Books and Ink: 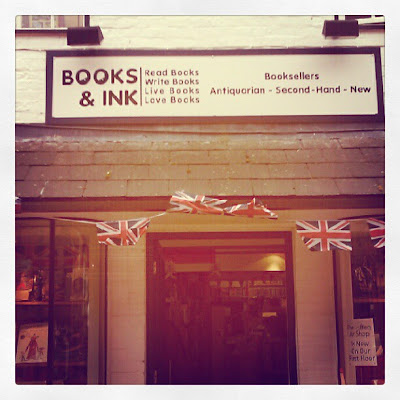 Books and Ink has an excellent selection of new books and secondhand and antiquarian books as well. It always makes me sad that Leamington doesn't have a proper bookshop, but I'm grateful that Books and Ink is there.

Almost opposite Books and Ink is my other reason for visiting Banbury - The Pinto Lounge. This bar is part of a chain, but it's marvellous and it makes these: 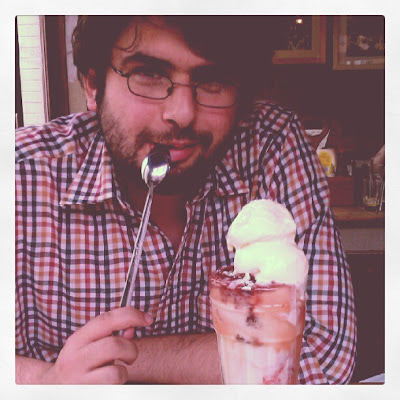 Nic, with our Knickerbocker Glory. YUM.

So, if you're in Banbury - Books and Ink, Pinto Lounge, okay?

I haven't done much today except watch a variety of different Batmans, hang out with Char and bitch about The Five Year Engagement while she bought all the jackets, and eat burritos. Yeah Sunday! 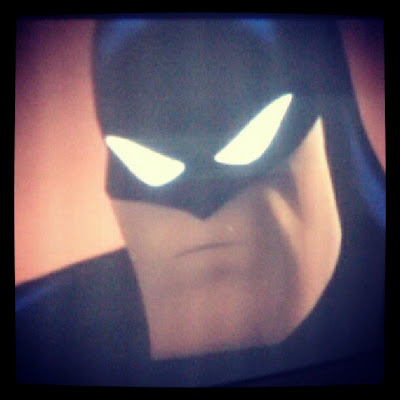 Batman The Animated Series. This is by far my favourite Batman. Nic is writing an article about the Christopher Nolan Batman films, and to ease the pain of having to watch them again (they're just so.... ponderous) it was good to watch fun animated Batman, and strange 1949 Batman... 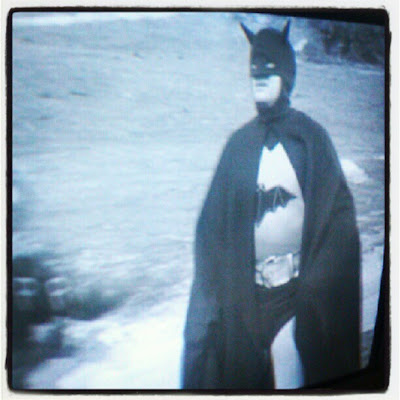 Look at this gormless Batman. LOOK AT HIS EARS!

This poor actor playing Batman couldn't even see out of the eyeholes of his cowl. He seems to spend most of the serial looking a bit confused. I still prefer this to Batman Begins and its tedious insistence on showing you how Bruce Wayne orders parts for his costume online from China for like, 15 minutes.

Anyhow, it was most excellent to experience some sunshine today in Leamington: 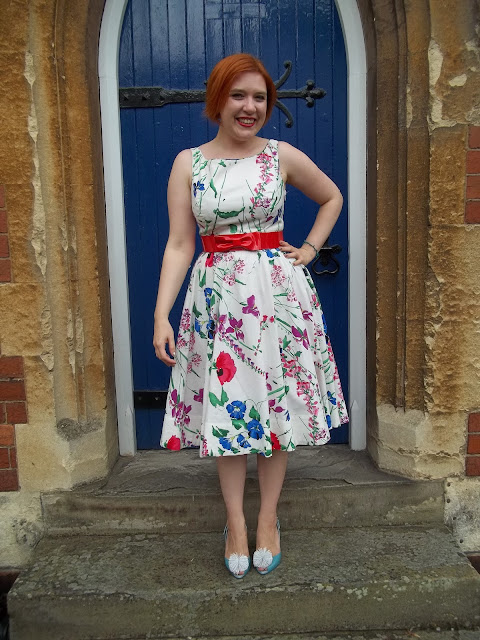 Actually it doesn't look that sunshiney in this photo but I promise it was! I need to do a little bit of alteration on the bodice of this dress. I got it cheap on ebay a few months ago because the zip was busted, but it's a wee shade big and it gapes a bit at the back and at the neckline. Still, the print is so pretty that I've been wearing it anyway. I was wearing different shoes earlier in the day but a few spots of rain in the afternoon persuaded me to change into slightly more waterproof shoes: 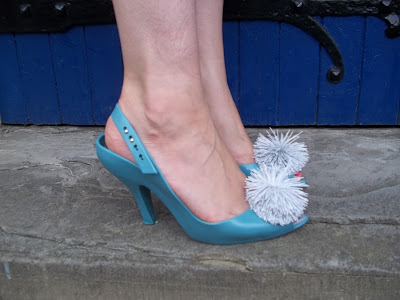 The pompoms. So ridiculous!

So, all in all it's been an excellent weekend. My ridiculous eyebrow twitch has even stopped. I'm hoping to be able to carry this relaxed attitude forward into the week.