You can stay here, with your boxes of shit and your shoe-eating dog, and you can knock yourself out putting on the Rogaine and the Speed Stick!

So, the freaking SUN has finally come out, which is joyous indeed. After all these months of grey skies and rain I confess, I'm finding it hard to adjust to it. I'm almost suspicious of it. It's like, what's your game, weather? What are you after? I joke. Mostly.

Anyway, after all of the excitement that the middle of last week offered, I was kind of in need of a quiet weekend. I'm not so young as I once was, and I was tired! Still, the sunshine meant it was especially fun to mooch around Leamington. I did some chores, and Nic and I set about exploring some of the new shops that have opened recently in our little town. 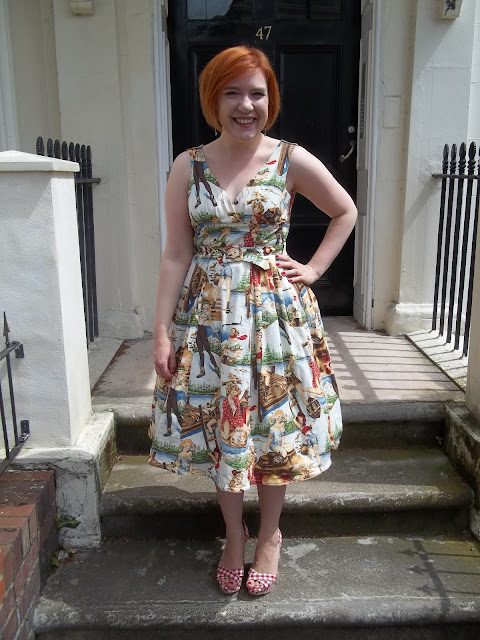 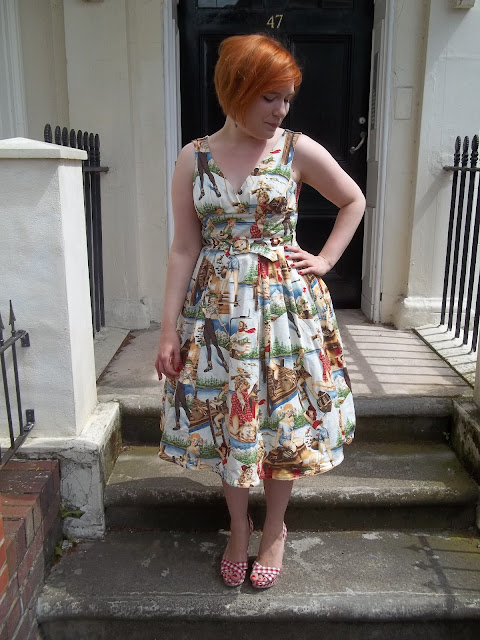 I included this one because it's your typical blogger pose, and I wasn't even doing it on purpose. Eeep! But my hair looks nice in it, so there's that

You've seen both components of this outfit before. The fabulous Limb dress came from 52 Greek Street and I bought the wedges when Nic and I were in Florida in March. They are cheapie copies of the Schuh 'Garda' wedges that you can see Amber wearing here, and I'm wearing the floral ones here. Anyway, they were very cheap and they're a reasonable dupe but I don't wear them often because they're basically made of cardboard. I'm keeping an eye out on ebay for a proper pair because I will be WELL sad when these die and I have to bin them.

Anyway, Leamington! It's a bit of a mixed bag, shop-wise. There are a fair few big chain stores, lots of charity shops, a few boutiques and the majorly middle class shops like Noa Noa and Joules (which are fab in the sales, to be fair) It doesn't have a bookshop, to my endless irritation, but luckily Books and Ink in Banbury is just a short train journey away. It's really nice to see more small independent shops opening in Leamington. First stop was Magpie, on Warwick Street: 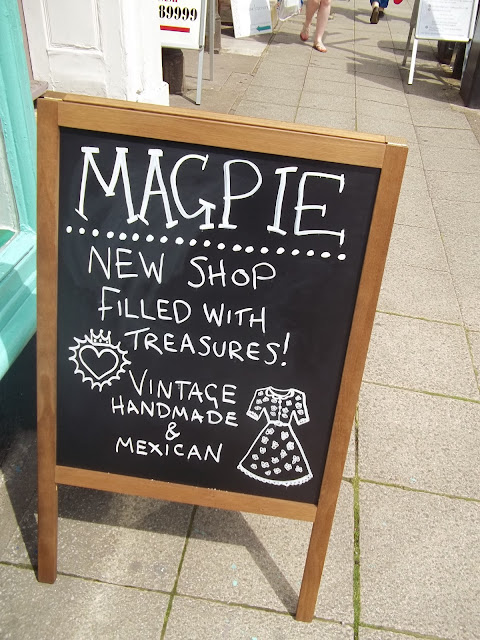 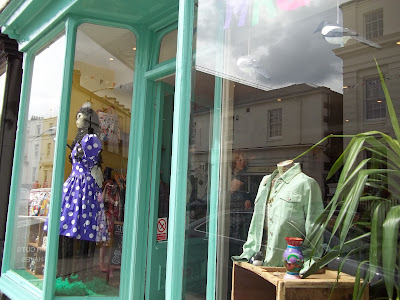 As the chalkboard suggests, Magpie sells vintage clothes, handmade homewares and Mexican crafts. They had lots of lovely 80s does 50s dresses, a few fab 70s crimplene maxi dresses and some seriously adorable Day of the Dead themed earrings. It's definitely worth a wee visit if you're in the area - the stock seemed well chosen and reasonably priced.

After Magpie it was on to Loot, in the Creative Arches off Clemens Street. I was fully prepared to write Loot off as hipster nonsense, because their marketing is fairly hateful (their slogan is "Break Away from the Mainstream" underneath posters depicting the five different types of people. Piss off) but I was curious about the space. I was really pleasantly suprised, however.

There was a really good selection of different styles and eras and the prices were pretty darned reasonable too - most dresses were well under £20. I tried on two frocks - one 70s Hawaiian deadstock sundress and a frankly beautiful (but tragically too small) handmade 60s frock - the fabric was stripy with deer and matryoshka dolls on it! So hipster nonsense or not, I'll be back!

Nic and I had a quiet evening in with a film on Saturday night (Morning Glory, which was enjoyable enough but totally mediocre) and an even quieter day on Sunday as he was feeling poorly. We got out into the sunshine to do some grocery shopping and spent the rest of the day enjoying our sunshine filled flat: 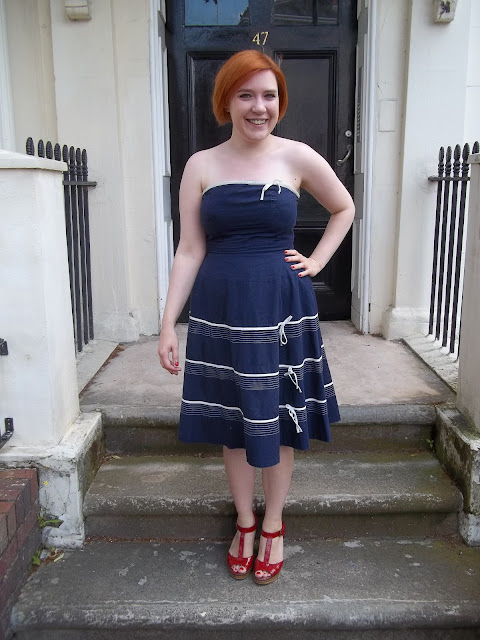 Ah not too much to say about this outfit except that I haven't worn this dress for ages and I have no idea why. Well, the crappy weather I suppose. Anyway in the interests of honesty I should tell you I only wore this for the first half of the day. In the afternoon it was all about a loose and cool maxi dress, so I could better enjoy the enormous vegetarian chilli I cooked for dinner. YUM.

Now, I'm off. This evening is all about pizza and wine and friends. Hurrah!