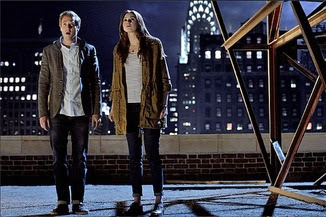 Arthur Darvill and Karen Gillan as Rory and Amy in Doctor Who: The Angels Take Manhattan - photo from Hitfix

I'm one of life's crabbers. Call me Lucy Van Pelt. But it's honestly not often something moves me to voice a strong complaint, certainly not something on television. But this is the case with last night's episode of Doctor Who, The Angels Take Manhattan. I'm mad as hell.

It's not because this episode - which saw the Doctor say goodbye to his companions - was bad. Although, it was. Perhaps it seemed particularly weak after a few very good episodes, especially A Town Called Mercy and The Power of Three. It's not even because, as a Doctor Who fan, I'm tired of Steven Moffat's seemingly endless need to self-reference and to repeat his own 'brilliant' ideas, although I am. No, what made me very angry and incredibly upset is how Steven Moffat feels it's appropriate to depict suicide on a prime-time television drama that is explicitly marketed at children.

Before I go on, I should say that if you haven't yet watched The Angels Take Manhattan and you don't want to know how it ends, please don't read on.

The Angels Take Manhattan saw the return of Moffat's pet monsters, the weeping angels. I've never been a massive fan of the angels, but it did seem fitting to bring them back for the Ponds' last adventure. It was certainly a sweet idea to set the action in New York because it gave us the opportunity to see The Statue of Liberty as a weeping angel. That was pretty neat. This time the angels were engaged in creating a battery farm (in Battery Park, I see what you did there) to guarantee themselves a permanent food source. So far so good. There was lots of creepy and fun stuff with the pulp detective meeting his own future self and Rory coming face to face with spooky baby angels. Sadly, Moffat's obsession with killing off poor old Rory the Roman meant that Rory got caught up in the battery and faced an unrewritable future in which he died old and alone in a hotel bed, without Amy. The only way out of this, it seemed, would be to create a paradox, which Rory decided to do by jumping from the top of a tall building.

I have had issues previously with Moffat's handling of suicide. The series end of Sherlock showed Watson watching his good friend Sherlock Holmes jump from the top of Barts Hospital and splatter on the pavement in front of him. The fall could clearly be seen, as could Holmes's mangled body on the pavement and the distress and shock on Watson's face. This upset me greatly at the time - as it was calculated to do - not least because it totally ignored The Samaritans Advice for the Media: Dramatic Portrayals of Suicide which advises that:

An easily obtainable means of death is easy to imitate, for example taking pills or jumping from a high place. Means of death where there is no easy form of intervention should also be avoided, as should the precise depiction of method. For example, showing how a hose pipe is attached to an exhaust and sealed up windows. Any detailed description of suicide method is potentially harmful.

I understand that in Sherlock, Holmes's fall from the top of Barts was intended to be a reimagining of Holmes's plunge into the Reichenbach Falls. Fair enough - and fair enough to fake the viewer out, because is this not exactly what Conan Doyle did too? My issue was with the extremely graphic depiction of it, which felt totally unnecessary even in a programme aimed at adults and broadcast after the watershed. Additionally I felt that Sherlock eavesdropping on the grief of Watson and Mrs Hudson was problematic. The Samaritans guidance states that it's potentially dangerous to overemphasise the 'positive' results of a suicide:

Admittedly, this doesn't appear to have been Sherlock's motive for his 'suicide' but to me it seems to suggest that his 'death' enabled Sherlock to see what he really meant to the people in his life.

All of this is slightly by-the-by in that it doesn't relate directly to The Angels Take Manhattan. Sherlock has a different audience, after all. Yet still, I found myself last night watching a Stephen Moffat-authored prime-time television drama in which a lead character's main problem is solved by a suicidal leap from a tall building. Only this time, the audience was children. Rory and Amy decide that the only way to escape the angels' battery farm is through a suicide pact. Together they jump from the top of the building. Unlike Sherlock, you don't see their mangled bodies on the sidewalk beneath. But what you do see is a graceful, romanticised slow-motion fall. What you do see is Amy and Rory emerging, however briefly, totally unscathed from their suicide. This suicide acted as some sort of 'reset' button. It allowed them to go on and experience a long life together.

Amy and Rory's leap from the top of Winter Quay is problematic for all sorts of reasons. I think it's irredeemably irresponsible to show suicide as having a happy ending. I think it's absolutely disgraceful for suicide to have been shown as graceful and romantic. I think it's utterly reprehensible that a suicide pact was depicted as an expression of Amy and Rory's love for one another. Yes, it's fantasy - and they jumped in the expectation that they would somehow survive - but their decision to jump together as a way of ending their current problem was a suicide pact. I think it's a massive problem that this is presented in a drama that is being marketed to children. It isn't morally wrong to depict suicide in drama - but I do think it's dangerous to depict suicide as an answer to a problem, particularly in a drama that has children and teenagers as its audience. The Samaritans think so too, and they argue that media reporting and depiction of suicide can lead to imitative behaviour:

A German television series, ‘Death of a student’, depicted the railway suicide of a young man at the start of each episode. A 175% rise in railway suicides occurred in young people aged 15-19 years old both during and after the series. This effect was repeated when the series was shown again some years later.

I'm not suggesting that The Angels Take Manhattan will lead to an increase in suicides in its viewers. But, as I said above, I think the BBC has a reponsibility to handle the topic of suicide with sensitivity and an awareness of their audience and I think they failed in this by allowing this episode to be broadcast. I think that Steven Moffat should be ashamed of himself for glamourising suicide in a show aimed at young people. I don't believe that he will be, but I think that he should.
Posted by Roisin Muldoon