Ariel, listen to me. The human world is a mess. Life under the sea is better than anything they got up there.

Happy Easter everyone! I hope you're all having a great long weekend. I'm having a lovely time, doing very little other than spending time with Nic, doing a bit of sewing, and watching DVDs. After a very tiring couple of weeks, it's really good to have some time to just rest and do things at my own pace. Seeing some blue sky has also helped a lot, of course.

The particular bit of the public sector I work in means I get an extra half day on Maundy Thursday. I worked from home in the morning and was up extra early for a meeting with Australian colleagues. This was fine, and it meant I could knock off a little bit early and spend the afternoon hanging out with Nic. We went to Kayal for Business Lunch and had a walk in town. It was finally my chance to wear a dress I made when it was still snowing - hurrah! 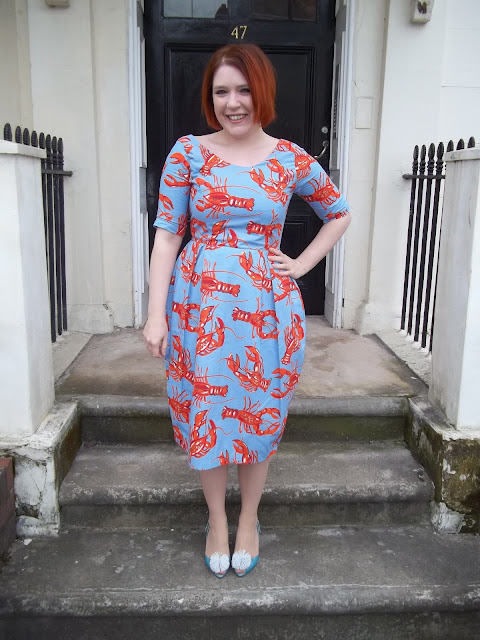 Now, I love a loud print. That's pretty clear. So, when I saw Karen's lobster print Hazel dress and Adrienne's lobster shirtdress last year, this fabric went firmly onto my wishlist. Lobsters kind of freak me out, to be honest. I don't have a phobia of them but kind of a morbid fascination - the lobsters and the crabs are the creatures I spent longest looking at when I went to Birmingham Sea Life Centre a few years ago. I'm kind of the same with insects - to me, they're basically aliens, you know? The other thing this fabric reminded me of was this awesome Charlotte Taylor 'Fire Ants' dress from a few seasons ago: 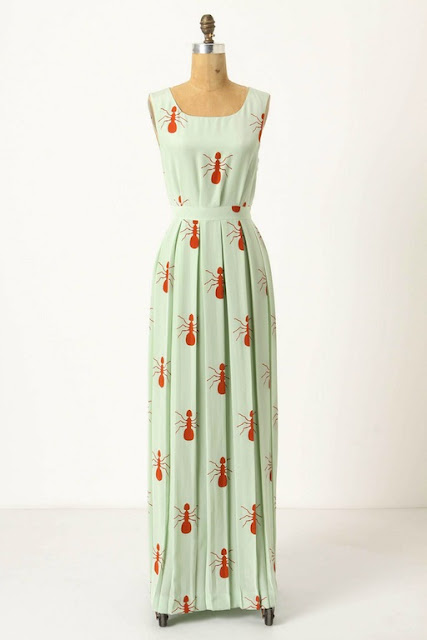 You can see the excellent Megan looking fabulous in that dress here. If I ever see this dress for a reasonable price on ebay I'll buy it. I probably won't though because it's from Anthro, and it's silk, both factors putting it beyond what I'm willing to pay for it. Anyway, the lobsters, right? So, at the Birmingham meetup and swap in November, Marie pulled the lobster fabric out and I was aaaaaaalll over that like a pigeon on sick. Can I just say that I love Marie? I think she's amazing, and not just because she gave me lobster fabric and because she looks like Kate Bush. She's just brilliant.

The fabric sat in my stash since then and I knew when the Elisalex pattern was delivered into my hot little hands it would be a perfect match. I had initially planned to make this dress before the Feckin Birds dress, but I got carried away with the Michael Miller fabric and lobsters took a back seat. It is the perfect fabric for this pattern though. There's a very slight stretch in it, which makes the bodice super comfortable, but it has very little drape so the skirt pleats sit beautifully. 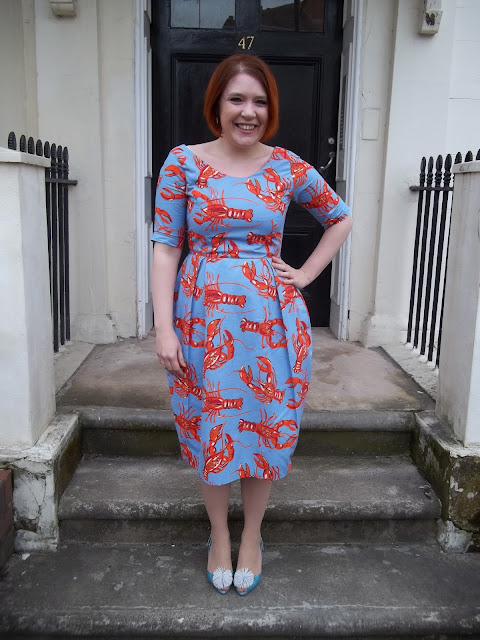 It was dark on Thursday, so the flash went off in the first photo. Anyway, this one is without the flash.

I cut the skirt pieces shorter this time round as I had to cut about a mile off the skirt of the Feckin Birds dress. Still, I gave this dress more of a midi-length skirt than the last one and I like that. I still think I want to make one with the skirt just above my knee though, I have this vision that it will look really tulip-shaped. I just need to wait for the right fabric to come along. It will.

For some reason I found this dress slightly less fun to sew than my first one. This is nothing to do with the pattern, which is still my wife, but maybe more to do with the fact that I sewed it while feeling really tired and a bit stressed. So I had to unpick and resew one of the sleeves and re-do the pleats on the skirt. Nothing major and to be fair, it didn't make me feel stressed or anything, but I suppose it's funny the way that can happen. I do love the dress though, and it's honestly one of the most eccentric things I have ever made or worn. I like that,  though. For me, that's one of the big attractions of sewing. Perhaps fortunately for me, Nic not only tolerates this gentle eccentricity but encourages it. He was inordinately pleased with the lobster fabric. 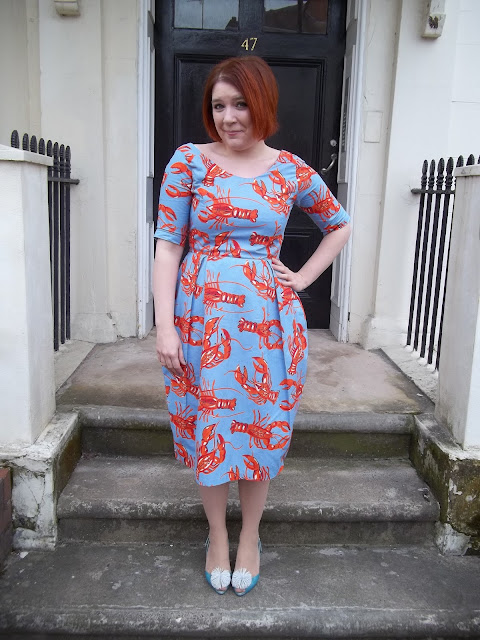 I can't remember why I was doing this face, but this is what I look like most of the time.

Anyway, I like it. It's surreal and the lobsters themselves are pretty horrible and creepy - their antennae are freakishly long. It made a small child stare at me for my whole meal in Kayal. But I'm going to wear it to work next week. Because, fuck it, why not. 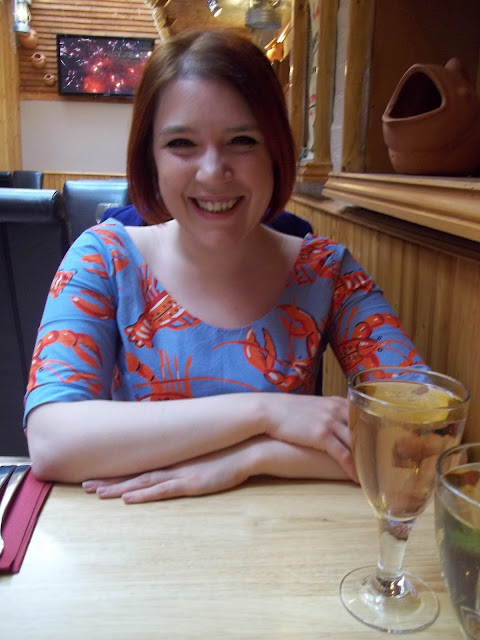 Kayal's speciality is seafood. I don't eat fish, though.

So, I'm off to watch more season 2 episodes of The West Wing and think about how much I love Toby (I would seriously marry Toby Ziegler, the grumpy beardy git) and shout 'SHUT UP DONNA' at the TV repeatedly. Because seriously, Donna. Shut up. Be more like Margaret. Also, SHUT UP, SAM.

I've been sewing lots, so check back in soon. Happy Easter everyone!

p.s. I know Sebastian is a crab and not a lobster but...