Hunting season on me is over. And the chemical formula for table salt is NaCl!

I took the day off last Friday to spend the day sewing, which is what I did. It was lovely – I had a lie in and breakfast in bed in the sunshine before settling down to my sewing machine. I had everything prepped to spend the day making Butterick B5882 – that beautiful new pattern by Gertie that Sew Busy Lizzy had sent me from Australia. And that’s what I did, but I found myself with my first proper wadder of 2013. It’s sad because it’s a lovely pattern, and I love the design, but it just looked wrong on me. I didn’t photograph it, and to be fair I’m sure I could do some adjustments to the pattern to get it to fit my body type but I decided I just didn’t want to. That lovely shelf bust design, instead of it giving me excellent Regency Boob, cut me off in the wrong place and gave me bifocal boob. Not a good look, my friends. Not a good look AT ALL.

Still, though. It’s all learning. And instead of being upset I went to the pub and reflected on my lovely day – a day I got to spend sewing in the sunshine, talking to Nic, and we even went out at lunchtime for a walk and lunch in Wagamama. It was good! So, after getting back from the pub I got back on the horse (chair) and made another dress. Another Elisalex dress. Another Michael Miller dress. ANOTHER PARIS THEMED BLOODY DRESS. I’m becoming a caricature of myself.

So the fabric was more of the Michael Miller Eiffel Tower fabric, which I bought from Fabric Inspirations last week. I woke up one morning with a need to buy it in red that I can’t explain, and lots of places are sold out of it. Fabric Inspirations sent it out good and quickly and with very cheap postage too, so that was good. Now that this is my fourth Elisalex dress, I knew what I was doing with it and it came together in basically three hours. I omitted the sleeves so the bodice lining is all encased – I love the way the instructions are worded for this, describing the lining as ‘profesh’ – and this time I decided to make the skirt shorter than I would usually so I measured it quite precisely. I wanted it to hit me just a fraction above my knee, and that’s what it does.

Obviously I can’t say ANYTHING about this pattern now that I haven’t already but, wiping away a tear here, I just love it so damn much. I really do. I went out and bought fabric at lunchtime on Monday to make another one, which I did on Monday night. I bet you’re all sick of the sight of them on this blog now but I don’t care. The dress is comfortable and cute and sassy and easy to make and looks totally different in each of the versions I have made so it’s totally versatile. Plus, I can make this slightly shorter version out of 2 metres of fabric, so it’s nice and economical as well.

The idea of taking this photo along the canal was better in my head than in real life.  It's a bit skanky down there.

I wore this on Saturday to go out for a walk along the canal with Nic and then later to Rick and Lauren’s house for champagne, pizza and Doctor Who. Because of the black in the print, I can see this being wearable into the later part of the year with tights too, so that’s a winner!

It’s not important to me to be able to sew a dress quickly, but it was satisfying to be able to put this together on Friday afternoon. I think I have come a long way in my sewing, not just in that I am getting better and learning new things all the time, but in my relationship with sewing. When I started, a dress not going well would have totally disheartened me. In fact, I started last year in a total funk because of a couple of projects not going my way totally throwing me. So, yeah, I make some mistakes. And maybe I could push myself more to learn new techniques with each project, but I enjoy sewing a lot and I really enjoy wearing the things that I sew! When I decided that the B5882 wasn’t going to be for me I started to pout, and then I considered telling Nic that I didn’t want to go to the pub after all because I wanted to sulk, but I couldn’t even work up a good pout. I was just feeling too happy. Also, I think my hit rate is pretty high. Since January I have sewed 16 dresses – including the wadder – and only one of them is properly a wadder. I like those numbers! 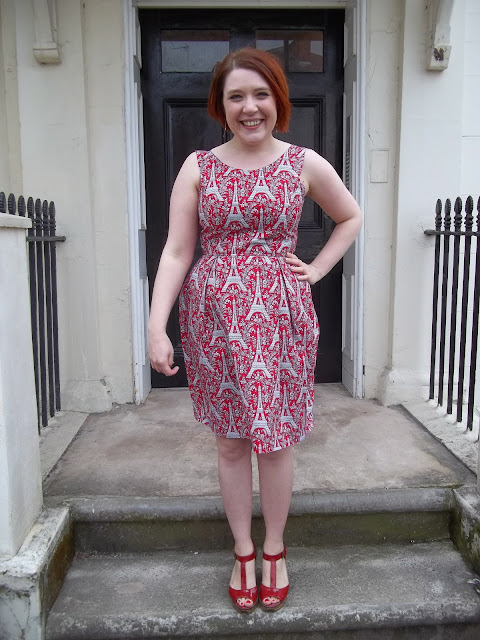 Anyway, ever onwards – I have fabric shopping to look forward to at Rachel’s meetup this weekend, and in Birmingham in June and oh did I mentioned I’m going to Paris, Paris France, in less than two weeks?! YES BOSS.

Nic tweeted to me on Friday to say "Il fait chaud", to which my friend Lucy interjected "No it bloody isn't!", and she was right. It wasn't terribly warm on Friday. But "Il fait chaud" is a phrase guaranteed to make me laugh, and Nic knows that, and it's because of this. Anyway, I'm hoping that before long, it will in fact be true.
Posted by Roisin Muldoon