I know I'd like to beat you senseless with a head of cabbage, I know that for damn sure.

Evening lovelies! After that idyllic, sunny bank holiday weekend today has been a bit of a washout! I also had today off, one of the small perks of working in the bit of the public sector that I work in. Still, after such a sunshiny weekend I can't complain about a bit of rain, really!

On Sunday, I taught my first dressmaking class at Berylune. It was a beautiful day, but I wasn't too sad to be indoors as the studio at Berylune is so light and airy and pretty. It didn't hurt a bit that I knew there'd be delicious cake on hand, too! I decided to wear a new dress for the occasion - bringing me over the making bit of my Me Made May pledge!

Sunday 26th May 2013 - Landlocked dress and red wedges from Primark

Aah! My eyes are closed in this photo. Sigh. Anyway, yes - ANOTHER nautical-type dress. I have wanted this fabric - Rigging, from the Michael Miller 'Ahoy Matey' collection - ever since it came out, and I decided the other week to buy some before it became too difficult to find. Really, the only thing to do with it was turn it into a sun-dress so I frankened up a pattern. This is my by-now-standard gathered skirt, with the bodice from NL 6886 and the straps from Hazel. I really love the end result!

So, being as I can't actually swim and Leamington Spa is nowhere near the sea, I named this the Landlocked frock. My in-laws live by the sea, though, so maybe at some point I'll be able to wear this while frolicking in the surf.

There's really nothing at all to say about this make. I lined the bodice in some navy cotton from my stash, and only needed to make minor adjustments to the shape of the neckline to accommodate the wider straps. The placement of the original spaghetti straps is at a little raised bit, which I changed to a slightly wider raised bit... erm, this explanation isn't very technical, is it? But then, my process wasn't all that technical. I futzed around with it a little bit to make sure that it covered my bra straps both front and back because, gosh knows, I love wearing a proper bra. Anyway, I did get a photo of that but my computer is being so irritating and won't let me rotate it. I'll leave the straps and my chubby back to your imaginations.

Sunday was really great. I had one student, and she had a fair bit of experience in dressmaking but wanted some encouragement to get going on a sewing pattern. I love teaching, and of course I love sewing, but I was amazed by how quickly the day sped by. We have another session this coming Sunday, at the end of which we will have finished one dress and have cut out and maybe started another one! It was immensely satisfying to see my student's confidence grow as the day progress, and watch her become more excited as her dress took shape. We were joined during the day by the amazingly talented photographer Fiona Murray. You can see her photos and read her blog post over at her blog here, and I hope she won't mind me sharing this one with you: 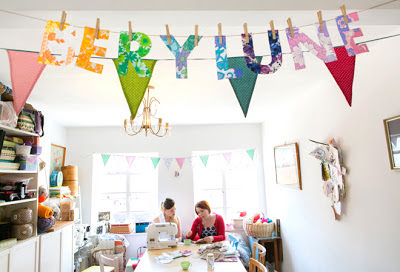 One of the really lovely things about having Fiona there was seeing how she became enthused about dressmaking as well - and she may even join me for a future date to make a dress to wear to a wedding. I love how the buzz of sewing can be infectious! It's one of the reasons why meeting up with other stitchers is so enjoyable. Nic thinks so, too; it's why he's decided to join me when I go along to Marie and Kat's Birmingham meet-up on 15th June!

Anyway, it was a really enjoyable day. Four o'clock sped around far too quickly, but it meant getting out into the sunshine for an ice-cream in the park with Nic. I'm looking forward to teaching more classes with Berylune, but I'm going to have to be very disciplined if I want to break even at all. I failed on that note this time... 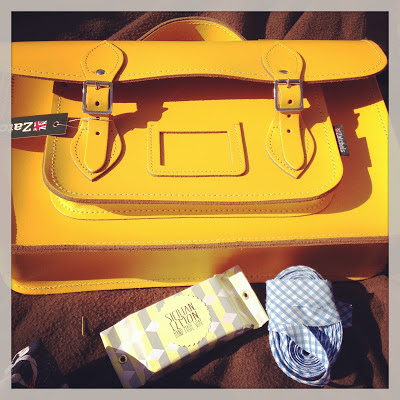 So, yeah. I bought another Zatchel satchel - and some gingham bias binding. Emily sneaked the handmade lemon soap in as a surprise. I'm still waiting on the green satchel I bought from the Zatchels birthday sale - its purchase is turning into a bit of a saga - so I don't feel too bad about splashing out on this beautiful sunshine yellow one! But, yeah. That's probably enough for now.

And that's me for this evening. More me-made-may coming up later in the week, and some Scott and Bailey recaps, too!
Posted by Roisin Muldoon