You take care of that detail in France. I hear they got some pretty dangerous mimes over there.

BONJOUR MES AMIES, which is what they say en France, you know. Heh! Well, Nic and I got back from Paris on Friday and I have tons to catch up on blogwise, not least my Me Made May outfits and catching up with Scott and Bailey recaps and also, you know, around eleventy thousand and three photos of Montmartre. But I'm going to get started with the juicy stuff and tell you all about the fabric shopping. I did a lot of big talk before I went about how I was going to buy loads of fabric, and I had been saving up. But I suprised even myself. I came home with a lot of fabric. Paris was absolutely wonderful for lots of reasons, but staying in the garment quarter was definitely one of them!

Nic and I stayed in Montmartre when we visited Paris in 2010, and completely fell in love with the area. It's just so charming, you know? So this time around, although the rational bit of my brain thought maybe we should stay in another arrondissement, we both felt a really strong emotional pull towards the 18th. We found a studio apartment on Rue Feutrier through airbnb, and as well as being gorgeous, it was five minutes walk away from Place Saint Pierre. It was also five minutes away from comic shops and awesome bars, and it had a view of the Sacre Coeur, but that's a story for another post. Today I'm going to tell you what I bought and where I bought it!

Now, having visited Paris a few times before, I knew exactly where I wanted to go when I got to the fabric district. THIS gorgeous place: 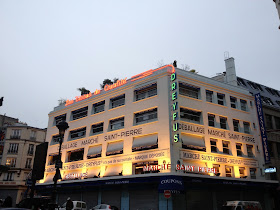 Dreyfus - Marche Saint Pierre, on Rue Charles Nodier. I was weird enough to take this photo both at dusk and at night because I loved the lights.

This was the only place I bought fabric from the last time we went to Paris. Although I didn't buy anything from there this time, it's not because it wasn't awesome. There are five floors of fabric here, every single thing you can think of. Unlike lots of the other shops nearby that sell only coupons (pre-cut lengths of fabric, usually 3m but sometimes less) fabric is sold on the bolt here. Type of fabric is arranged by floor, and it works on a system. You find your fabric, you get someone to cut it for you, they give you a coupon, you pay for it at the little box. You can only pay for fabric on the floor you're buying it from, which could potentially mean lots of transactions! But it's fine, and my experience was that the people in there were really patient with my halting French. On the street outside, you'll find the special deals of the day, which is also pretty neat.

While Nic was browsing in comic shops, I found a little independent comic by Dominique Corbasson about Montmartre. I bought it because it was beautiful, and because it had a few pages about the fabric district. This is the one of the pages about Dreyfus - Marche Saint Pierre: 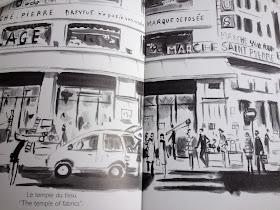 Almost directly across the street from Dreyfus - Marche Saint Pierre is the delightful and bizarre Tissus Reine. I didn't take a photo of the front of the store, but my Montmartre comic has this beautiful illustration: 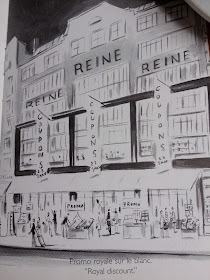 Reine works along the same lines as Dreyfus in that fabric is laid out by type and across several floors. It's a bit brighter and fancier than Dreyfus and correspondingly a bit more expensive! But it's really fabulous and I may have skipped around in joy when I was in there because I'm a dick like that. My favourite thing about Reine is the half-sized mannequins that they have, dressed in clothes handmade by couture students. They're weird, but I love them and would kind of love one in my own house. The best thing was that we went in twice, a few days apart, and the mannequins had MOVED. It freaked Nic out. 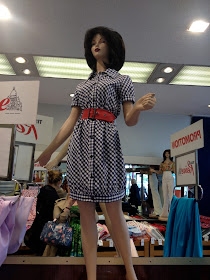 This lady was by the ginghams - I loved the way her shirt dress was cut on the bias and had that hem! 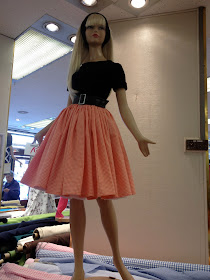 This one was wearing a little petticoat!

In the printed cottons section on the ground floor, Reine had an Eiffel Tower section, and I'm a twat so I made a beeline for it. 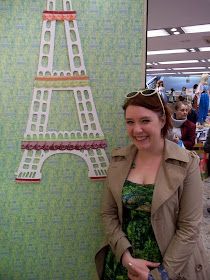 What's French for twat? Is it 'Roisin', by any chance?

It won't surprise you at all that I bought some Eiffel Tower fabric. I mean, how could I not?! The people in Reine were very charming and didn't even laugh that much. Here's what I bought: 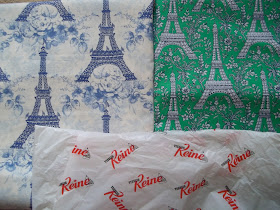 I can't remember the designer of the blue and white Eiffel Towers, but it was too lovely not to buy. And der, when I saw the Michael Miller in green it was a no-brainer. I had actually seen it across the street in the craft and haberdashery branch of Moline, but it was like 23 euros a metre! In Reine it was 14 euros a metre, as was the blue and white. This was by far the most expensive fabric I bought on the whole trip! One of the seriously cool things about Reine, apart from the mannequins, is the sheer range of people shopping in there. It was packed out each time we went in, and with all sorts of people. I loved that.

I bought a good bit of fabric slightly away from the main cluster of fabric shops. The little branch of Tissus Toto on Rue Clignancourt was right around the corner from our flat and was totally awesome in every single way. The wee man who ran it came to know me by sight, and I think he found me quite a curiosity! We also visited one of the bigger branches on Rue Barbes, but I only bought fabric from the Clignancourt branch. Toto sells a huge variety of fabrics and haberdashery, as well as towels and household linen, and it specialises in African fabrics. You can buy fabrics on the bolt and in coupons, and I stuck to the coupons. 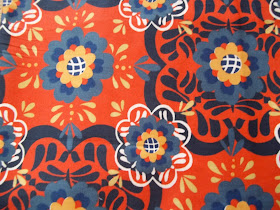 I bought 1.9 metres of this beautiful printed cotton from the bargain bin at the door. This was the first bit of fabric I bought in Paris and I majorly heart it - it was 8 euros I think, and it's 60 inches wide. The photo doesn't really do it justice! 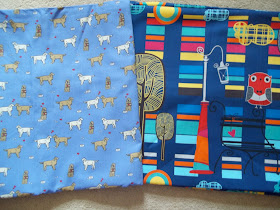 I went back for the dog fabric on our last full day in Paris, having spotted it on my first trip into Toto. Like, it was too ridiculous not to buy it. You can't see in this photo, but some of the dogs are wearing signs that say "I love you". This is a 2.5 metre piece and was 8 euros. The night-owl fabric is a 3 metre piece and was 10 euros, I think. They're both 100% cotton - in fact, everything I bought was. I was really tempted by all of the beautiful waxed cottons but thought that I probably wouldn't realistically sew from them. If you're visiting Paris for fabric shopping, don't miss Toto. It's awesome.

It probably isn't helpful to get too specific now about all of the other fabric shops in the Marche Saint Pierre - there are so many, and lots of them are really small! Most of the little shops on Rue d'Orsel, Rue Dancourt and Rue Sevestre sell a combination of fabric on the bolt and coupons. A number of the shops will only sell coupons, but this system is pretty clear. The fabrics are organised in bins by type, and each piece is labelled with the fabric content and the price. Job done. There are lots of these shops and, to be honest, lots of them have similar stock, but it's fun for a rummage! The remnant stores of both Dreyfus Marche Saint Pierre and Reine are in this area too, and that's where you'll find the coupons from those stores. In Coupons Saint Pierre, at 7 Place Saint Pierre I bought: 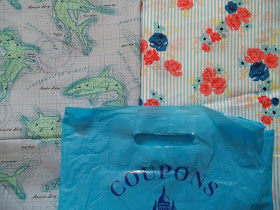 3 metres each of 100% cotton - the strange sea-chart fish print one, well, I can't really explain that other than it made me laugh. The stripy floral is a bit different to my usual style, but I thought it was sweet. These were each 9 euros. This place was also great for silks and designer fabrics, if that's your bag. The other great big coupons shops in this area were La Folie des Coupons on Rue d'Orsel and Au Bonheur des Dames on Rue Stephenson, both of which were pretty awesome. I didn't buy anything in Au Bonheur des Dames (which made me sad because it's the name of one of my favourite novels) but I did in La Folie des Coupons: 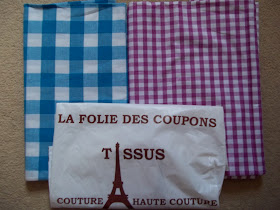 You thought my gingham fixation from last summer was over? Yeah, no. Lovely pinky purple small gingham and the perfect turquoise fat gingham, both 100% cotton, both 3 metres, both 9 euros. I did a little dance of joy when I happened upon the blue one because this is another one of those fabrics that I've been looking for that should be easy to find but isn't. I also LOVED the fact that the bag has the Eiffel Tower because I'm a dick like that.

That's all the fabric I bought, but that's only because it's basically all my arms could carry. I'm sure there are lots of other places in Paris to buy fabric but we were staying right here and there is so much choice. It's also a great area for general haberdashery and also for yarn. I'm not really a button person, but Dam Boutons on Rue d'Orsel had a gorgeous selection. Caverne d'Ali Baba, also on Rue d'Orsel, had an amazing selection of trims and pompoms. Laines on Rue Cazotte is a beautiful place to buy all manner of yarn. You can buy all sorts of haberdashery everywhere - even the giant discount chain Tati, which has numerous branches along the Boulevard de Rochechouart - carried a decent range of haberdashery. They also had some awesome comic book printed bed linen which I'm sort of gutted I didn't buy.

If you ARE going to Paris and you're planning on doing some fabric shopping, seriously don't miss the Marche Saint Pierre area. It's just a lovely area, as well as having lots of excellent fabric shops. Try to speak French if you can - mine is pretty basic but actually, that's all you need. Most of the shops are used to tourists and will help you out in English if you need, but it's good manners and good practice to speak in French anyway. I had nothing but positive experiences in all of the fabric shops I visited, and I am really excited to sew up some of my treasures! And Nic and I are already planning our next trip back to Paris.

But don't just take my word for it. Karen of Did You Make That? has written a guide to Paris Fabric Shopping, Melissa of Fehr Trade wrote a lovely guide here, too. In fact, talk to Melissa about cheese shopping in France while you're at it.

I will come back in the week and tell you about the other things that we did in Paris! But for now I'm going to leave you with a few more pictures... 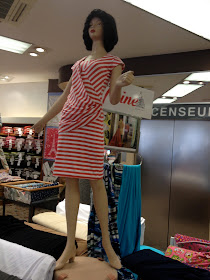 I loved this mannequin's stripy dress 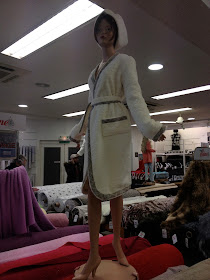 Upstairs in the home linens department of Reine 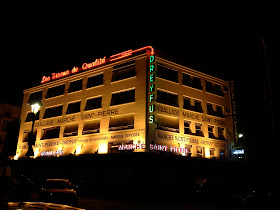