Evening! I've been having a busy week so far, having officially started my new job on Monday. Considering how much I usually complain about work, I've been feeling great about it. Today was genuinely excellent, in fact. I hope this a trend that continues. Anyway, what with that and the suddenly glorious weather I have fallen behind with blogging a bit. I have two finished dresses to post about, and three episodes of Scott and Bailey. OOOPS! Well, I suspect that most of you aren't hanging out dying to read my thoughts on Scott and Bailey but in the interests of completeness I will post those final recaps pretty shortly.

So, things are all good here in Casa Clackett. The weekend truly was glorious, wasn't it? On Saturday, Nic and I got out into the sunshine for a walk and a picnic. In May I bought a dress on ebay that I couldn't really wear until my Me Made May challenge finished, so I was excited to wear it. I'm sad like that. We went for a walk along the canal, did some grocery shopping and then had a picnic lunch in Victoria Park.

I actually have this dress in green and love it, so when I spotted the pink one for £2.50 on ebay, I pounced. I altered the green one to make the halter straps into shoulder straps and I am considering doing that with this one, too. Halternecks are cute and summery but wearing one usually gives me a headache with the weight of my bust dragging on the neck-ties. This one didn't though, so I'll have to think about it. This was the perfect dress for a lazy Saturday, I'm very glad I bought it and that the weather was obliging enough to allow me to wear it! Saturday was also the first proper turn out of the satchel I bought in the Zatchels birthday sale. It finally arrived on Thursday 30th May - after having been ordered on 20th April. The satchel itself is beautiful and I really do love it - it's really beautifully made and is a vibrant kelly green in real life, and the 11.5" size is perfect for a small handbag. I now have three Zatchels bags and I'm really happy with their overall quality.

That said, I'm not sure I would order directly from Zatchels again because I was pretty unimpressed with their customer service. I understood when I ordered that it could take up to 30 days for my satchel to arrive, and that they'd probably be a bit busier due to the popularity of the sale. So I honestly didn't mind waiting a while for the satchel to arrive. I was thoroughly unimpressed by the emails from the director, Dean. I'm not on Facebook but I understand the Zatchels page was filled with complaints from customers. An earlier email acknowledged this and apologised but another email at the end of May to all customers basically said "they're taking longer now, be patient, you'll get it when you get it" which I didn't think was an adequate response really.

I should say that I was feeling a bit irritated having had ordering shenanigans with my satchel. It was delayed due to them running out of green leather - which I only found out after numerous emails and then eventually on twitter. Then I got an order confirmation a good four weeks after my initial one, with a new order number. After chasing this up on twitter, I was told that this was in error and I hadn't been charged. That order was cancelled, but then a week later I was refunded my initial order with a snotty email saying "we see you no longer require your satchel"! I got good customer service over the phone and on twitter, and my satchel was eventually re-paid for and dispatched, but the whole thing was such a saga it puts me off ever ordering from them again. Luckily lovely Berylune stock them, so should I find myself in desperate need of another one, I'll buy directly from them. Brilliant customer service and no waiting around, either! Or, you know, I could just have waited til the Brandalley sale 5 weeks after my order, because the people who bought satchels then got theirs a day or two later. Not too impressed, Zatchels.

Anyway, enough griping because I do LOVE my bag. I used to have a bright green handbag in my PGCE days which died from overuse, so it's nice to have another one back in my life.

On Sunday, I was teaching the second part of my Colette Patterns Hazel class at Berylune. My student, Hannah, had managed to get loads done in the first session so we were keen to crack on and get her dress finished. We were joined again by the amazingly talented Fiona Murray, who took lots of beautiful photographs. Look at her website to see who else she works with - I'm in GOOD company! We got our heads down and had completely finished the dress - zip, hem and all - by 2:30, so I helped Hannah with her next project as well. Have a look at Fiona's blog for her thoughts on the day, but I'm also going to pinch a couple of photos to show you!

L-R - a box of amazing vintage seam bindings that Hannah bought on ebay; showing Hannah how to pin a lapped zipper in place; work in progress 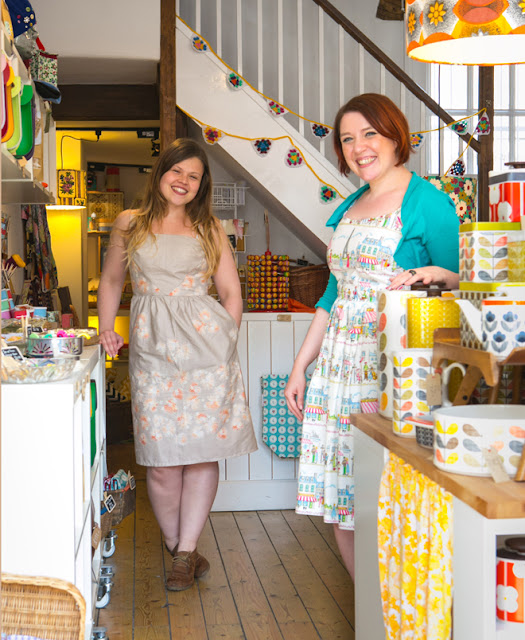 The finished article - Hannah in her gorgeous handmade Hazel dress, modelled in the shop at Berylune.

Hannah had bought the fabric during her travels in Thailand, and hadn't thought she would have enough for a dress. The Hazel dress requires pretty minimal yardage so we were able to use the v-shape of the bodice and the dirndl skirt to really make the most of the fabric's border print. I think I was as thrilled to see Hannah's dress completed as I have ever been with any of my own. That's the joy of teaching, I suppose! If you're local to Leamington Spa and want to sign up to my classes you can do so here.

So anyway, that's enough of me for this evening. I have dinner to cook and things to do. Watch out for some Scott and Bailey chat coming your way soon, though!
Posted by Roisin Muldoon