Sorry, Ted. I was concentrating too hard on looking holy.

Hi everyone! Or, as we like to say here in Northern Ireland, 'BOUT YE? I'm having a very happy and relaxing time here at my parents' house. Nic and I haven't been up to much apart from spending time with my family, and watching all manner of trashy TV. It's been just what I've wanted.

My home town of Dungannon has been really improving over the last few years. A lot of work has gone into celebrating the town's rich history, and a beautiful new visitor centre has opened in the Market Square, in Ranfurly House. We popped in on Tuesday afternoon for a coffee in the tearooms there, and because Daddy wanted me to meet the Dungannon Cow: 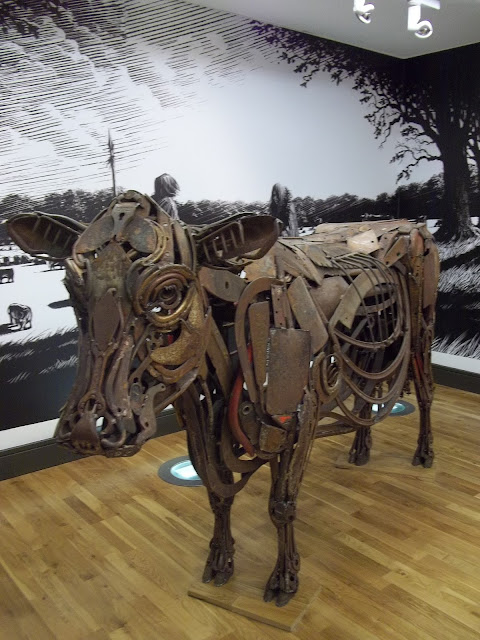 The Dungannon Cow. It's pretty cool, and my dad was very excited for me to see it! 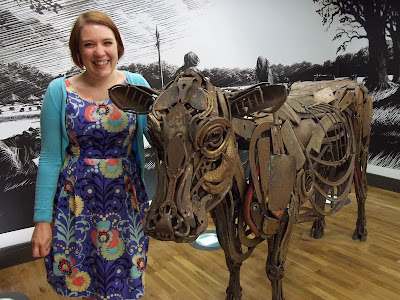 The Dungannon Cow...and a sculpture.

Art isn't art in Ireland unless it is cow-themed. Just so you know.

Anyway, it's good to be home. I'm not even missing my sewing machine - although I will be looking in the fabric shops in Belfast later this week. Well, if I can tear myself away from my Boojum burrito, that is. I did a little bit of sewing on Saturday so I could have a new handmade dress to wear at home! No, really a little bit of sewing on Saturday afternoon was a reward to myself for a very busy week at work, and because I wanted another By Hand London Anna dress. I went into Royal Fabrics on my way home from work on Friday looking for some star-print cotton. I wanted navy but only had red, pink and black to choose from - so I bought two metres of the red and a matching zip. 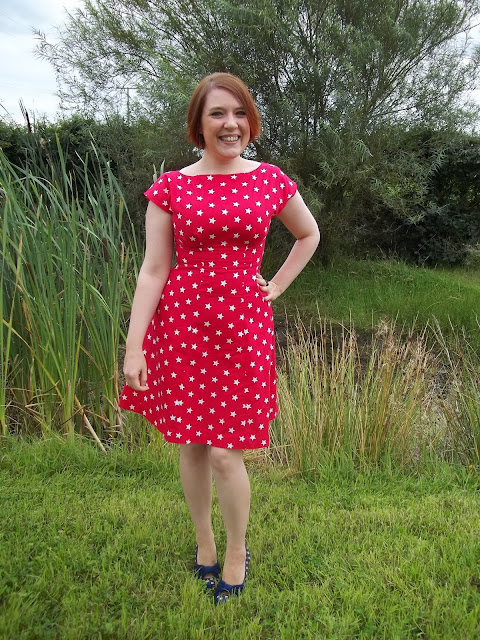 Tonight We Fly dress - By Hand London Anna dress. If you feel like you want to sew your own, those talented ladies will be running a sewalong starting on 16th September.

I knew when I bought the red star print that I was running the risk of it looking very similar to my red polka dot Anna dress. And, I mean, it does. I am becoming a bit ridiculous now, I know. I made a small attempt at making this dress a little different by giving it a lapped zip rather than a concealed one, and I made this dress a fair bit shorter. But really, I don't care that much about having two similar dresses. 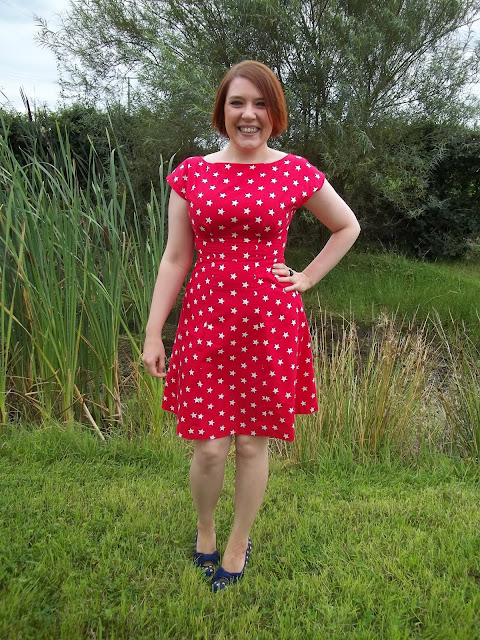 My sister has already asked me to make one of these for her.

It wouldn't be a trip home without being photobombed by the dog. Her name is Mini, and my mum decided the other night that her middle name is Patricia. 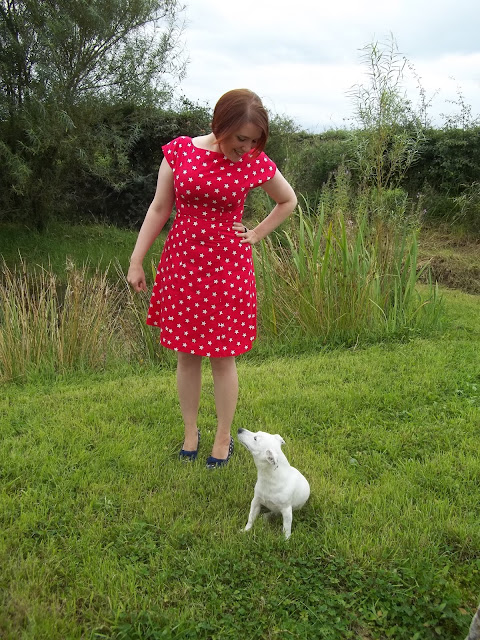 Getting the approval of the dog is important. Her opinion carries a lot of weight round here. I don't think she's that fussed though, as she was busy scratching here. 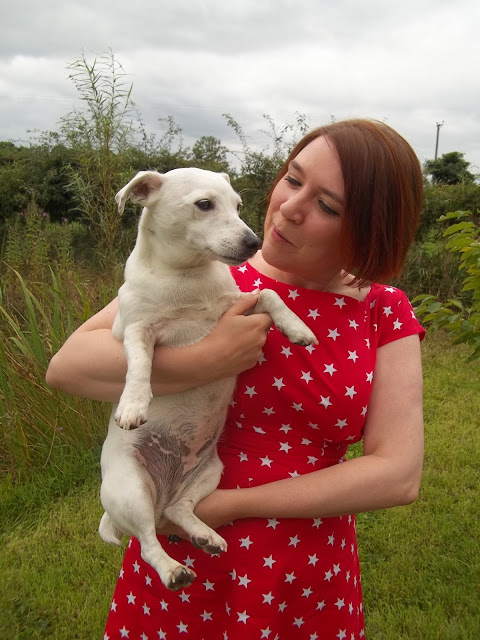 I think it just about passes the small dog test. She was equally unfussed by my shoes, as you can see... 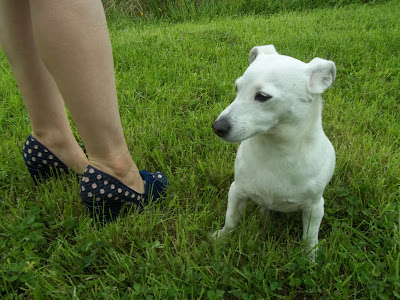 "I don't think you're going to be able to take me for a long walk in those high heels. Mini seal of approval DECLINED."
Whatever, Mini. I like them.
. 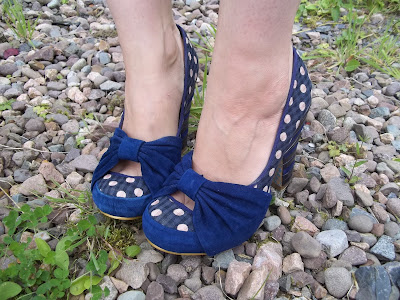 Nic and I went back into town today to spend a bit more time in Ranfurly House, learning about The Flight of the Earls, and had an explore around Castle Hill. This part of the town was closed to the public for most of my life, as it was the site of an army barracks. It closed a number of years ago, and an archaeological dig took place on the hill - in ancient times, Dungannon was the capital of Ireland, and the site is significant for that reason. The visitor centre is mostly devoted to what the town was like in the 17th Century, although the settlement is much older. There's a Wall of Fame - which has some spaces for nominations... 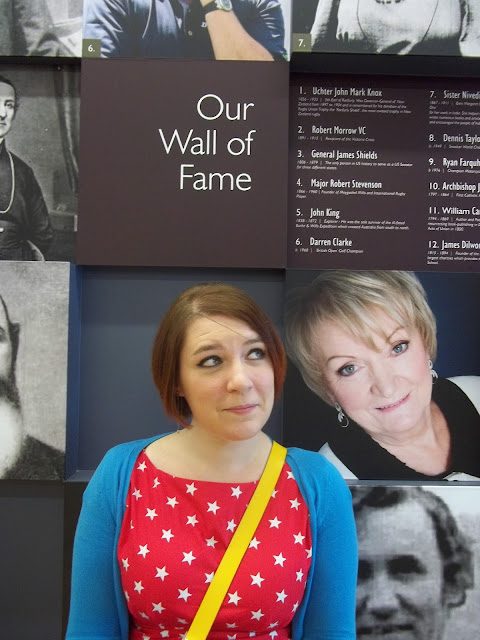 All right. I'm not as famous as Philomena Begley. YET.

It was a delight to explore around Castle Hill. I mean, there's not much up there, but it's such a treat to be able to get up there at all. And the view is incredible: 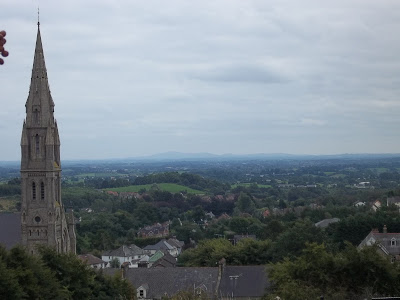 View from Castle Hill, Dungannon  - those are the Cooley Hills you can see on the horizon. 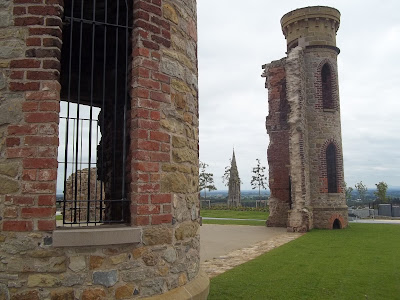 The ruins on top of Castle Hill

Obviously on a clearer day, the view would be better, and it doesn't necessarily translate brilliantly to photograph, but it was certainly beautiful. It's good to come on holiday to my home town - it helps me to see it through new eyes, and appreciate what a beautiful part of the world I was brought up in. Hopefully I'll be able to get back up there before we have to go back to Leamington on Sunday.

Anyway, that's me for this evening. That trashy TV isn't going to watch itself, you know. I'll leave you with a bonus photo of the dog, because I'm good like that. 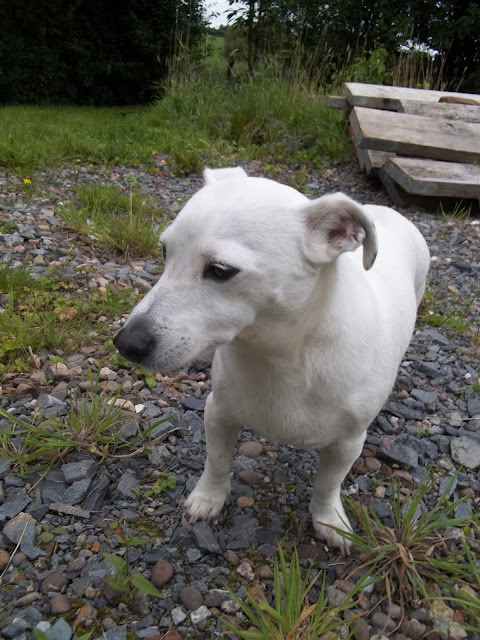