You made the same mistake that Mickey Rourke made on that catamaran. You didn't kill me when you had the chance.

Evening all! I hope everyone is having a good week - and now it's Wednesday night so it's very nearly almost the weekend. Can you tell I'm ready for my holiday yet?!

I've had a funny old day. I woke up in a bit of a grump because my sleep had been disturbed by our new noisy downstairs neighbours. I still think they're not quite as bad as the last guy, but they are weird. The girl one is always shrieking - which is what disturbed my sleep. Why do people have to be so weird? Anyway, I put on my Promised Land dress in an effort to wake myself up, and left to go to work. I got to the station only to find my train was delayed by almost an hour, so I turned and went home. I stopped on the way to buy some croissants, though, so it wasn't totally annoying. 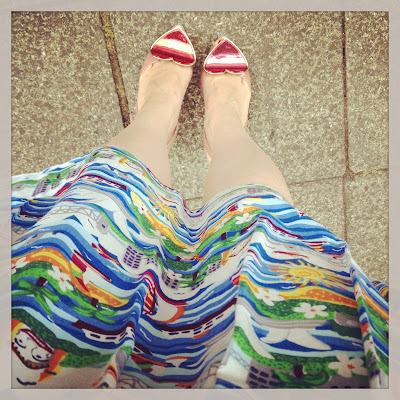 Having an unintended working from home day had its up-sides. It made me happy to be working alongside Nic, who was busy proof-reading. It made me less happy to have to listen to the millions of builders all around my house making a terrible racket. I know they're just doing their jobs, and that's fair enough, but I could really do without having to listen to them yelling while they're doing it. The work I was doing nearly made me cry, too. Mainly because I was doing data analysis, working across lots of different spreadsheets and my work laptop did not agree that having more than one thing open at a time was a reasonable request. It was so frustrating - I'd try to open a spreadsheet, get the wheel of death for ages, and then the computer would bring me proudly to the one I already had open. OMG COMPUTER WHY YOU NOT UNDERSTAND? Sometimes I really do think they do it on purpose.  I soldiered through and Nic and I went out for a coffee when I finished work for the day: 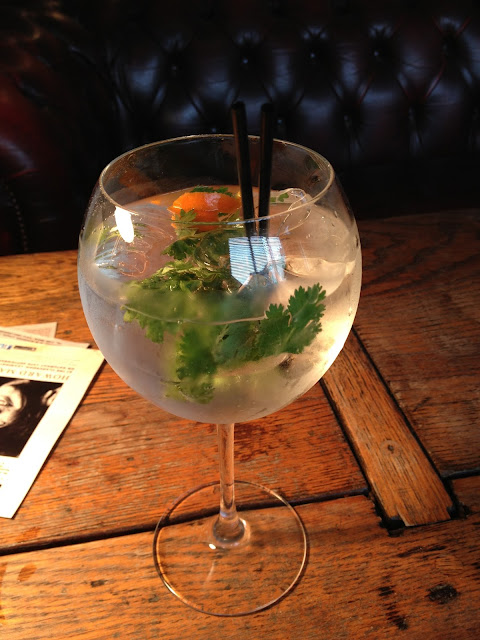 BUSTED. That is not coffee. We went to the pub instead, and that's seville orange gin, with fancy tonic, fresh coriander and some orange peel. YEEEAH.

So yes - gin and shoes. That's two of my top three favourite things, so here's the third - dresses! 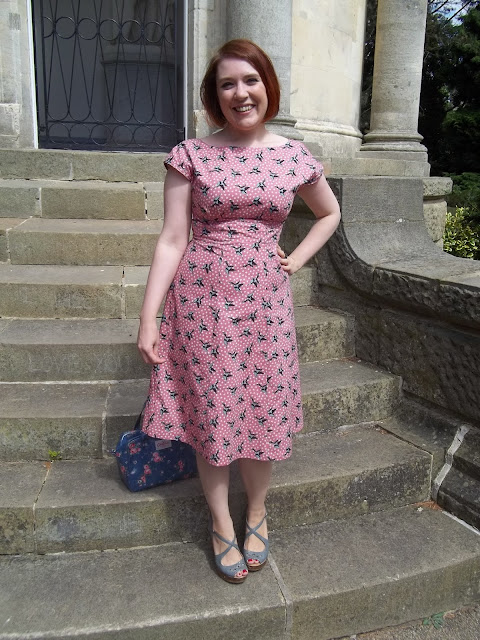 So, this is my third Anna dress. Third of probably about a million, because I have already made another one, and also when I was stressed today I was planning out which fabric to buy to make my next one. Yeah, that's not a surprise, right?

Anyway, the fabric for this version of the Anna came from the Goldhawk Road - the same shop that the polka dot for my Electric Boogaloo dress. It also came in purple, which I was very drawn to, but the  very chatty and charming lad that worked there suggested I go for the pink instead. He was right, like. The pink is more me and I think it's very sweet. When I finished this dress, I thought "Oh, I could wear this when I need to wear something a bit more plain" and when I showed it to Nic, he said "Oh, that'll be good to wear to meetings and stuff" - which made me laugh. This is my version of plain. 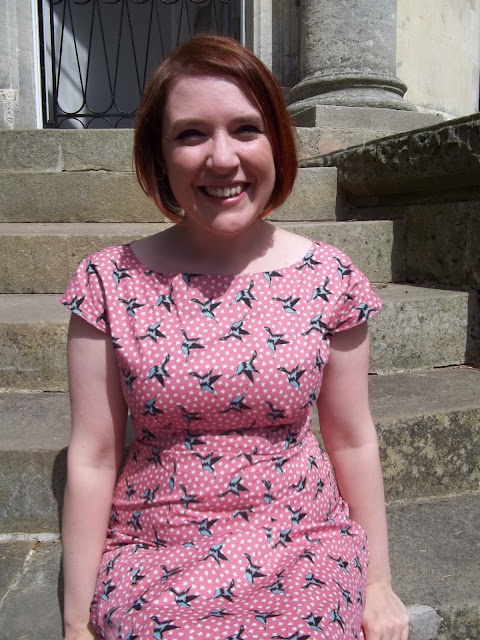 I'm looking a bit wrinkled here because, prior to these photos being taken, I was lying on the grass eating samosas in the sunshine

Apparently these birds are terns. They could be geese for all I know, but that's what I hear. Anyway, I thought the grey-blue and black in the pattern would mean this dress could work quite well into the cooler weather, and even with tights. Ugh, kind of sucks to be thinking about colder weather, doesn't it? I hope we'll have a couple more weeks of not having to think about layers. 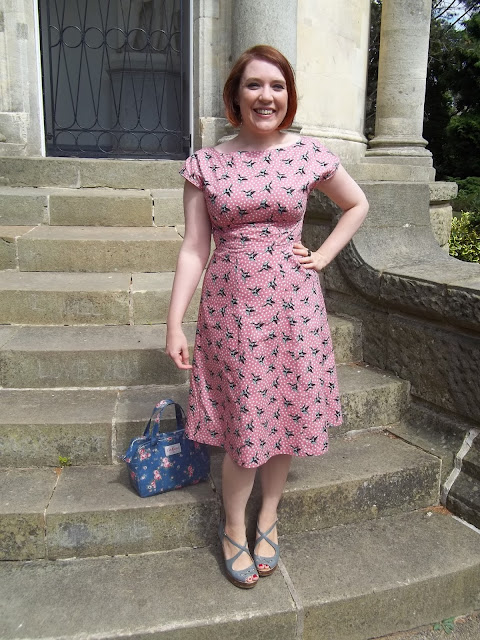 This dress is much, much cuter in real life. It doesn't photograph that well though, which is very annoying! The shoes are cute though, aren't they? I bought them on ebay, and they're high peeptoe wedges. I was on ebay looking for flat sandals. So, win? This happens every time I decide I'm going to buy flat shoes. I buy ridiculous heels. To be fair, I wear them more than flats. 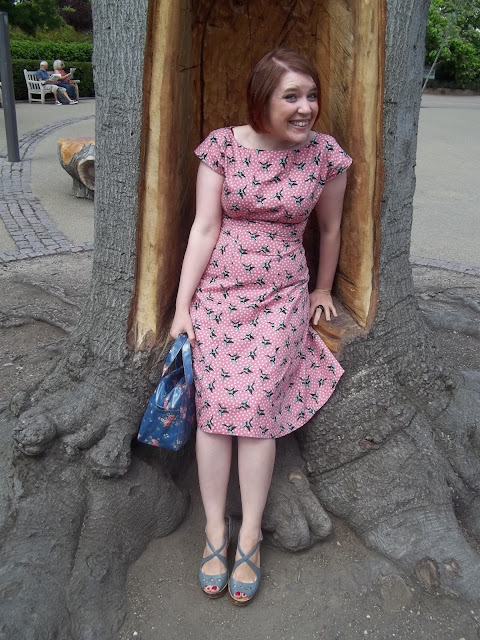 MOST FLATTERING PHOTO EVER. 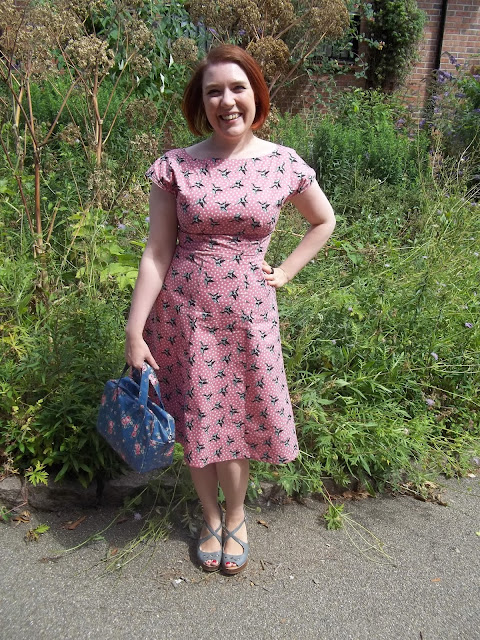 Actually, maybe this is the most flattering photo ever. With added triffids. Which are still not as freaky as lotus seed pods.
Posted by Roisin Muldoon