I didn't know they made champagne in New Jersey.

HOLLA. Hoping this Sunday evening is finding you all well - I'm just coming out the other side of a three-day barometric pressure headache. Those things suck. It's not like a migraine where you can't function, but it's hard to shift, and I get fun things like impaired vision. Woo! Still - it comes and goes, so I was still able to do some fun things this weekend. But. Yeah. Headaches fucking suck.

I managed to miss the 'Red October' hashtag that went round my sewing friends on Twitter last week and, if I'm totally honest, I'm not really a joiner. I'm not really one for sewing to challenges now, they don't work for me. No judgement on anyone, like, but nothing demotivates me faster in my hobby than having a deadline or a prescription. That's just me, though. I can't really explain it. But funnily enough, I have sewed a few things in red recently so I'm going to hop on that bandwagon because why not.

At the Goldhawk Road meetup in August, Kat and I were rooting around in the remnants box in A1 Fabrics, and we each came across a 2m length of really lightweight cotton lawn for £5. I hemmed and hawed on it, but when Kat said she liked it, I said I'd buy some if she did. What can I say, I'm an enabler in that way. I thought I could use it for lining or something, but anyway I decided to make a dress out of it. One based on one of my favourite RTW dresses; this one from Dorothy Perkins: 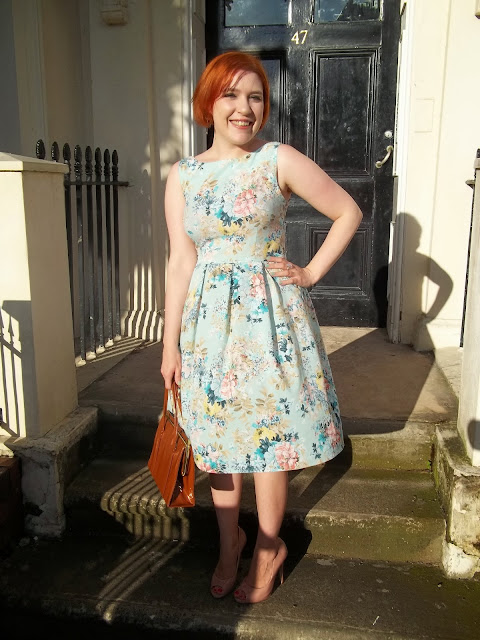 I love this dress! It's made from a polyester viscose and is really light and comfortable to wear, and I think it's very flattering. It has a low scooped back and a lapped zip, which is a nice detail in a shop-bought dress. The viscose has a similar weight and drape to the lawn, and I thought that the bodice from Butterick B5748 and the pleated skirt from NL6824 could work well together for a similar result. And they did, so I made it. And then I hung it up in my wardrobe for ages because I suddenly went off it. Not sure why, to be honest, I just totally lost enthusiasm for the whole thing. I put it on again last week and realised that it's actually pretty cute:

I think my reservations about the dress are connected to how light the lawn is. It's really floaty and soft - which isn't a bad thing in itself - but it's hard to wear because it creases. Also, the flowers in the fabric up close kind of remind me of those lotus pod things; those damn things have kind of ruined a lot of stuff for me because I see them everywhere now! But I'm just griping really, because it is pretty. I don't love it as much as I love that blue Dorothy Perkins one, though.

I'm considering my lunch, here. On the day this photo was taken, we were going to go to Bread and Co. Instead we fell into Kayal for Business Lunch. That's what I call WINNING, although the boiled duck egg in Bread and Co is pretty good as well.

Not much to say about how this dress was made, either. I self-lined the bodice because I had enough of the fabric to do that and I thought anything else would show through. I'm wearing a slip underneath the dress here - I don't think the fabric would be see-through, but it was pretty breezy on the day these photos were taken. That Dorothy Perkins dress is a demon for catching the slightest passing breeze - I once inadvertently flashed some of the daytime drinkers that congregate outside Murphy's Bar on Regent Street, and I was keen not to make that mistake again.

"All right, it's lunch-time now though, isn't it?"

For all my bitching, I will wear this dress. I wear a lot of red - the pink and red section of my wardrobe is the most populated part (YES, I colour-code my wardrobe. I have a lot of dresses. It makes finding them easier) but, do you ever get that? Where something you make is absolutely grand, but it's just...okay? Like, it's not a wadder but you just don't love it? Or am I over-thinking it?

Anyway, that's the Festive Road dress. Festive Road, by the way, is where Mr Benn lived. It's also the opening track on Liberation by The Divine Comedy, and the song is one that often pops into my head when I'm walking down my street (that, and The Street Where You Live from My Fair Lady.)

An ordinary day down on Festive Road
The children will play, and never will know
That when Mr Benn, of number five two
Walks in through that door, peculiar events will ensue

The shopkeeper peers through spectacles round
As Benn wanders in, and shuts out the town
The shopkeeper wears his customary grin
'Cause he knows when they go to try on his clothes
Each fantasy chosen begins...
Posted by Roisin Muldoon