A homeless man showed me his dick on the way here. It doesn't get any realer than that.

Hello boys and girls! What is up? It's nearly Friday, I'm getting to the end of another very busy week, I have fun weekend plans. It's all good. The only thing that would make it better is a glass of wine but I'm already in my pyjamas. You can't have everything, I guess.

So the weather might still suck in your part of the world (I know poor old Gillian is still being snowed on) but it's been really lovely here. It's making me super excited about spring and summer - all the good stuff like not having to wear a coat and being able to eat dinner in the park. You know, all the important stuff! As the day of our wedding draws closer I'm also starting to get really, properly excited about that and about our honeymoon. I might have skipped across the park on Tuesday afternoon, thinking about what it will be like to sit outside in Paris with a glass of vin rouge, watching the world go by.

I still haven't bought fabric for my wedding dress, but my friend Lauren and I are hitting the Knitting and Stitching show on Saturday, and I hope to find some there. Maybe I'll even scout out some shoes when we're in London, you never know. There's still plenty of time for all of that. I have been thinking about sewing fun and flirty dresses to wear in Paris, though... and I think you might know where that leads! 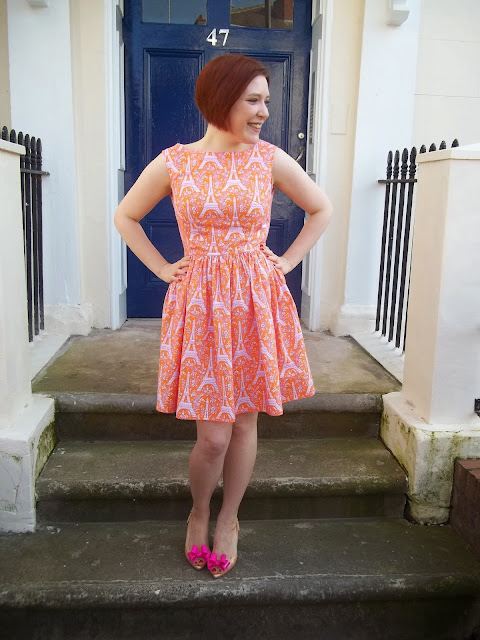 WHAT'S THAT? More of the Michael Miller Eiffel Tower fabric? Guilty as charged, dudes. I love it. I actually bought this in January with the thought of making a strappy dress out of it. But obviously I didn't, and it became an Emery dress instead. I bought this colourway from Ditto Fabrics and I mistakenly remembered it as called Watermelon. It's not, it's called Sorbet. That makes more sense, but there is also a colourway called Watermelon and maybe now I'm going to have to buy that too.

I only bought 1.5 metres of this fabric because I had planned to make a little dress out of it. And it is a little dress! I am becoming more comfortable with getting my knees out, and I think a short skirt works with this fresh, summery colour. Well, even if it didn't, it was all I had. Heh. 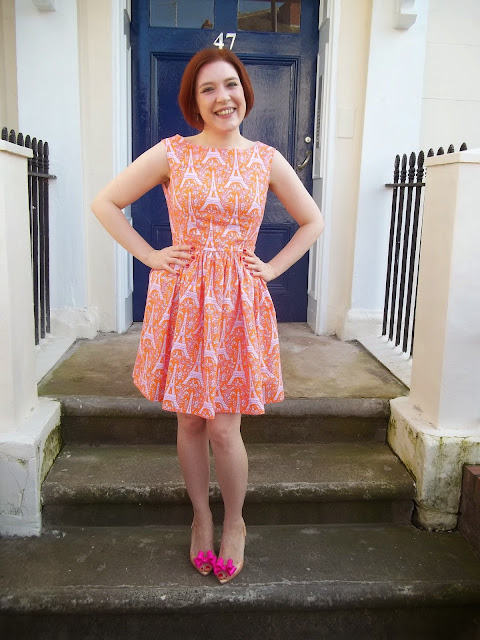 I wore this on Sunday, when it was warm enough to wear peep-toe sandals, leave the coat at home (I did have a cardigan with me) and to eat an ice-lolly on a bench in the park. It wasn't warm enough to sit on the grass - and it was still wet - but it's still only early March so this is a treat. I know we had a mild winter, but it has been grey and overcast for months. Actual sunshine is a real tonic. 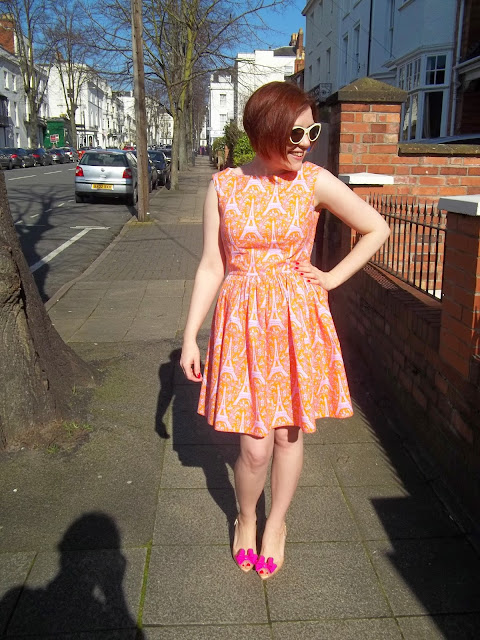 Nothing very much more to say about the Emery dress pattern by this point. It's clearly becoming my go-to pattern! This version (and a subsequent one, which I will blog about soon) came up a little bit big. I got my tape measure out and it turns out I need to re-trace the pattern a size down. This is what happens when you have a stressful job, kids. I'm not too worried about it here because some ease in a summer dress is a good thing - and it leaves plenty of room for all of the bread, cheese and pastry I'm going to eat in Paris. And champagne. 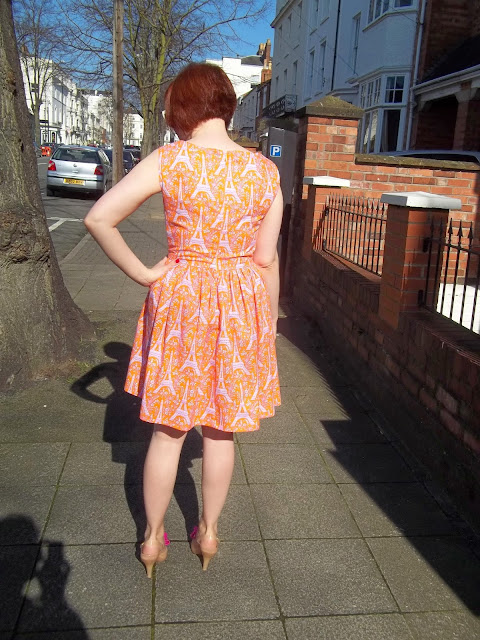 Back view - you can see some of the excess fabric in the bodice and my complete disregard for pattern matching. Hey, my zip looks right though, so that's good. 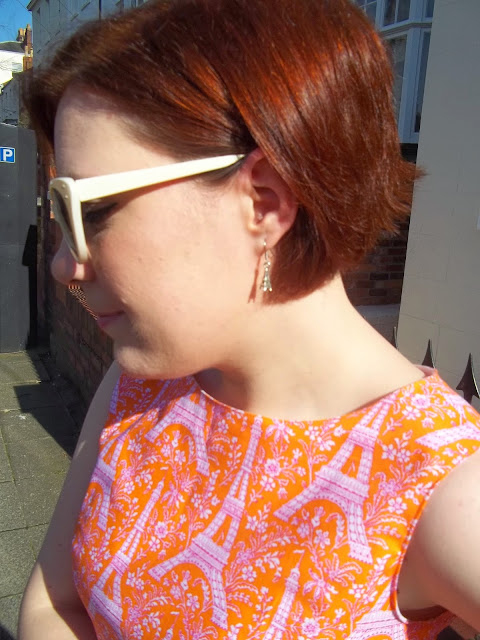 Oh and I wore matching Eiffel Tower earrings, and I was sad that I didn't have Eiffel Tower shoes. Maybe one day.

So, yes. That's one honeymoon dress sorted. I probably won't wear a Paris-themed dress every day when we're away. I'll try not to, at any rate, but it is nice to have something to help me to daydream.

That's the craic with me this evening but before I go, I have to tell you about two exciting things. The first thing is that last week, Argos got in touch with me and asked me would I like to give away a sewing machine and a sewing kit as a prize in the Sew Dolly Clackett sewalong! Of course I said yes, and the machine in question is a cute little Brother LS14. This is a good entry-level machine and it would be a great first machine for someone who is new to sewing, or a second machine for someone who is looking for one. It comes with an adorable polka dot sewing box. I was really delighted when Argos got in touch with me to offer the prize. They very kindly sent me an awesome iron last year but I admit that I hadn't realised they have a pretty impressive selection of sewing machines and accessories too. So yay! I'm going to be giving away a sewing machine!

The other exciting thing to tell you about is that my lovely friends at By Hand London have unveiled their new masterplan - print on demand fabric! Charlotte got in touch with me last month to let me in on the secret, and it's gone live today. They're hoping to raise some starter funds with a kickstarter bid, and they've made a little video explaining the master plan. You can see it here, and if you look carefully you might see a familar goofy face somewhere in the mix. I'm super excited for the girls. Over the last year they've become friends, and it's pretty obvious by this point how much I love their designs - it is amazing to think that, as well as sewing dresses designed by friends, the fabric could have been designed and printed by friends too! That is pretty fucking awesome, is it not?!

All right, pups. I've got to bust a move and make some dinner. Catch you after the weekend. 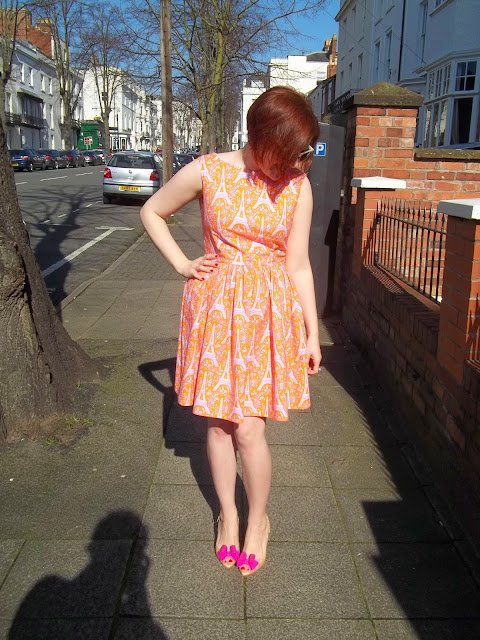 Now, if I can just figure out a way to make friends with the people who design the shoes...
Posted by Roisin Muldoon