Well, I was born Mary Patterson, but then I married and naturally I took my husband's name. So now I'm Neil Patterson.

Hello! It's taken me rather longer to get back to blogging than I intended. I had a weekend of socialising and binge-watching season 2 of Hannibal, and binge-reading Red Dragon so my head was in kind of a weird place. I don't know who is the trashier writer, Thomas Harris or Bryan Fuller, but together they make something sort of sickly and awful but also kind of amazing. Ugh, either way, I need to lay off the serial killer pop culture for a while!

So anyway, I'm back today to show you the rest of our photos from Paris. Don't worry, not all of them, just a little flavour of our holiday. The sun is shining and I'm listening to jazz so I'm feeling a little bit nostalgic, I suppose!

As I said in my last post on the subject, Nic and I mostly stayed within walking distance of our lovely little flat on Rue Feutrier. We did go further afield occasionally - we got rained on in the Latin Quarter (again! The exact same thing happened to us last year as well) and we took the metro and the RER out to Vincennes to go to an outdoor jazz concert at Parc Floral, but I confess that was the extent of our travels. 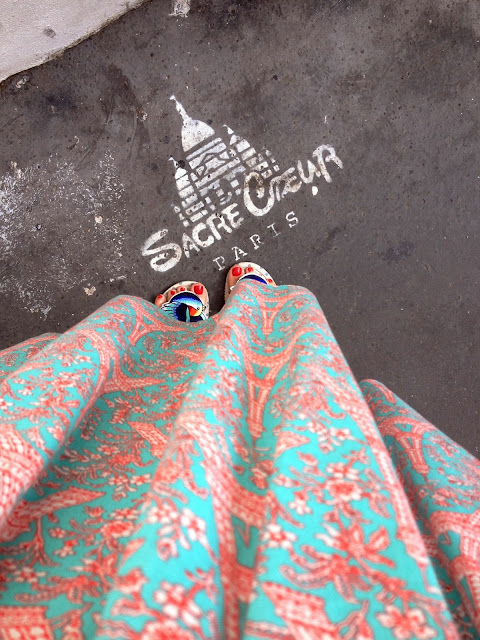 What I wore on our first full day in Paris - Bernie Dexter Frenchie dress and Miss L Fire sandals. This grafitti was all around Montmartre, and in different colours. I took this photo on Rue Muller, but we saw this everywhere. It was so cute! 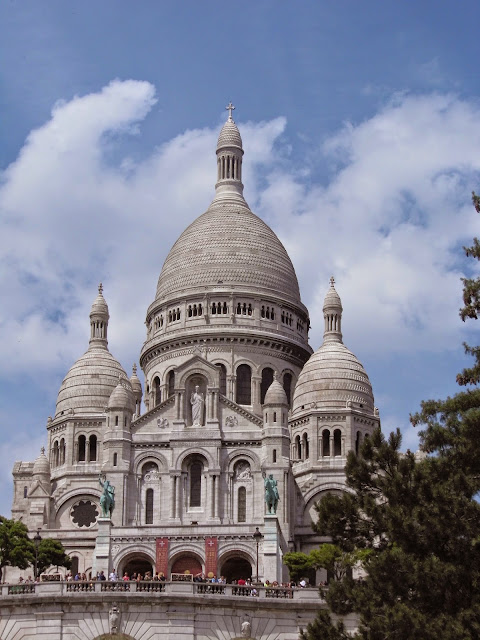 The Sacre Coeur, seen from Square Louise-Michel. I know this is a total tourist photo, but wevs. Before we went to Paris, Nic and I watched Sandrine's Paris. It was excellent, even with the hateful faux-Amélie editing, but Sandrine was pretty disdainful of both Montmartre and the Sacre Coeur. Much like the Eiffel Tower, I get it that Parisians might think this monument is ugly. It's rowdy up at the top and it smells of piss, and the guys selling those hideous friendship bracelets are a bit aggro, but I love it here. Every time we got a glimpse of the Sacre Coeur from one of the surrounding streets, I felt a bit of a thrill. 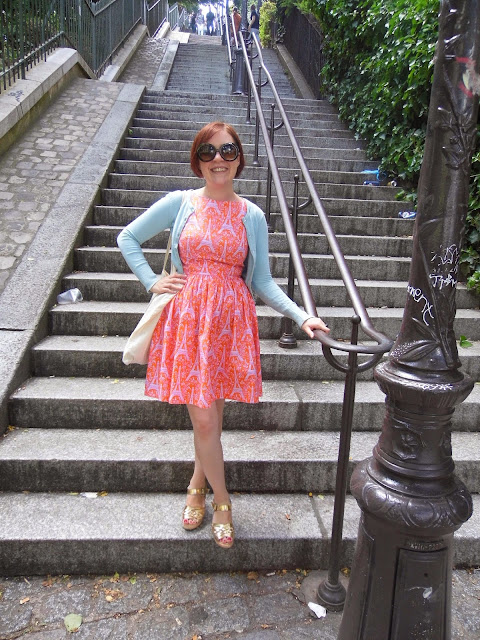 One of my Paris-themed dresses, in Paris! This is the Pasteque dress (Christine Haynes Emery dress) worn with gold high-heeled clogs from Atelier Scandinave, and blue Hell Bunny cardigan. I've often heard that the people in Paris are unfriendly and rude, but nothing could be further from my experiences. It is a bit touristy to wear Eiffel Tower print dresses in Paris, but I received so many compliments on this dress, and got so many smiles! And not just from fellow tourists - I wish my French had been good enough that I could have more graciously replied to the girl in the Patisserie who said, "C'est jolie, votre robe!" These photos were taken on the steps above Rue Paul Albert, which I really think is my favourite place in Paris. 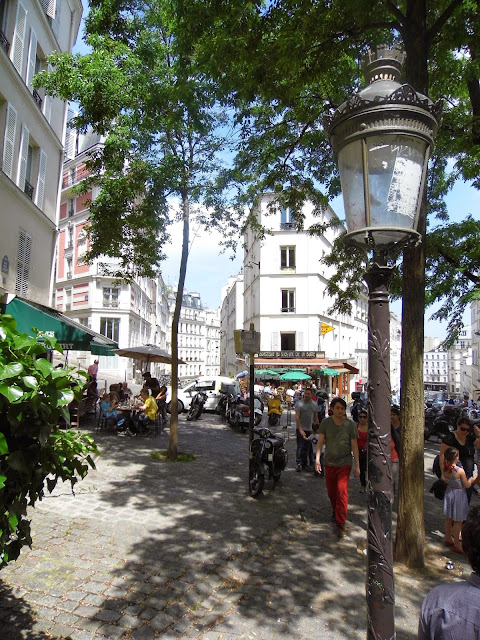 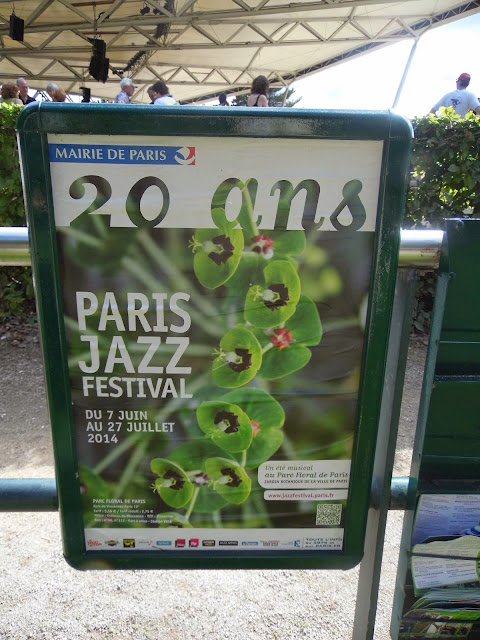 On the Sunday of our stay, Nic and I headed out to Parc Floral to listen to some jazz. When we were setting the date for our wedding, when we could go on honeymoon was a consideration. Well, I had to fit it in around work, too, but the fact that we could go to some Paris Jazz Festival gigs in June was also a good reason for bringing our wedding forward to May. This gig did not disappoint - firstly, the weather was gorgeous and Parc Floral is an amazing venue. 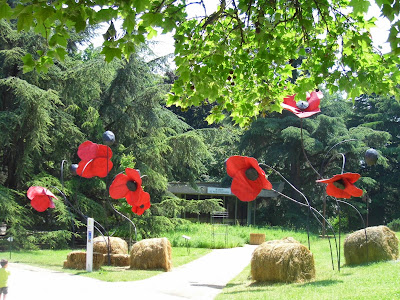 Giant poppies in Parc Floral. I guess they must water them with champagne or something, idk

There were two gigs - one was a guy playing the xylophone on a stage that was set up on a barge on a lake - no kidding - and the second, main gig was the jazz violinist Didier Lockwood. Nic and I initially set up camp near the jazz barge but had to move, mainly because the woman behind me was trimming her husband's toenails and I wanted to boke. SERIOUSLY. We moved closer to the main stage, set up in the shade of a tree and whiled away the afternoon reading, drinking champagne and snoozing, all with the soundtrack of an amazing live jazz gig. That day was like heaven - it was so perfect it was slightly surreal. The only thing that could have been improved on was our champagne could have been colder. But still. Talk about first world problems. 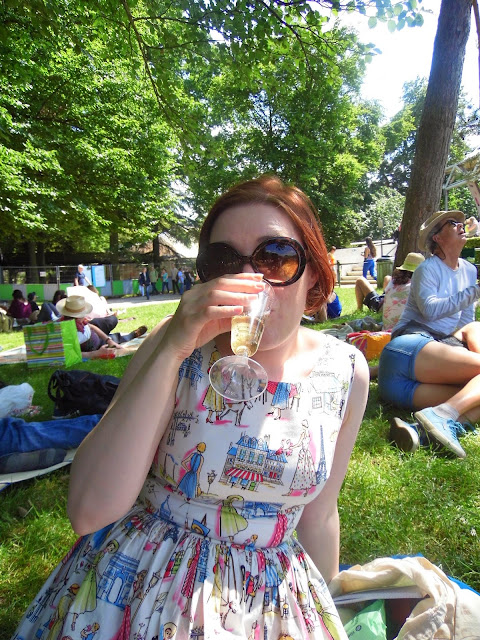 We had made the rookie mistake of not having a bottle of champagne chilling in the fridge, so bought this on the way. It was a hot day and I suppose that carrying the bottle around fizzed the champagne up. I had only just unwrapped the foil when the cork popped out and straight up into the air. It must have gone about ten feet up because it took ages to come down - long enough for the people sitting around us to give us a nice (possibly sarcastic) round of applause! 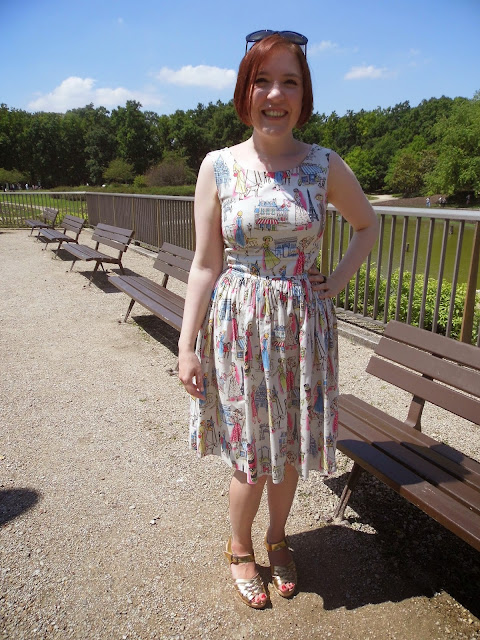 What I wore to Parc Floral - Boum! dress (which I have altered since I made it, as it was too big. I took it in at the side seams) and those gold sandals again. 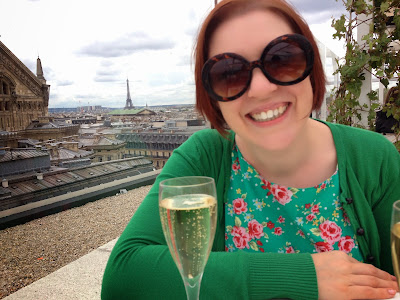 Drinking champagne was kind of the theme of the honeymoon. We drank a lot of champagne. But you know, if you can't drink champagne on honeymoon in Paris, what's the point?! I liked that you could buy champagne by the glass in most bars and cafes, but of course the quality of what you got varied. In this photo, I'm drinking a glass of Moet in the rooftop bar at Galeries Lafayette. Nic and I went for a wander down through the 8th toward the Gare Saint-Lazare without realising how close by Boulevard Haussmann actually was - it's about a twenty minute walk from Montmartre. Anyway, once we realised we were near some of the grands magasins, we decided to have a browse around Galeries Lafayette. It's free to get up onto the roof terrace here and the view is beautiful - you're high enough up to see for miles, but close enough to be able to see things in detail. As we were there, it seemed a shame not to indulge in some accidental glamour and have a glass of champagne. 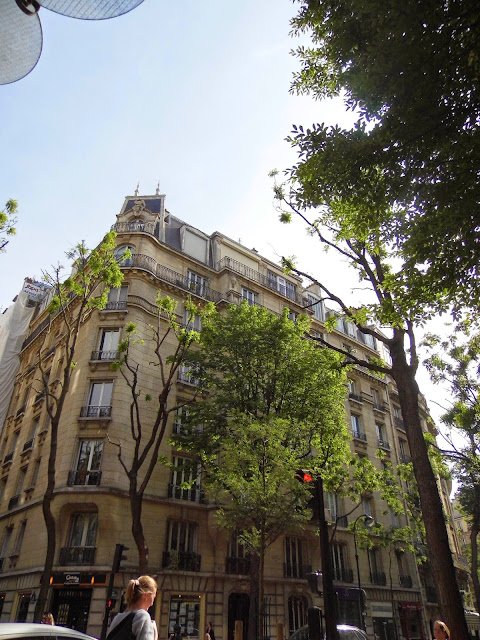 Nic and I spent a lot of our time in Paris just walking around and looking at things - and then sitting outside cafes and looking at things! We'd been to Le Cépage Montmartrois on a previous visit to Paris and caught it a busy time. This time our experience of this cafe was much better and we went back a number of times to drink Sancerre and watch people going about their days. Well, I say watch people - mainly I was looking out for cute little dogs - there were so many cute little dogs in Paris! 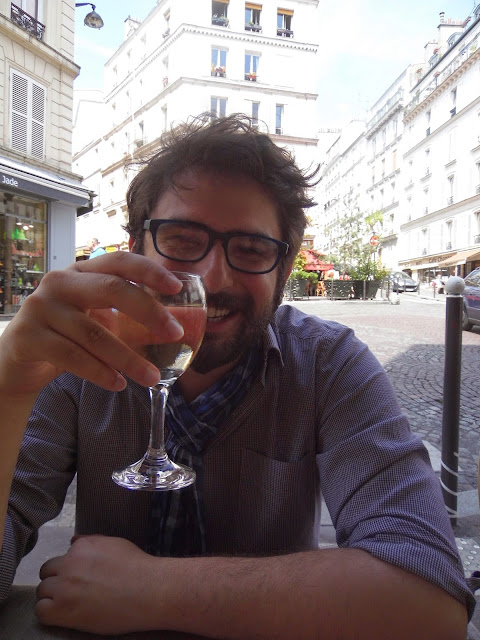 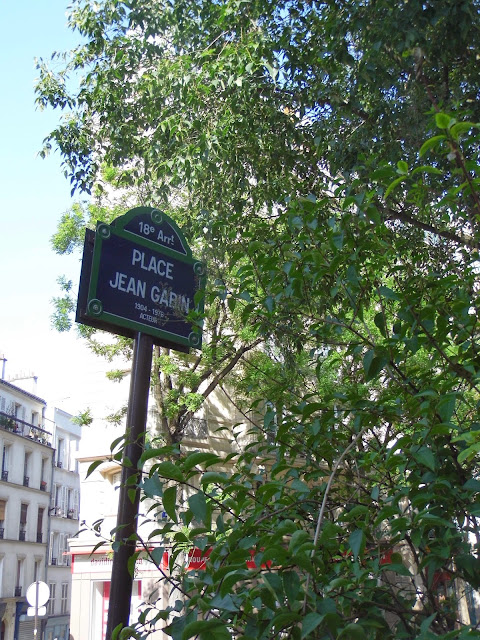 Place Jean Gabin - apparently, he was born in Montmartre! 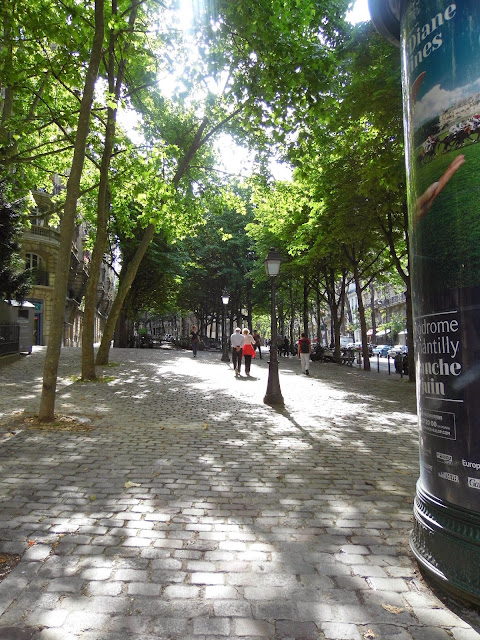 Montmartre in the sunshine. 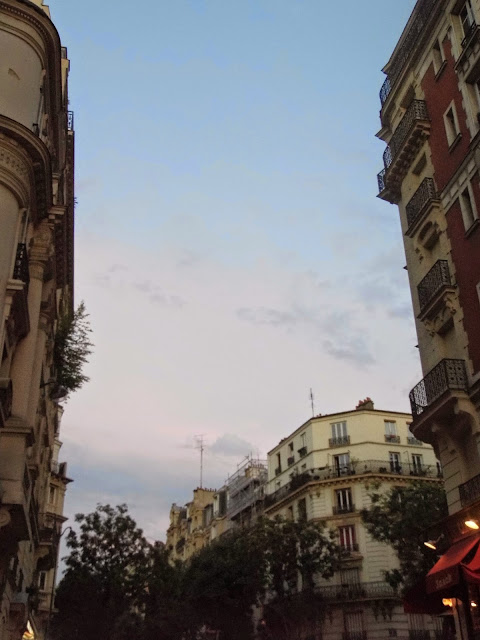 Sunset on Montmartre - I can't remember which street I took this photo on, sorry! 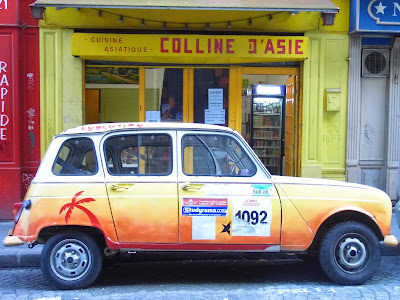 Colline d'Asie on Rue André del Sarte. Nic and I ate here twice in the space of 24 hours and had the same thing both times - vegetarian Bobun. Paris isn't the best place for eating out as a vegetarian - or at least, not if you want to eat traditional French cuisine. We had a few favourite places from previous visits (Au Relais Gascon on Rue des Abbesses for really tasty salads and Trattoria Pulcinella on Rue Eugène Sue for pizza) and we were able to have lots of picnic lunches and dinners, but this place was a real find - and just around the corner from our flat, as well! 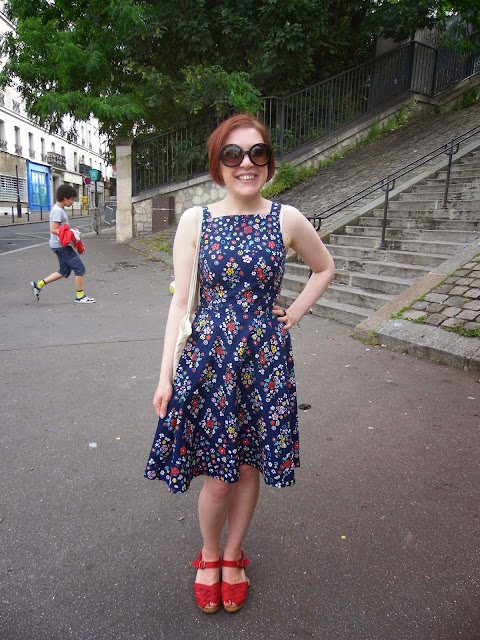 What I wore... actually, I think I just wore this on a random day of fabric shopping and pottering around Montmartre - Aoibhneas na Bealtaine dress and 'Betty' clogs from Lotta from Stockholm. Actually, most days in Paris counted for me as 'fabric shopping and pottering around Montmartre'. I bought a lot of fabric. Our apartment was five minutes away from this... 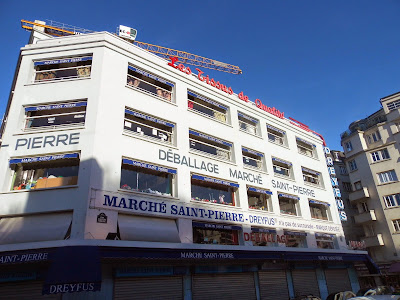 Dreyfus - 'le temple du tissu', according to Dominique Corbasson - taken from Rue Charles Nodier. I won't show you all of my fabric purchases because I bought well over 30 metres of fabric - but here's a little taste... 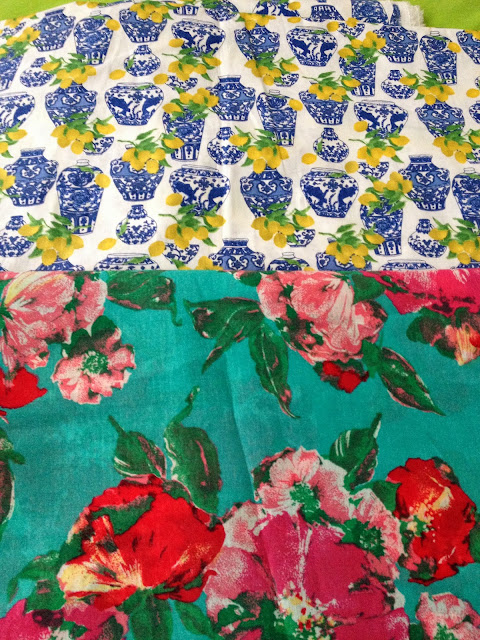 Cotton poplin and cotton voile, both 3m coupons from Coupons de Saint Pierre on Place Saint Pierre. I think I'm going to make a maxi dress with the floral one - I got chatting (in halting French) to an elderly lady in front of me in the queue, and with the lady behind the till and they both agreed that it would be a pretty dress. As she left, the elderly lady wished me "bonne couture!" 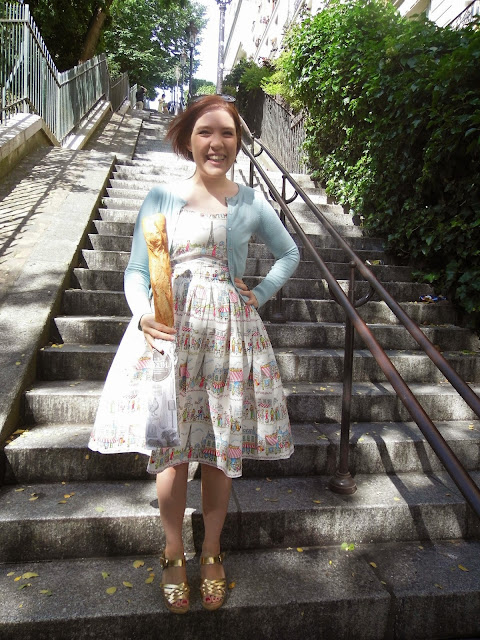 What I wore on our last day in Paris - the Nana dress, blue Hell Bunny cardigan and those Atelier Scandinave sandals again. And a baguette, obviously. Nic took photos of me in this dress on the same steps last year, as well. 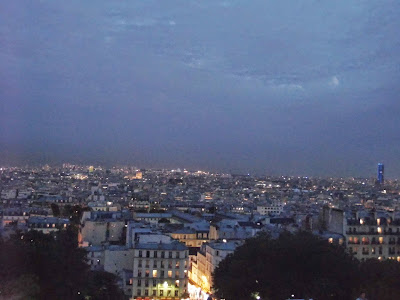 Paris by night, seen from the Sacre Coeur

Thanks for sticking with me through such a self-indulgent post! I promise that's the last of the Paris photos for this year. Well, unless we go back at Christmas, that is. I'm not promising that we won't. I might have sewn through my fabric by then, you see.

I'll be back later in the week to show you some sewing. Before I go, though, I drew the winner of the Sew Over It trouser pattern, and it's Norse Otter! Congratulations - I'll be in touch to arrange to send you the pattern.
Posted by Roisin Muldoon