This leak business is symptomatic of the moral decline of this country since the fall of the last Conservative government.

Yeeeeeeooooo! Howdy folks, what's happening? All quiet on the Dolly Clackett front: I'm deeply immersed in another very intense week at work. I have a lot to cram into the next few weeks, which I've planned for, but there are a couple of unnecessary annoyances that have driven me to distraction over the last few days. Actually my stress levels are not what they might be given the circumstances - one of the things I have learned over the last couple of years is how to manage this better and I have become a bit better at not losing my temper when people are being totally unreasonable. All the same, I will be ridiculously relieved to get to Friday tomorrow, you know? I'm going to try to start the Friday festivities a little early tonight by having a long bath with a drink and a book.

So, that is the craic there. I haven't had much time for anything outside of work this week at all. It's been okay, though. Nic and I had a lovely weekend and we had our friend JP to stay with us at the start of the week too. Our friends Amy and Barney called round on Sunday night to drop off an Ikea Expedit unit to us that they no longer need, which meant we were able to rearrange our living room slightly. Nic now has his records all neatly arranged and I'm not kidding when I say that every evening since has seen him sitting on the floor to look at them and tinker with the arrangement of them. 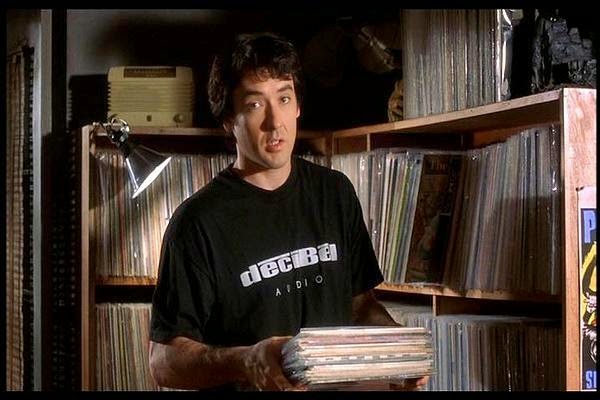 Like this, but with a beard. He's looking at them right now, in fact.

Anyway, as I said - we had a lovely weekend. It was my friend Lauren's birthday last week and we celebrated this by going to the pub on Friday night and drinking prosecco (standard) and spending Saturday afternoon doing a treasure hunt town trail thing in Leamington. I was not at all hungover, thanks to the magic power of chips in pitta bread in chilli sauce after the pub, and it was a dry and mild day, perfect for wandering around Leamington and trying to follow the clues in the booklet. I had a new dress to wear, as well. I actually made this a couple of weeks ago but hadn't had the chance to wear it. Then, as I was falling asleep drunk and full of chips on Friday night, I had an idea of how to wear it and what to name it. Yeah I know. Laugh if you want, but I happen to think that chips are brain food. 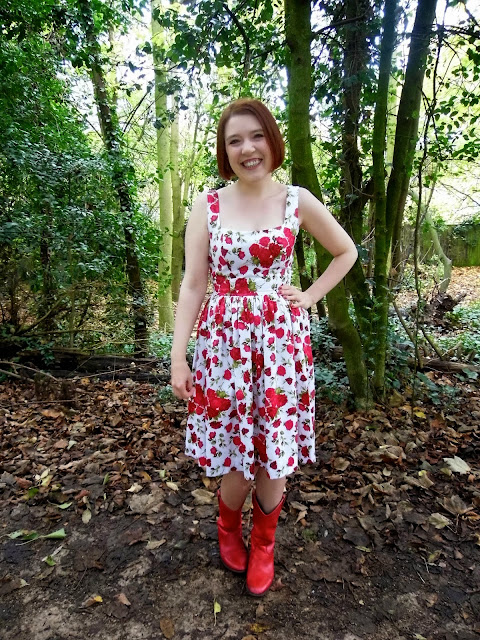 So, the dress! This is the new pattern from By Hand London, the Kim dress. The pattern isn't quite available yet - it's being released on 29th November - but I was one of the pattern testers, so have been able to sew the dress a bit earlier. This is obviously the version with the gathered skirt. However, I omitted the pin tucks along the hem on this one. I did sew them in my test version (which I will post at some point over the next few weeks) but with a printed fabric the effect is sort of lost so I didn't bother with this one. I won't review the pattern except to say that I found very little in my testing to comment on and I believe the finished pattern will be pretty similar to the version I tested. On my first version I sewed a size 10 and had to go back and take it in along the side seams and under the bust, so for this version I sewed a size 8. The only adjustment I made was to sew a slightly larger seam allowance at the side seams and to take it up substantially at the shoulders.

I bought the fabric in A1 Fabrics on Goldhawk Road at some point last year and it's been languishing in my stash ever since. It was fairly cheap, I think it was £4.99 per metre, and I bought two metres. I was able to get this dress and some bunting for my sister out of that two metres so I'd say that was £10 well spent! 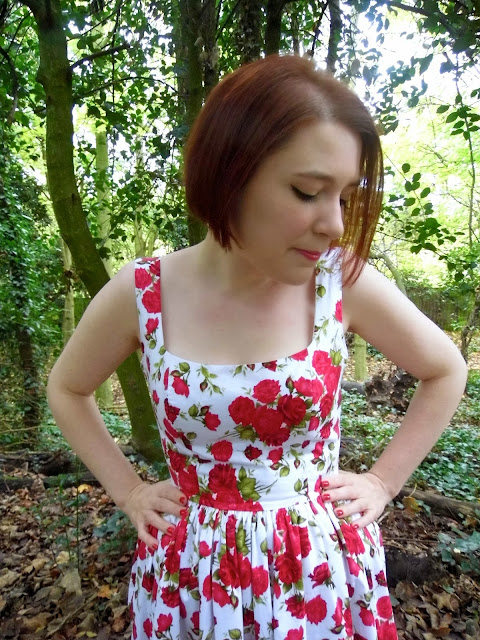 Bodice view - you can see the lovely rose print a little bit better here. Also the close up on the "eating chips in bed at 1am face" I'm sporting here

There's something about this bodice variation - with the straight neckline, rather than the sweetheart variation - that really reminds me of a dirndl. But more than anything else, it really called one TV character to mind for me: Scarlett O'Connor from Nashville. 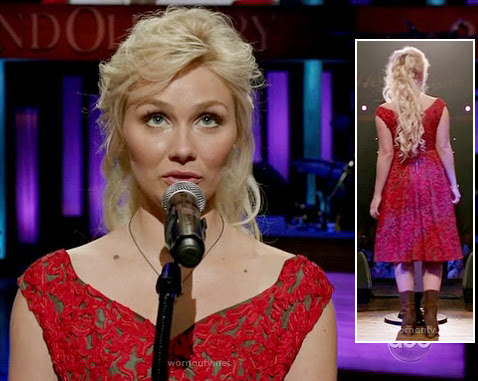 Scarlett wears this red dress when she first performs at the Opry. I'll probably wear something similar myself for my first performance.

I actually find Scarlett to be an almost unbearably irritating character. I don't dislike her as much as I dislike her songwriting partner, Gunnar (we call him Bummer) but she's very dull. I do like her style, though. It's mostly romantic dresses with full skirts, worn with wide belts, chunky belts and work boots. It's not a look I could totally carry off (I'm not all that keen on wearing belts) but it works for her. She's annoying, but she's pretty cute. And, you know, her hair isn't even close to being on the Rayna Scale of Awesome, but I like her hair too. 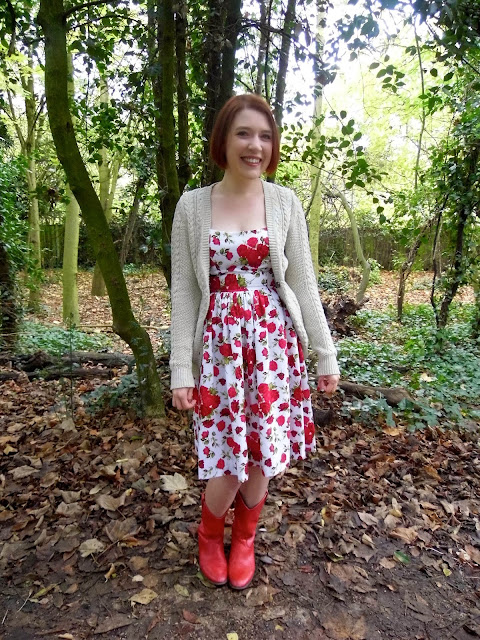 So, yeah. It might be totally lame, but this outfit is inspired by a character I don't even like. My chunky cardigan is from Mango and the boots are pretty old. I bought them seven or eight years ago after watching Wonder Boys - Katie Holmes's character is pretty annoying, but she has some lovely red cowboy boots. 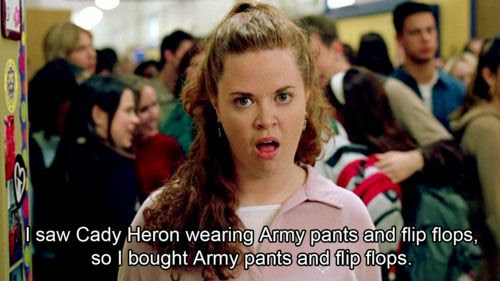 Obviously the fabric and general style of this dress are pretty summery, so I might not get much wear out of it until the spring. I like the way it looks with the cowboy boots and I'm sure I'll wear this combination again over the autumn, although obviously I'm looking forward to wearing it with sandals in the warmer weather. 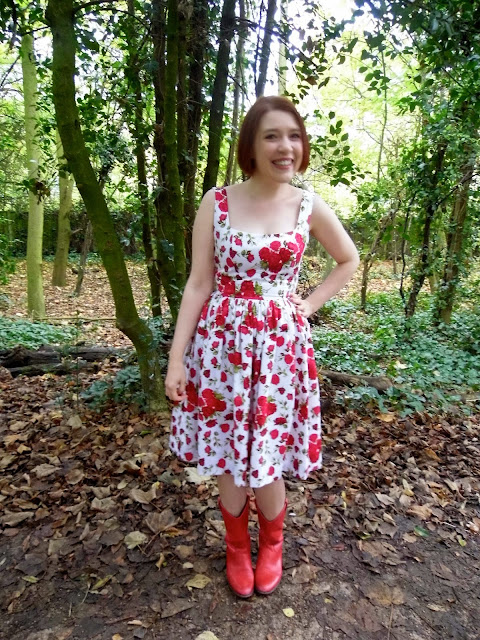 Gratuitous out-take. Don't even know what I was doing here but I look like I'm about to fall over.

So that's the Scarlett dress. I really like the Kim pattern - once I had figured out the couple of little fitting tweaks I needed to do it's a very straightforward and quick dress to make. I sewed this dress - including hemming it by hand - one evening after work. I like a bit of fast sewing! I think there's also a lot of potential for variations - this is another lovely bodice I look forward to pairing with different skirts. All round it's a thumbs up from me for Kim!

Right-o, I have been looking at a computer since about half eight this morning. Time for me to get my gin and tonic and my book. Goodnight!
Posted by Roisin Muldoon