A straight line may be the shortest distance between two points, but it is by no means the most interesting.

Yo yo yo! What's the haps, people? The craic here is limited. I've been working from home today, feeling ill, and spent most of the day on my own scowling at my work laptop, plotting what to buy to cheer myself up. I didn't buy anything though. Not yet, anyway. You know you're not having the best day at work when doing the washing up at lunchtime is a treat though, right?

I did have a lovely weekend, though. The potato and rosemary pizza Nic and I made on Friday night was a resounding success (I mean: potatoes on a pizza. What's not to like) and then on Saturday we went over to Birmingham for an afternoon out.

At the station, I got my favourite kind of train ticket: 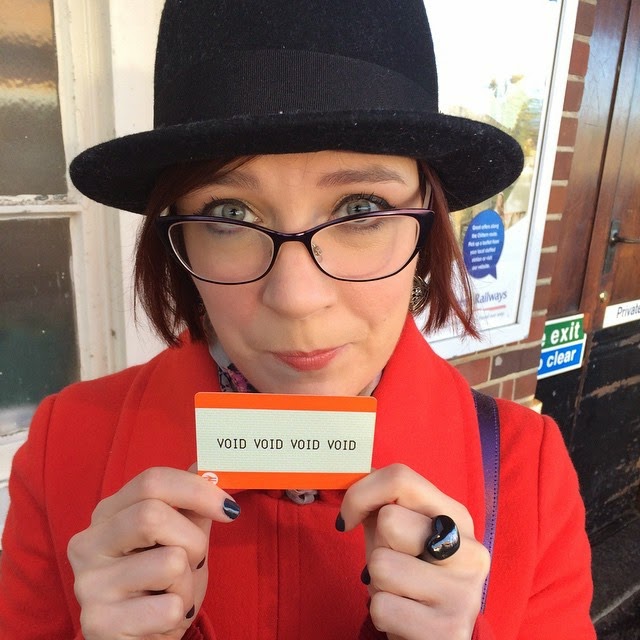 I keep these tickets every time I get them because they're just so fantastically rude. I like to think I'll start handing them out to people who are behaving badly, but really I just use them as bookmarks.

Anyway, we had a great day out in Birmingham. We had a mooch around the shops, lunch at Cafe Soya (where we bumped into Helen and her husband) and then had waiter service to the Hepburn sofa in The Electric while we watched Whiplash. The day was only slightly marred by the football hooligans delaying our train home, but at least I was entertained by the man from Cork who was sitting opposite us on the train. He explained to us how narrow-minded women were before going on to tell the hilarious awful story of how, as a teenager, he shot his friend's dog. Oh, and another dog as well. I should have given him the VOID card, really, but I wanted to keep it.

I was supposed to go to Birmingham again on Sunday to see Whiplash again - Nic is writing about it - but I ended up feeling ill so spent the afternoon dozing on the sofa, watching NYPD Blue and sewing. Not a bad weekend, all in all, and I even managed to get photos of another dress I made back in November. I've worn this dress pretty much weekly since I made it, but for some reason never managed to get photos of it. Lame. 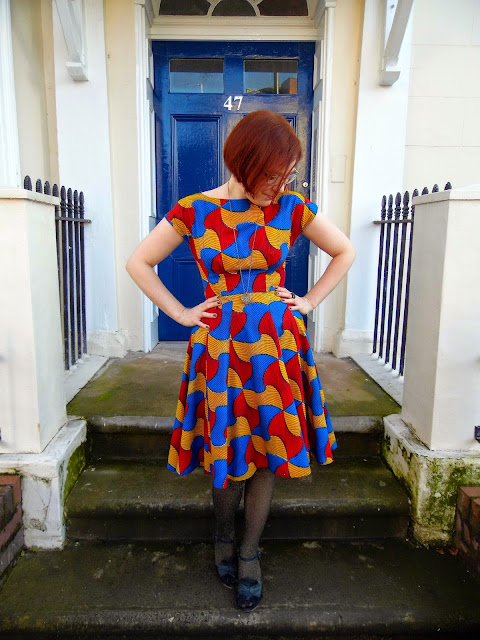 Androzani dress - By Hand London Anna bodice and skirt from Vogue V8998, worn with Irregular Choice Little Miss Oh shoes. You can't quite see them in this photo but my tights are gold lurex, and they're from Topshop.

The dress isn't lame: I am. I love this dress, which is evident by how many times I've worn it since I made it in November. The fabric is African wax cotton, which I bought in Fancy Fabrics on Goldhawk Road at some point in the summer. I think I bought it the day we went to the Jean-Paul Gaultier exhibition at Barbican. Anyway, I bought a 5 metre length of it for £15 and I gave half of it to my friend Lauren. Then it sat in my stash for a while, during which time I wondered if I had bought a ridiculously loud fabric that I would never sew: 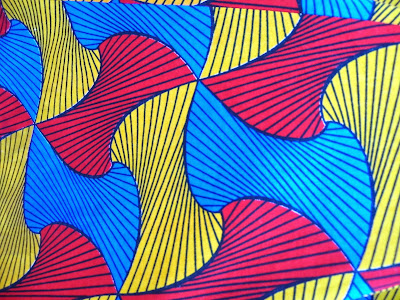 But then I remembered that I am me and I had a wax fabric sewing binge, sewing this and the Stone Flower dress on the same weekend.

There wasn't anything too wild involved in matching the Anna bodice up with the gored circle skirt of the V8998. They didn't fit together exactly and I ended up having to increase the side seams of the skirt a fair bit to get it to match to the bodice neatly but I tapered these back out to 5/8 where the skirt hits my hips, to keep as much fullness in the shape as possible. 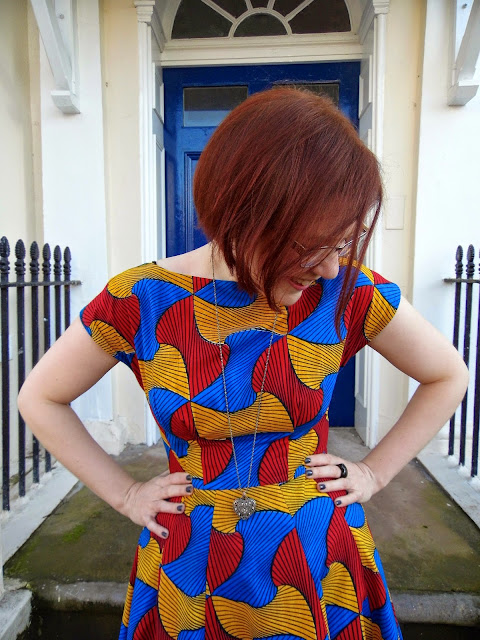 We were caught in the act of taking these photos by one of our neighbours. He was very sweet and called across the street to me that I looked very pretty but he couldn't hide his understandable amusement at the whole endeavour.

The gored skirt of the V8998 works really well with the body of the wax fabric. I love the pairing, and the other dress I made using it - the Bedelia dress - is another one that sees weekly wear. I'm going to London on Saturday and am going to try to make it along to Goldhawk Road to replenish my stash with wax cotton because I love sewing with it and wearing it. 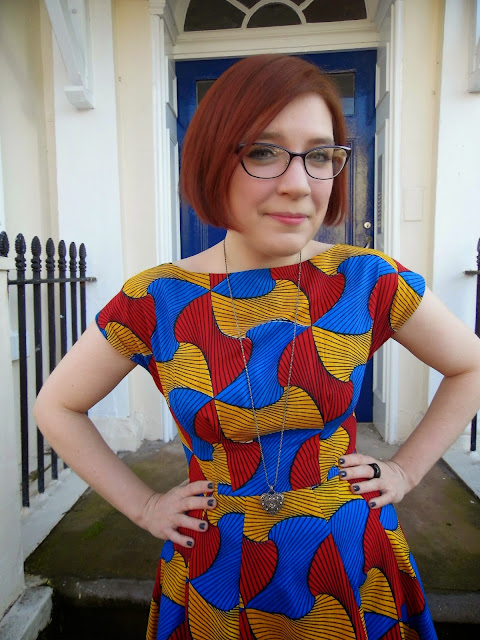 I do occasionally look at the camera. VOID.

That is the craic with this dress. I need to go back to the Anna bodice and make a few tweaks to it - I'd like to take a tiny bit of width out of the centre front and also to shorten it by a fraction. It's grand from the front but it feels a tiny bit long in the back. Then I'm thinking of revisiting this combination with some more Liberty Carline poplin that came through my letterbox last week.

As I sewed the dress, Nic was busy listening to a soundtrack record our friends Rick and Lauren gave him for his birthday last year: 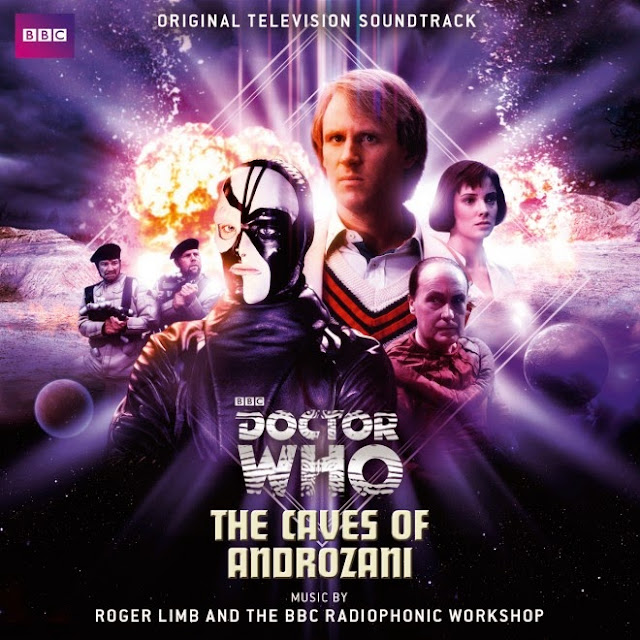 Yes. That IS in fact a double album of the score to Doctor Who: The Caves of Androzani by the BBC Radiophonic Workshop. And yes, it IS as weird as it sounds. Rick and Lauren give such good gifts - for my birthday they gave me an Inspector Morse record and a Star Trek: The Next Generation record. Anyway, it's a very strange and very atmospheric record and it was oddly fitting for the fabric I was sewing with, which reminded me of the bright primary colours of Androzani Major. And, you know, isn't the swirly pattern a bit like Sharaz Jek's monochrome gimp mask? 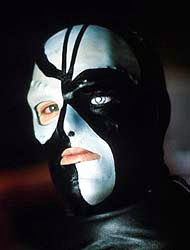 Right-o. I must take my tired self to bed. I know I'm feeling off-colour because I have had a new gin to try and some gin-based chocolates waiting to be sampled since Saturday. This is most unlike me! I must rest up so I can get back to my former powers.

I was going to leave you with a hilarious Caves of Androzani gif, but that serial is kind of serious. Here's a Dalek instead. Night all!