Are you insane? Do you seriously expect me to wear grey out of season? I'd rather hang.

YO! Hello everyone! What's happening, boys and girls?! I'm having a very chilled out Sunday evening, drinking gin and watching NYPD Blue - which, it turns out, is still wonderful even after the death of my TV husband Bobby Simone. Ah, still though. Can we take a moment to think about Bobby Simone? 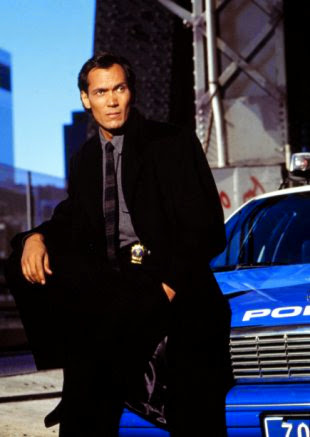 I was ill for most of the week, intensely busy at work and having trouble sleeping. It's not been the best. I had a stomach bug, which left me very depleted in energy, as did the long work days. But I've had a lovely weekend. Nic and I went to London yesterday afternoon to do some fabric shopping on Goldhawk Road and to have dinner with friends in Greenwich and today we've just been straight chilling and watching Nashville. Which, omg. I've loved season 2 even more than I loved season 1.

Juliette Barnes is my girlfriend. Obviously the character I identify with the most is the high-maintenance bitch.

I've been too tired to sew this week. Too tired to knit, even - I've been trying to cast on the sleeves of my Agatha cardigan but have actually lost count now of the number of times I've had to frog that shit. I'm really struggling to get the lace pattern right on the short rows - would appreciate tips on that - but last Sunday, I did sew a new dress. Here it is! 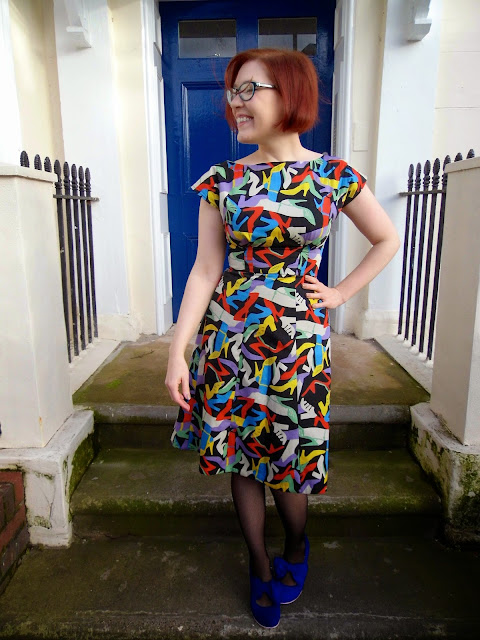 Another Anna dress. Yay! I've had this Liberty poplin in my stash since September, when Katie very kindly picked it up for me from the Ray Stitch sample and clearance sale. I think it was £25 for two metres, and after the Ray Stitch ladies tweeted a picture of it, I knew it had to be mine. It was so kind of Katie to go along and grab it for me! Anyway, it's been patiently waiting for the right pattern since then but I became more and more sure that it had to be an Anna dress. So Anna it was.

Very little indeed to say about this dress, which I made last Sunday afternoon. Just that it makes me happy. 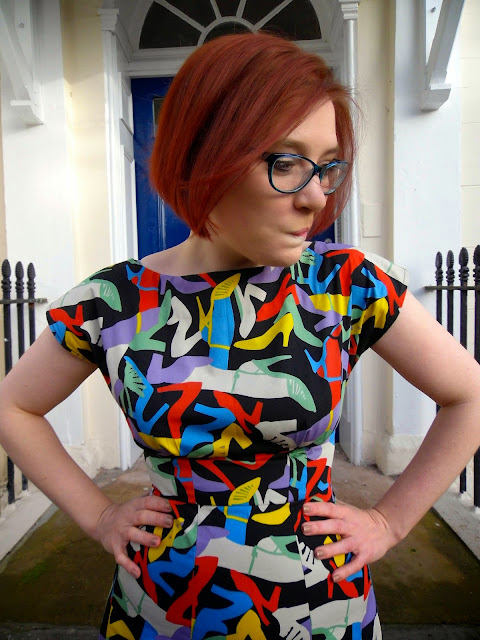 One of the things about being known for having a large shoe collection is that you run the risk of being given shoe-themed gifts. Now this isn't always a bad thing - getting gifts is lovely and it would be churlish to suggest otherwise - but I'm not normally interested in shoe-related paraphernalia. I don't own books about shoes, or shoe-shaped earrings. There is a lot of nasty shoe-themed crap out there. Luckily, my friends have good taste so apart from one horrible shoe-themed calendar that I got in a secret santa thing years ago, I haven't had to worry about having to pretend to like things like shoe-shaped phones or wine holders or whatever.

I like this fabric, though. It's almost abstract enough not to be shoes, but then BAM. Shoes. As shoe-themed things go, it can stay. 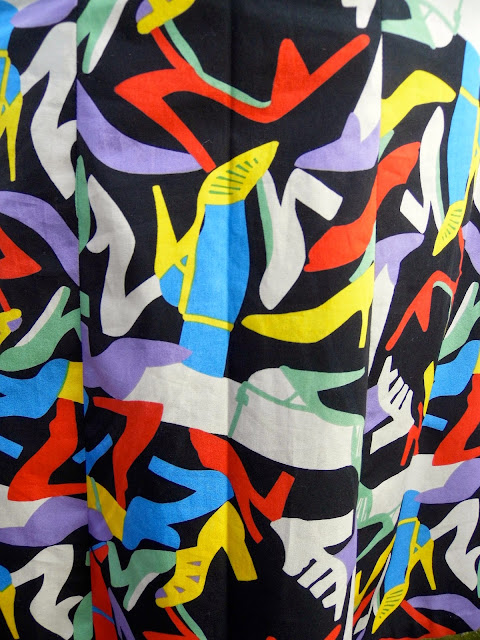 The main thing this fabric has me wondering is whether I can pull off wearing blue tights with yellow sandals. NO NOT REALLY. It looks great in the print, though. I don't normally sew with or wear much black, but of course the great thing about this is that I can wear it with lots of colours. It's going to work well in the last weeks of winter but I think it will see some wear in the spring, too. And I have shoes of every colour to wear it with!

I'm often asked how many shoes I have and how I store them all. The truth is, I don't know how many pairs I have (just as I don't know how many dresses I have) because I am both very good at buying shoes, and fairly ruthless at getting rid of the ones I don't wear. But it's true to say that I could do with more storage in our little flat. 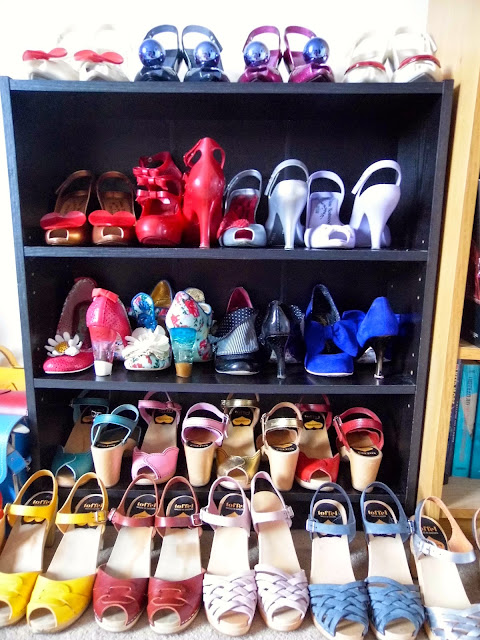 This is a small cross-section of my shoe collection. 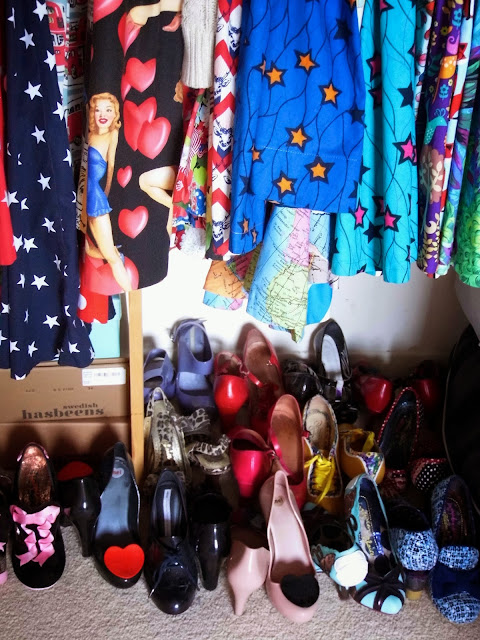 I keep some in the wardrobe, although it's hard to keep them neat in here... 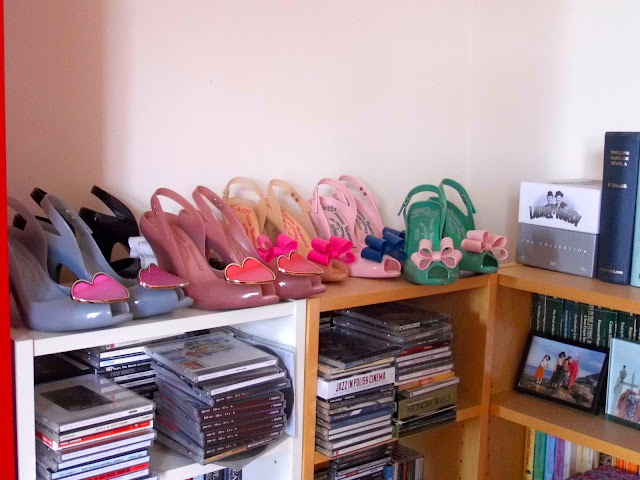 Some live on top of one of the bookcases in the living room, alongside the complete Laurel and Hardy and my beloved O'Donaill dictionary.

The eventual plan is to maybe get another Ikea Billy bookcase to house some more of my shoes, as well as some more books. A more sensible idea would be not to buy any more shoes but that seems unlikely.

Anyway - I had a far more articulate blog post planned than this one when I took those photos earlier today but a combination of gin and crying (not because of the gin, but because of NYPD Blue) has kind of chased the words away. Here's another picture of my dress instead: 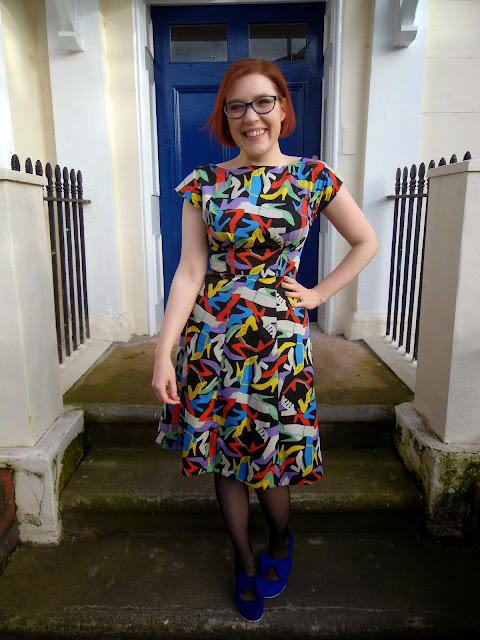 I think I am becoming somewhat addicted to Liberty poplin. Yeah I like the tana lawn and everything, but the poplin is the boom ting to sew with. It's so crisp and well-behaved, and it is SO nice to wear. After years of kind of holding out on the Liberty love, I get it. Any more of it I see, I'm buying. In case you can't tell from the photos above: when I like something, I LIKE IT.

Now, I'd better mosey on. I have a long-ass day at work tomorrow and I need to go and get mentally ready for it. I'm going to do that by watching an episode of Maid Marian and Her Merry Men. Night! 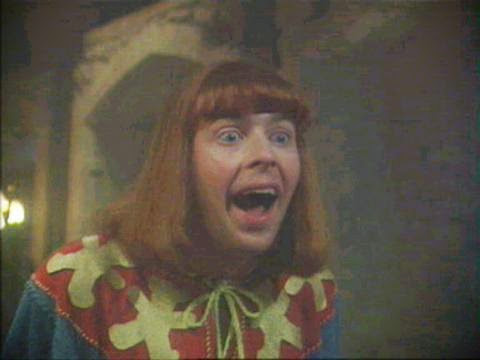 *Bonus points to anyone who gets the reference. It's not that obscure, but bonus points anyway.
Posted by Roisin Muldoon