The important thing is the rhythm. Always have rhythm in your shaking. Now, a Manhattan you shake to fox-trot time, a Bronx to two-step time, a dry martini you always shake to waltz time.

Hey hey and Happy New Year everyone! I hope your holidays were everything you hoped they would be. The alcohol poisoning incident and a bout of insomnia (ugh) aside, mine really were. This year was the first time Nic and I have ever spent Christmas together and it was just wonderful. We stayed in Leamington and, while it was strange not to spend the festive season with my family, it was fantastic to finally start our own traditions. We did the Christmas food shopping and the last few bits of present shopping on the Monday and Tuesday before Christmas, went to the pub with friends on Christmas Eve and, rather than watching a festive film, watched A Perfect Murder.  In fairness, we tried to watch Scrooged but it was just too much Bill Murray. I mean, I like Bill Murray, but there is just too much of him in that film. And there is no such thing as too much Michael Douglas, amirite? He's so disgusting. I love him. Also, we have the same birthday. I'm slightly younger.

I think A Perfect Murder is an underrated classic. For one thing, Michael Douglas being evil is Peak Michael Douglas. He plots with his wife's lover to have her murdered, but it goes wrong. Then, Poirot comes in and solves the shit out of it. Well, kind of. Gwyneth Paltrow really does the solving, Poirot just gives her some line about putting the crime together in lots of ways and not being able to find the missing piece or some shit. I think the best thing about it though, is the "art" perpetrated by Paltrow's lover, Viggo Mortensen: 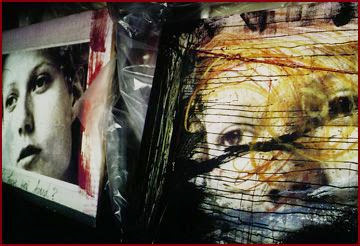 Viggo Mortensen made this art himself, you guys. In a studio owned by Dennis Hopper. I love that.

So anyway, that got our Christmas off to a cracking start. On Christmas morning Nic and I opened our presents, lazed around eating chocolate and went for a walk before cooking dinner together in the evening. It was just perfect.

A few days before Christmas, I sewed myself a dress to wear on Christmas Day. Now, real talk: I wore this for a few hours between taking off my pyjamas and putting my pyjamas back on. A pretty woven dress in a light-coloured fabric is not what you want to be wearing when you're eating a roast dinner that involves gravy. Well, maybe you do. I don't. 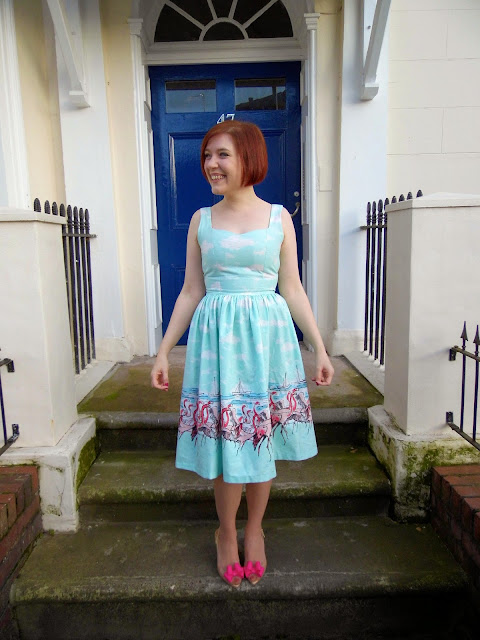 Now, another reason why this dress didn't get worn for eating Christmas dinner is that it is pretty snug. This is partly down to the fact that, because this is a border print, I cut the whole thing on the crosswise grain and partly because it was Christmas and I have my winter coat on. I doubt very much that I will wear this dress a lot between now and the spring, by which time it will fit better because I won't be eating cheese three times a day. Still - I should also say that it looks tighter than it actually is. Although this fabric is gorgeous it is one of those that just always looks wrinkled.

It is gorgeous though, isn't it?! 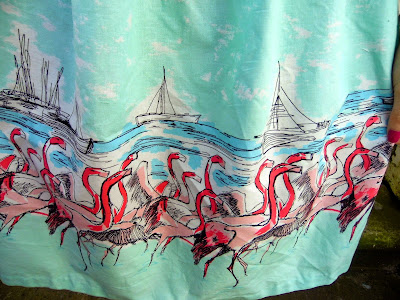 I bought the fabric from The Village Haberdashery. I'm not sure if they have any in stock at the moment - I know the first bolt of this sold really quickly - but I believe that they're getting more in soon. I bought two metres and used most of it to make the dress. The flamingos run along one selvedge and I used the entire length of the selvedge for the skirt. I have a bit of the cloud print left, which I might make a cushion cover or something out of. I had to cut the bodice cross-wise as well to get the clouds running the right way up: 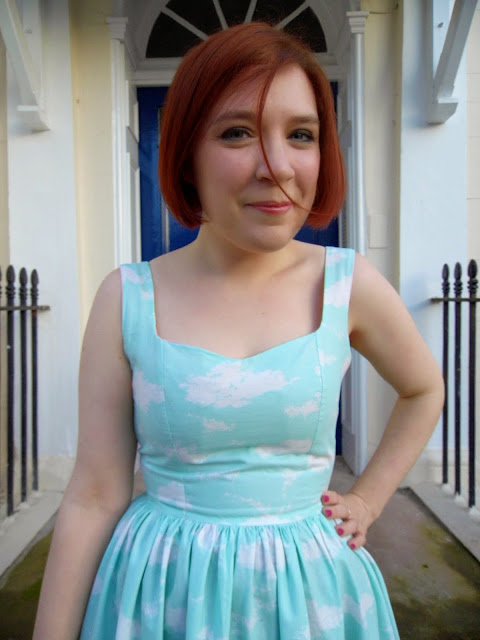 I haven't taken any photos of the inside but the bodice is lined with pale pink cotton and I finished my seams by turning and stitching. Luckily there was enough room between the bottom of the flamingo print and the edge of the fabric so that I could give the dress a reasonable hem without sacrificing any of the print. Bonus! I wore this dress with one of my lovely Christmas presents from my parents-in-law; a cherry-blossom print scarf: 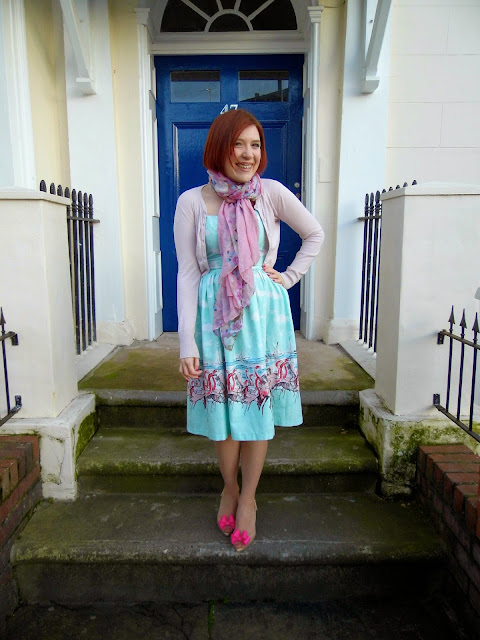 So, that's my Christmas dress. Not at all Christmassy, but that means I can wear it during the summer as well. Logic!

The in-between time between Christmas and New Year was very quiet. After a mild few weeks it became very cold so we just holed up in the flat with DVDs, books and chocolate, venturing out only to see friends and potter around the sales. I had the most middle-class Leamington Boxing Day ever by buying a pair of wellies in Joules (not even in the sale) and then having a coffee in Carluccio's.

Nic and I don't tend to make much of a fuss on New Year's Eve and this year was no exception - we went to Coventry with our friends Amy and Barney to go to Ikea and then have late lunch/early dinner in the (completely awesome) noodle bar in the Bull Yard. Nic's grandparents had very kindly given us some money for Christmas, which we decided to put towards buying a new sofa. We've lived in our flat for six and a half years and it's almost entirely furnished with Ikea furniture. Our sofa had been a Klippan. It was great for the budget we had when we moved in and it did good work, but it was definitely time for an upgrade to something we could both comfortably stretch our legs out on! We ended up buying a new sofa, rug, bedside cabinets and a coffee table and then, you know, mini Daim bars and plates and lamps and stuff. We came home and built the bedside cabinets and then saw in the New Year drinking a bottle of Moet - the last bottle of champagne from our wedding - and watching After The Thin Man.

My New Year's Resolutions are much the same as Nora's: Must scold, must nag, mustn't look too pretty in the mornings.

For two Ikea delivery men, 2015 started by nearly dying carrying a sofa up five flights of stairs. For us, it was building a sofa hungover and totally rearranging the living room. We went for the Karlstad sofa in 'husie orange' and it is AWESOME. It's bigger than the sofa we had and although it would have fit in the same place, we thought we'd give the configuration of the living room an overhaul while we were at it. 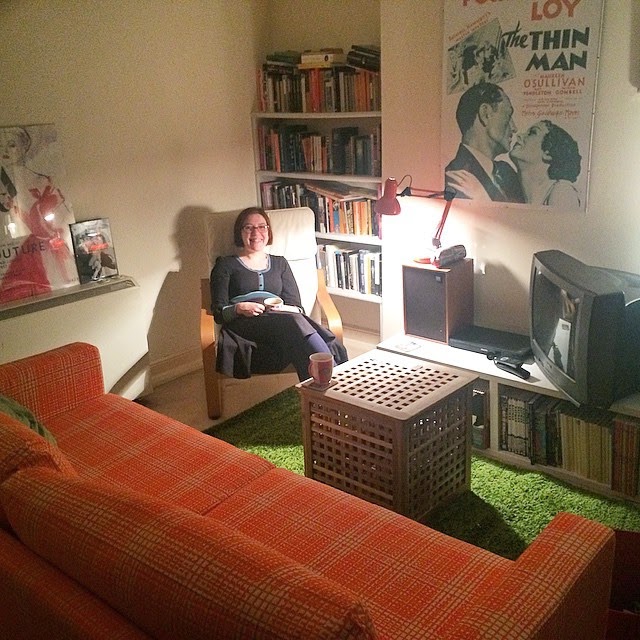 I now have a little knitting corner, lit by the orange anglepoise lamp that Nic bought me for Christmas. Also: bright green shag rug. I love it! And here's one of the sofa: 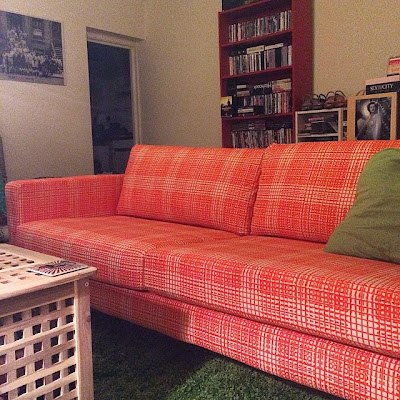 Orange has kind of been an inadvertent theme - as well as the orange lamp Nic bought me for Christmas, we ended up buying orange lamps for the bedroom: 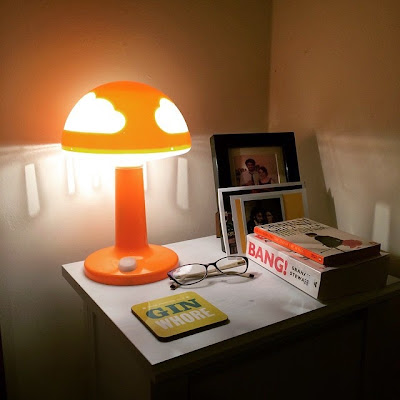 The lamps are called Skojig and they're from the children's section. Somewhat embarrassingly, on the Ikea website they're in the section along with accessories for children aged 3-7 but WHATEVER because they're excellent and the on/off switch glows in the dark. I love lamp.

So I've ended up spending the first few days of 2015 giving the flat a deep-clean and rearranging things. I also ended up rearranging the furniture in the bedroom and it's given the flat a new lease of life. We rent so there's not much we can do in terms of decorating but the new furniture has made the place feel fresh and new again. 2015, we're ready for you!

Right. I must be off as it's the last night of the holidays and I want to celebrate with a gin and tonic and a trashy DVD. I wonder if it's too soon to watch A Perfect Murder again. Probably not, right? 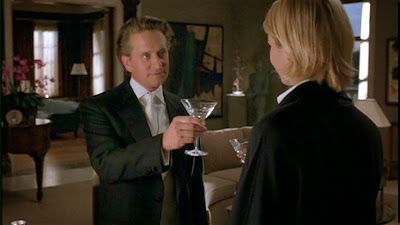