I may have just burnt the house down, but I made damn sure you were in it when I lit the match.

Helloooooooo! Long time no write, isn't it? I'm sure that 2015 is going to be a good year, but the first six weeks of it has been kind of kicking my ass. The last few weeks in particular have been a bit intense and I'm a little bit burned out, so I haven't had much time or energy for sewing or blogging. So, this post isn't going to be sewing related and it's going to be a little bit of a whine because, fuck it.

Well, it's not going to be a total whine. Good things have happened in the last few weeks too! Nic and I have spent lots of time having fun with friends. While I haven't had the energy to sew, I have been motivated to get back into knitting. With help from a few of you lovely readers who commented on my last post, I finally cracked where I was going wrong with the sleeve on the Agatha cardigan and now I have one and a half sleeves. Hurrah! 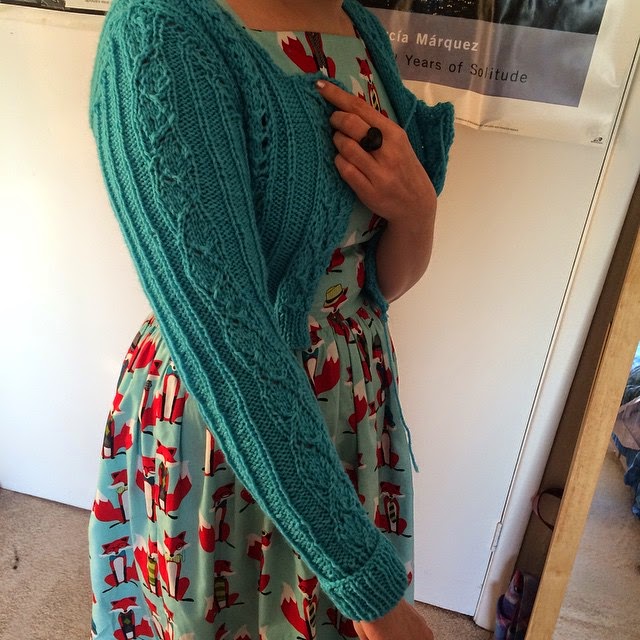 Yay! I had been getting tripped up on the distinction between knitting the lace repeat flat on the short row sections and knitting it in the round for the rest of the sleeve. To you non-knitters to whom that reads like a foreign language: I KNOW RIGHT. This sleeve is far from perfect - my stitches aren't as even as they could be - but I'm so happy to have cracked it. I'm hoping to get the rest of the second sleeve knitted this week and maybe the button and neckbands over the weekend. I might have this finished soon!

It's been good to have a small, manageable project on the go at home. As much as I am (still) enjoying my job, the last few weeks have been really overwhelming. This is a really crucial time of the year in my job and, although I have been through it over the last four years, this year is the first where I have had all the responsibility for my project. I've been working extremely long hours - I worked 27 hours over my contracted hours in January- so as well as having a lot to do, I've been exhausted.

Unlike in other areas of my life - notably in my sewing and housekeeping, where I am pretty relaxed - I've become a bit of a perfectionist at work and have been putting myself under pressure to get everything done to a very high standard, and to get everything right first time. That's not always possible with the deadlines we work to, and I have been struggling with a near-constant feeling of guilt for not - I don't know, bending the rules of time to get more done? It's stupid. It has seeped into other areas of my life as well and I spent Saturday night in floods of tears for no reason, because I feel like I'm not doing anything as well as I could be or should be at the moment.

Yesterday at work I realised that a mistake had not been picked up in a piece of my work - not even my mistake, just one I hadn't noticed - and, even though it was totally minor, easily changed and arguably not even a mistake - I ended up so upset that I cried. I fucking hate crying at work because it is lame, and this was a stupid thing to be crying about. I don't think anyone else would have cried about it because it was so easily sorted out, but I was unreasonably upset by it.

So all of this is totally irrelevant to sewing but it explains why I haven't been around much. I'm hoping to see some improvement in the next while - I think that understanding why I have been feeling so inadequate will help me to feel less so, and that will make me feel more excited about sewing and blogging again.

While it's still cold, the fact that it's starting to feel like spring is going to be on its way eventually is bound to help. I've been doing a little springtime shopping and I bought a new coat and a new satchel (and, you know, my clog collection is growing all the time) which I took out for a spin on Saturday: 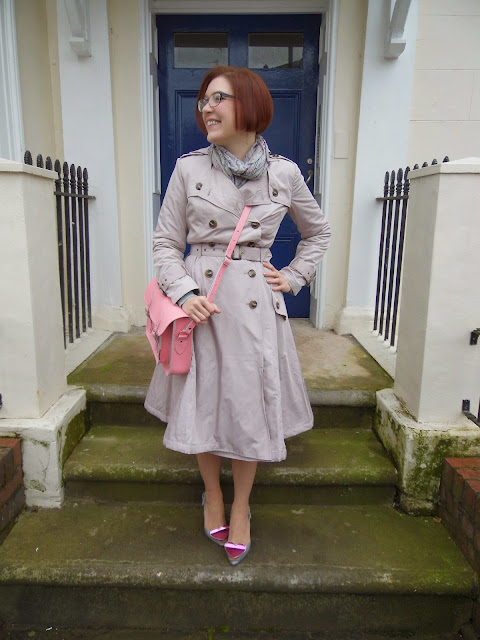 I used to have a lovely trench coat. It was just from Tesco, but it was a great fit and a lovely shape. I stupidly lent it to someone who never gave it back, and I have been looking for a good replacement ever since. I'm not sure this Collectif raincoat is it, but it'll do for running about in. I've liked the look of their 'Dietrich' trench coat for a while, and this is the companion coat. It's the same cut, but waterproofed, and it was £29 in the sale so I thought it was worth a punt. It's too long in the bodice and probably a bit too long in the skirt for me, but that's fine. The buckle broke the first time I did it up, which I'm not thrilled out, but I can live with. It's grand, and I'm sure it will come in handy. I'm going to keep looking for a replacement for my Tesco coat, though.

I really love the pink satchel, however. It's awesome! I have quite a collection of Zatchels satchels now - I have the 14.5" satchel in cornflower blue, yellow and red, the 11.5" in green and neon yellow floral and a metallic purple saddle bag. Every time I see someone with a different colour, it makes me want another one! I saw a girl on the tube a few weeks ago with a pink one, so when I saw this pale pink one in the sale I bought it. It's a 13.5", which is the perfect in-between size. I use the 14.5" satchels for work, and the 11.5" is basically just big enough for my purse and my phone, but this size is a good weekend size. But mainly I just wanted a pink one. Practicality wasn't my first concern, to be quite honest.

So, that's an update from me. Sewing hasn't totally ground to a halt, however. I was sewing at the weekend - pattern testing the new By Hand London pattern, Sophia. It's pretty damn cute, and the whole thing has got me pining for warmer weather... 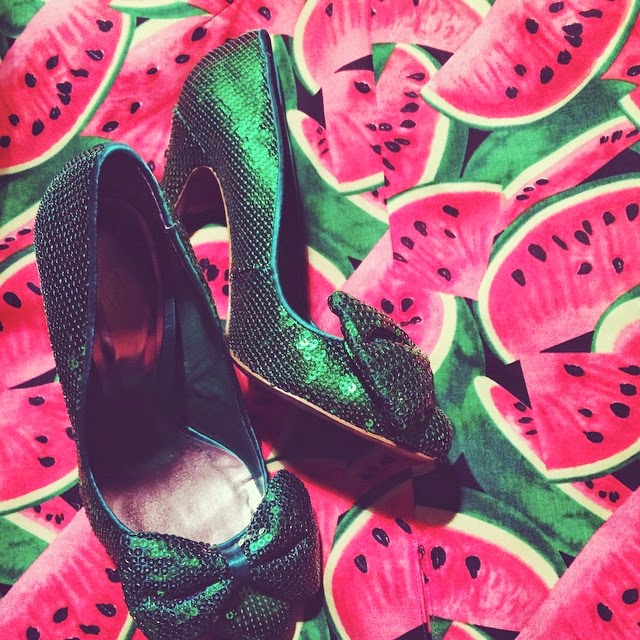 The shoes! I will write more about those shoes in a future post but, for now, see my comment above about practicality not being my first concern.

Okay boys and girls. If you've made it to the end of this post: well done! Go and have some gin! I will be back soon with more cheerful news and possibly even a new dress. Goodnight!
Posted by Roisin Muldoon